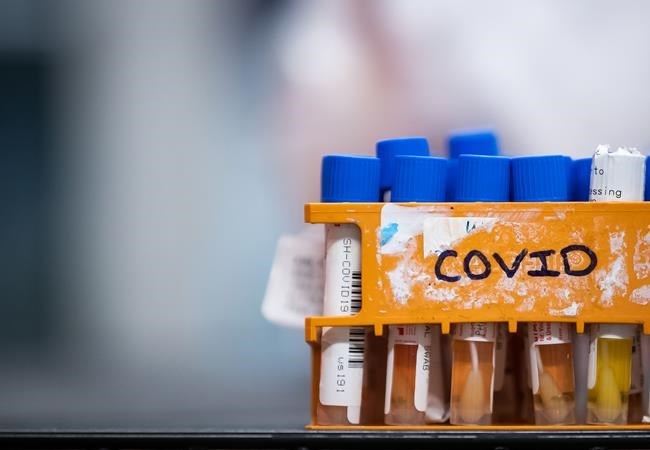 TORONTO — Ontario's overly cautious approach to COVID-19 testing is endangering lives and hindering efforts to rein in soaring infections that are ravaging long-term care facilities, filling ICU beds and lurking silently in communities, say critics alarmed by the province's admission that labs can handle nearly four times the number of tests they receive.

Dr. Camille Lemieux, chief of family medicine at the University Health Network, expressed frustration Wednesday over revelations the province has been sending roughly 3,500 tests a day to its labs of late, even though labs can accommodate 13,000 tests.

Lemieux says doctors knew for weeks that testing rates fell short of growing lab capacity, but had no idea the gap was this large.

Even though community assessment centres are told on the one hand to use their clinical judgment to administer COVID-19 tests, she says doctors are also told to adhere to provincial criteria. Currently, that includes testing people who have symptoms and also fall into prioritized groups, which include health-care workers, travellers and long-term care residents and staff.

"We occasionally get people walking in because of course, we're a storefront, and those people are unfortunately frequently told 'No, we will not test you,' despite having symptoms or a high suspicion on our part that they're COVID positive," she says.

"I can't describe to you the level of frustration that puts on those of us who are working and really want to be testing more broadly."

Less than two weeks ago, Ontario was buckling under a huge backlog that hovered near 11,000.

Public health officials acknowledged Tuesday that lab capacity has grown significantly and that the push is now to get community assessment centres to permit more people to take the test.

"The capacity issue isn't what it was — they should be testing," Dr. Barbara Yaffe, Ontario's Associate Chief Medical Officer of Health, said of guidelines that restrict tests, even for some who display COVID-19 symptoms.

"We're also looking at more testing in facilities where there's an outbreak, more testing with health-care workers as appropriate, in Indigenous communities and so on, and there's an expert group that's going to be reporting very shortly (on) testing strategy.... We don't want to go overboard and end up with another backlog."

Ontario's chief medical officer of health, Dr. David Williams, said the fewer tests seems to coincide with fewer people using the province's telehealth service and its online assessment tool, which tells people whether they meet the criteria for COVID-19 testing.

"It may be evidence of some flattening," he suggested, admitting he preferred to "be optimistic" in believing it could be due to fewer travellers and fewer people with symptoms.

"We're not trying to limit (testing)," he insisted.

Williams cautioned that testing too widely would produce "biased" data that skew too heavily towards negative results when the goal is to reflect the population-at-large.

He also said global demand for testing and laboratory supplies is still high, requiring continued rationing, even as criteria is expanded.

"Sometimes these things ebb flow and we could get into another surge again. And if you compromise yourself — so you used up your reagent and your swabs and your supply — someone would ask at that time of the crucial need again: Why are you not more vigilant and cautious in your use of those supplies?" said Williams.

Tara Moriarty, an associate professor in the University of Toronto's faculty of medicine who started a petition calling for increased testing capacity, said this step is crucial to suppressing COVID-19's spread and its impact on the health-care system.

"The ramifications of this delay in testing scale-up is enormously problematic for the most at-risk populations, seniors in assisted living and LTC homes. Testing should have been massively scaled up there last week," says Moriarty.

"This is a big problem."

This report by The Canadian Press was first published April 8, 2020.

Cartoonists to thank frontline workers playfully this Sunday
Jun 2, 2020 5:38 AM

What does a post-COVID restaurant look like? Dining experience might lose appeal
Jun 2, 2020 2:00 AM
Comments
We welcome your feedback and encourage you to share your thoughts. We ask that you be respectful of others and their points of view, refrain from personal attacks and stay on topic. To learn about our commenting policies and how we moderate, please read our Community Guidelines.