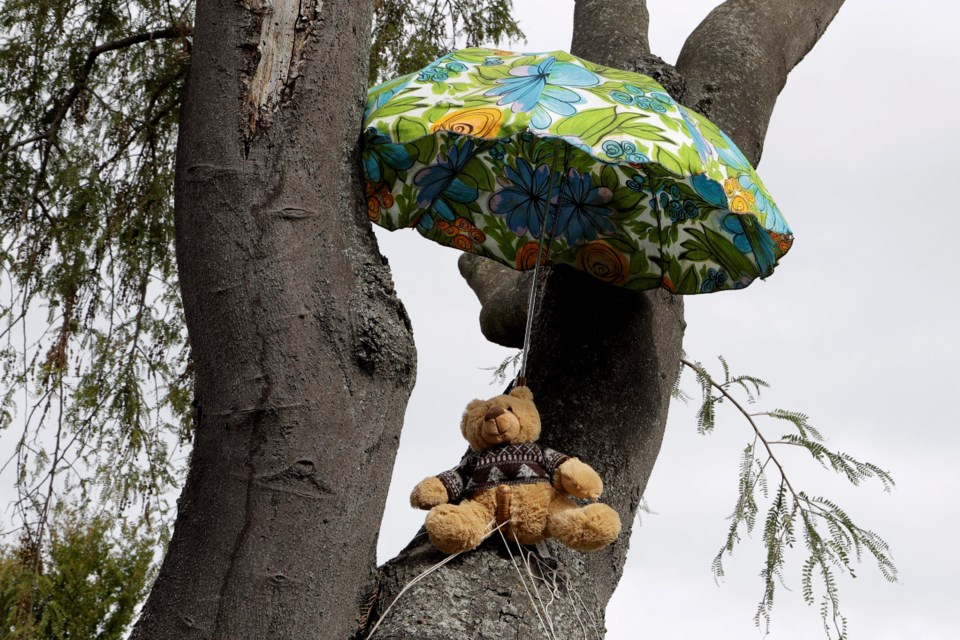 WELLINGTON, New Zealand — Some are perched in trees. Some are hanging upside down. Some are baking scones.

Teddy bears are popping up in the unlikeliest of places as New Zealanders embrace an international movement in which people are placing the stuffed animals in their windows during coronavirus lockdowns to brighten the mood and give children a game to play by spotting the bears in their .

The inspiration comes from the children's book “We're Going on a Bear Hunt,” written by Michael Rosen and illustrated by Helen Oxenbury.

New Zealand last week began a four-week lockdown but people are still allowed outside to exercise if they keep a safe distance from each other. In other words, bear-spotting is okay.

Mother-of-two and part-time school administrator Deb Hoffman started the Facebook page "We're Not Scared - NZ Bear Hunt" and also set up a where more than 120,000 people have now put pins on an online map to show the location of their bears. “We're not scared” is a repeated line in the book, which features a family overcoming a number of obstacles in their search for a bear.

Hoffman said she's been taken aback by the huge response. She said some people are creating personalities for their bears by having them do a different activity each day.

Hoffman said one woman wrote that the teddy bears were the only thing getting her through the isolation, after she had already been housebound for six weeks following surgery before the lockdown began.

“It's a way for people to feel connected, and to contribute,” Hoffman said. “It's really important at a time like this.”

Hoffman said she's getting some help to enhance her so that people will soon be able to interact with the bears by giving them an emotion.

Prime Minister Jacinda Ardern has even joined in, saying people should keep an eye on her window because they might spot a bear.

In a grimly ironic twist, the author of the book is hospitalized with symptoms similar to COVID-19.

Rosen’s family said Tuesday that the 73-year-old writer was “poorly” but improving, having previously spent a night in intensive care.

Rosen’s wife Emma-Louise Williams tweeted: “He has been able to eat today & will be getting a more comfortable oxygen mask soon. All good signs.”

She did not say whether Rosen had been diagnosed with the new coronavirus. In recent weeks, Rosen has described his illness on Twitter, wondering whether symptoms including fatigue and fever meant he had COVID-19 or a “heavy flu.”

Carl Bernstein says 21 GOP senators contemptuous of Trump
Nov 23, 2020 7:42 PM
Comments
We welcome your feedback and encourage you to share your thoughts. We ask that you be respectful of others and their points of view, refrain from personal attacks and stay on topic. To learn about our commenting policies and how we moderate, please read our Community Guidelines.