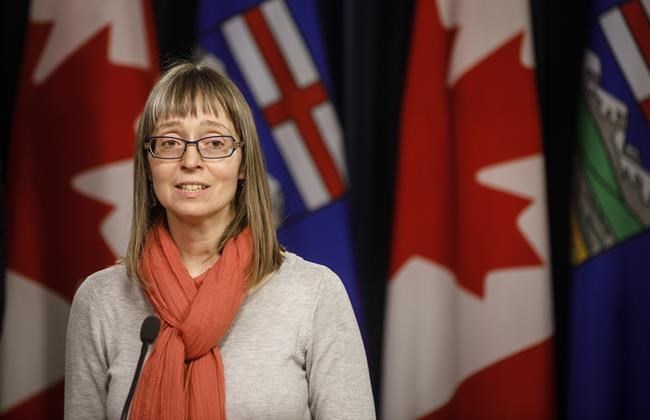 Dr. Deena Hinshaw says COVID-19 case numbers have hit a plateau and officials need to make sure they aren’t heading in the wrong direction.

She says they will wait until at least March 1 to get a better handle on the trend before making a decision on further reopenings.

Hinshaw also says they have promised businesses a week’s notice to prepare, putting the earliest date for lifting more rules at March 8.

Alberta is reopening its economy in stages, as long as case numbers are moving in the right direction.

“Our cases are starting to plateau instead of continuing to drop,” Hinshaw told a news conference Monday.

“We are seeing steady numbers of new variant cases. Our vaccination campaign needs several more months to reach the majority of our population.

“We must be extra cautious. If given the chance, this virus will spread widely and we risk losing the gains that we have made together.”

She noted there are positive signs: 179,000 doses of COVID-19 vaccine have been administered, and 69,000 people have received the full two-dose requirement.

Last week, the government announced all residents in long-term care and designated supportive living facilities – those at the highest risk from COVID-19 — have been vaccinated.

Alberta has completed the first of its four-stage reopening plan for businesses and public gatherings, tied mainly to hospitalization rates.

Premier Jason Kenney said last week the second stage of easing restrictions may start as early as March 1, but only if case numbers and trends merit it.

As of Monday, Alberta had 4,675 active COVID-19 cases and there were 53 people in intensive care.

Those numbers are a small fraction of the soaring caseloads that threatened to overwhelm the health system in December, prompting Kenney to impose a second round of economic restrictions.

Restaurants are open with health restrictions in place, while retailers can stay open at sharply reduced customer capacity. Entertainment venues, such as bingo halls, movie theatres and casinos remain shuttered.