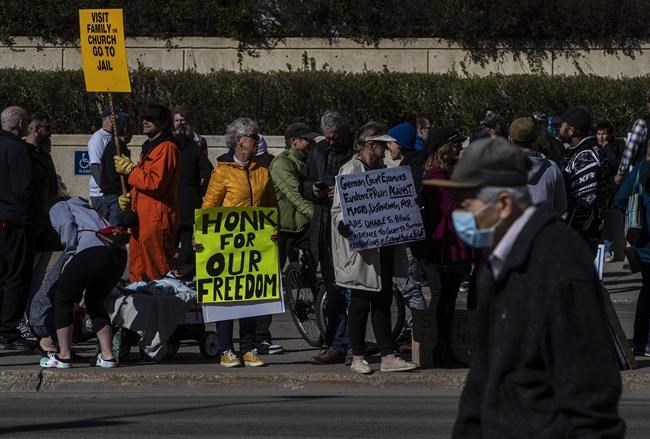 EDMONTON — An Alberta pastor accused of leading church services in violation of public-health orders says the COVID-19 pandemic has been blown out of proportion by the government and the media.

Pastor James Coates of GraceLife Church testified on the first day of his trial Monday and complained multiple times about how difficult it was to speak with a mask on.

The 41-year-old, who was born and raised in Scarborough, Ont., spent a month in the Edmonton Remand Centre after he violated a bail condition not to hold church services that officials have said ignored measures on capacity limits, physical distancing and masking.

Coates challenged the one charge he still faces of violating the Public Health Act during his cross-examination.

He says provincial regulations meant to curb the spread of COVID-19 not only infringe on his and his congregants' constitutional right to freedom of religion and peaceful assembly, but he's convinced they are an overreaction.

"It's the government that's practicing civil disobedience and, at this point in time, there seems to be no accountability," he said.

"The government has been able to essentially do whatever it wants and you've got the media that just fearmonger the people into believing the COVID narrative, and the supreme law of the land, the Charter, is being ignored. The long-term ramifications of that toward this promising country are deeply concerning to me."

Coates testified that he believes masking is a violation of his charter right to worship and gather because it has hindered his speaking and made it difficult for him to be a pastor. He said having services online or capping the congregation at 15 per cent also altered the true meaning of worship.

A Crown prosecutor, whose identity is under a publication ban due to security concerns, called only one witness.

On Nov. 22, she said she arrived at the church before the service had begun and said there were a few people inside. Only some had masks on, she said.

Hanrahan said she made several recommendations to the church's pastor about what they could do to reduce the spread of COVID-19 -- such as signage on the door to remind people about physical distancing, wearing masks and using hand sanitizer.

She also recommended the church have separate entrance and exit lanes for congregants passing through its double doors.

On Dec. 13, Hanrahan said more complaints about the church prompted Alberta Health Services to return, but that time she arrived with two RCMP officers because she was concerned for her safety.

She said she saw 200 congregants of GraceLife Church singing, cheering and clapping next to each other and dozens of people standing shoulder-to-shoulder in the lobby of the building, which has capacity for 600 people. The 15 per cent limit that was in effect by the government allowed a total of 92 people to be inside the building.

Hanrahan testified that was also the day she heard the pastor tell an RCMP officer that Alberta's chief medical officer, Dr. Deena Hinshaw, was a dictator and Premier Jason Kenney was hiding behind her.

On Dec. 20, Hanrahan said a ticket was issued to Coates for breaching the 15 per cent capacity limit.

Coates, who is represented by lawyers with the Justice Centre for Constitutional Freedoms, testified the church followed regulations in the beginning of the pandemic after two members of the congregation tested positive. He said others got tested to make sure the virus hadn't spread.

"They all came back negative," he said.

The church also held services online last June, but Coates said he heard Premier Jason Kenney call the pandemic an over-reaction and compare the virus to influenza as the pandemic progressed.

Coates said he then became convinced the public health measures were excessive.

He said the church had 37 Sunday services without any positive cases before it was shut down and fenced off in April.

The pastor said the church has continued holding services since then and they have seen an increase in congregants.

Coates will continue his testimony Tuesday.

This report by The Canadian Press was first published May 3, 2021.

This story was produced with the financial assistance of the Facebook and Canadian Press News Fellowship.

Note to readers: This is a corrected story. An earlier version said GraceLife Church was in Stony Plain, Alta.

Police hand out tickets to dozens leaving anti-lockdown protest in Alberta
May 8, 2021 5:49 PM

Canada's Einarson eliminated at curling worlds after 8-3 loss to Sweden's Hasselborg
May 8, 2021 5:31 PM