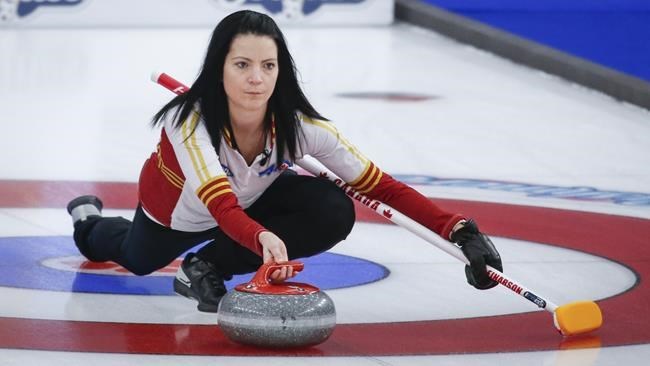 Homan drew even with Einarson at 4-0 atop Pool A with an 8-3 win over Nova Scotia's Jill Brothers.

Ontario and Canada were the only teams among 18 without a loss Monday at the Scotties Tournament of Hearts.

Homan is in the third trimester of her pregnancy. Before her first game Saturday, the 31-year-old from Ottawa hadn't thrown a competitive rock since November.

Curling clubs shut down by the COVID-19 pandemic, Homan had few chances to adapt her delivery to her changing body.

"Definitely taking that much time off when your body is changing is definitely a scary thing," Homan said after her first game.

The three-time national champion remains determined to play every game of the tournament, however.

"I'm here to play," Homan said Monday. "I'm excited and feeling really grateful to be on the ice. As long as my body can hold up and handle what we're doing out there, I'll be there for all the games.

"I'm super-proud of my team. They're playing phenomenal in front of me and making my job easy, and sweeping phenomenally. It's just a lot of fun out there."

Einarson was idle Monday evening after doubling Kerry Galusha of Northwest Territories 8-4 in the morning.

It was a makeup game rescheduled from Saturday when Galusha's vice Jo-Ann Rizzo was ill.

N.W.T. rebounded at night with a 6-5 win over the MacKenzie Zacharias's Wild Card Two.

Galusha and Northern Ontario's Krysta Burns, who was an 8-7 winner over Yukon's Laura Eby, were even at 2-2.

The loss to Ontario dropped Nova Scotia to 2-3 alongside Peterson. Zacharias was 1-3 ahead of winless Yukon.

Pool B was more congested with Quebec's Laurie St-Georges, Prince Edward Island's Suzanne Birt and Wild Card One skipped by Chelsea Carey tied at 3-1 atop the standings.

St-Georges handed Carey her first loss of the tournament and pulled Wild Card One back into the pack with an 8-7 victory.

The 2021 Hearts is running in a spectator-free, controlled environment to prevent the spread of the virus.

St-George and her front end of Emily Riley and sister Cynthia St-George are just two years removed from the junior ranks.

They along with vice Hailey Armstrong are taking an unusual Hearts debut in stride.

"We made our goal, honestly, to have fun and make good shots," Armstrong said. "We want to work well together at our first Scotties and enjoy the experience."

The top four teams in each pool of nine advance to the championship round starting Friday and carry their records with them.

The top three from the championship round will be Sunday's playoff teams, with the No. 1 seed earning a bye to the final.

After losing to six-time champion Jennifer Jones of Manitoba in their first ever game at the Hearts, Quebec strung together three straight wins.

"We're just having fun and we're living in the moment," Armstrong said. "We're just breathing between every shot and just working as a team."

Manitoba was 2-2, while Saskatchewan pulled even with Newfoundland and Labrador's Sarah Hill at 2-1.

"To come out after three games two and one, I'm OK with that," said Anderson.

Birt recovered from giving up a steal of two in the 10th to St-Georges the previous evening to down Newfoundland's Hill 12-8.

"We regrouped after last night," Birt said. "It's a heartbreaking moment when you lose a game that way, but you also learn so many things from it."

B.C.'s Corryn Brown collected her first win of the tournament beating Nunavut's Lori Eddy 11-2 to get to 1-2. New Brunswick's Melissa Adams and Nunavut were winless in Pool B.