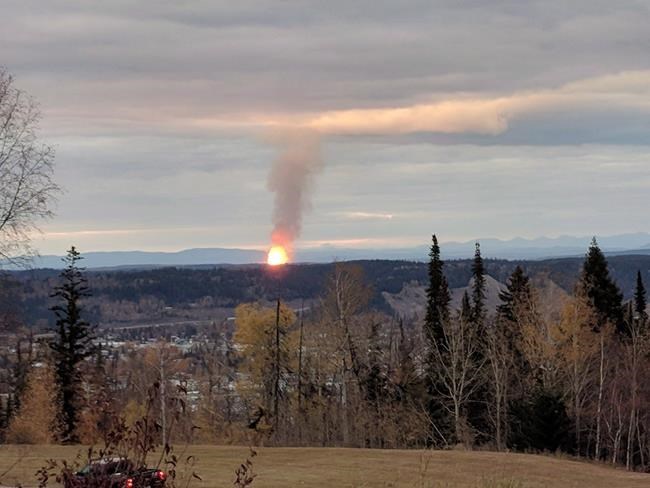 CALGARY — A delayed inspection and a failure to predict how fast cracks could develop from corrosion are cited in a report describing the cause of an explosion and fire in an Enbridge Inc. natural gas pipeline northeast of Prince George, B.C., in October 2018.

No one was injured in the incident but 125 people in a two-kilometre radius were evacuated as a precaution and the outage in the almost 50-year-old pipeline led to natural gas shortages throughout British Columbia.

In its final report released Wednesday, the Transportation Safety Board of Canada says the 90-centimetre (36-inch) pipeline — part of the T-South gas system that supplies much of southern B.C. — ruptured due to stress corrosion cracks on the outside surface of the pipe.

It said polyethylene tape coating applied to the pipe to protect it from corrosion deteriorated over time, allowing soil moisture to come into contact with the pipe surface and leading to corrosion and cracking.

"The pipeline operator had a stress corrosion cracking hazard management plan in place for this pipeline," the report says.

"The model used to predict crack growth did not take into account all potential uncertainties in the predicted crack growth ... Additionally, an inspection of this pipeline segment scheduled for 2017 was deferred until the fall of 2018. As such, the existing cracks remained undetected."

The report doesn't offer new recommendations because the problems related to the polyethylene tape widely used in construction in the 1960s and 1970s are well known and have been addressed by the industry and regulators, said TSC lead investigator Jennifer Philopoulos in an interview.

"Already today there's been action taken on the part of the company and the regulator to ensure that they've addressed some of the issues associated with the failure of this pipeline," she said.

In the case of the Westcoast pipeline, the company didn't follow its own procedures in technical assessment and approvals before deciding to defer the inspection that may have identified the cracks, she added.

The TSB says cracking due to tape deterioration was also to blame for three other similar pipeline failures since 2002, all in TransCanada Corp. (now TC Energy Corp.) pipelines, near Beardmore, Ont. in 2011, at Swastika, Ont., in 2009 and at Brookdale, Man., in 2002.

The tape isn't used in new pipeline construction but remains in place on many older pipelines in Canada, Philopoulos said.

"We know this incident has caused concern and disrupted the lives of so many people in the area and we really apologize for that," said Michele Harradence, Enbridge chief operations officer for gas transmission and midstream, in an interview.

"We absolutely commit we've learned from this incident and taken steps to ensure the safety of our natural gas system. And we took those steps right away, as soon as we were able to get into the area to see what happened."

Enbridge says it has completed enhanced pipeline inspections on its natural gas pipeline system in B.C. to prevent similar incidents from occurring.

Philopoulos said the purpose of the report is to identify the cause of the incident, not assign blame.

The evacuation involved many residents of the Lheidli T'enneh First Nation, whose members live nearest the blast site, and the community announced last year it would pursue a lawsuit demanding Enbridge remove its pipelines.

A lawyer for the nation, Malcolm Macpherson, said residents feel that the TSB report backs up their contention that the pipelines aren't safe, and that the lawsuit would proceed.

This report by The Canadian Press was first published March 4, 2020.

Police hand out tickets to dozens leaving anti-lockdown protest in Alberta
May 8, 2021 5:49 PM

Canada's Einarson eliminated at curling worlds after 8-3 loss to Sweden's Hasselborg
May 8, 2021 5:31 PM