Council received over 30 letters regarding the bridges on trail system
Sep 10, 2020 4:00 PM By: Heather Stocking 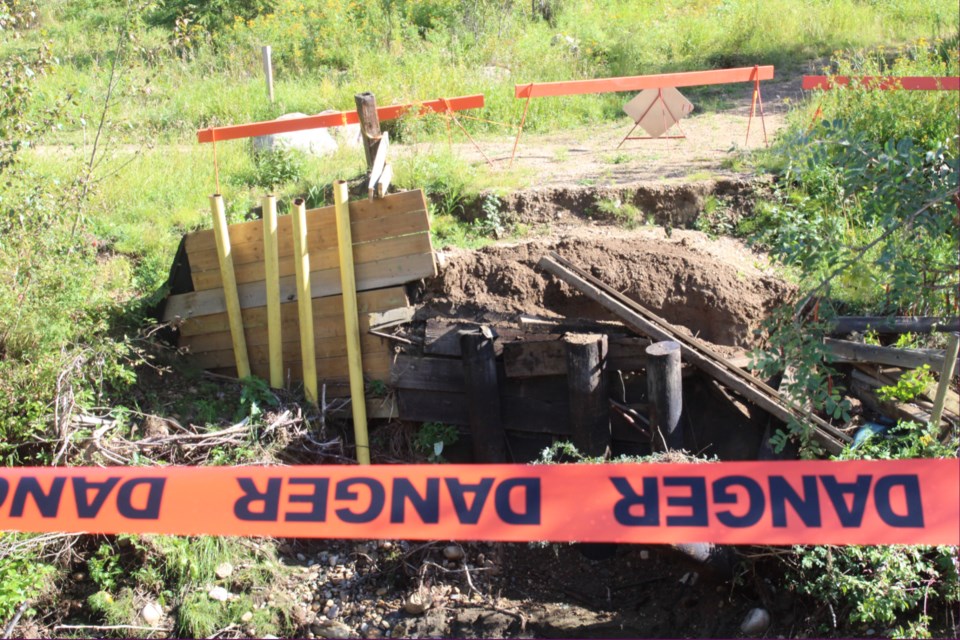 Town of Athabasca outdoor services staff completed removing the north bridge on the Muskeg Creek Trails Sept. 4 after it became unsafe to use. Heather Stocking/AA

ATHABASCA — Mayor Colleen Powell asked the representatives from the growing Friends of the Muskeg Creek Trails group on Facebook to not make a presentation to council, asking instead for permission to form an ad hoc group with them.

At the Sept. 1 council meeting Powell asked council to form a small committee to meet with four members of the group so both sides can hear concerns and hopefully come up with ideas to replace the old bridges and keep the trails viable in the future.

"Regarding Muskeg Creek Trail, there are over 400 people belonging to this (Facebook) group so, they're not something that we can (wave off). And I would like to form an ad hoc committee with three of us to meet with this group who are thinking of becoming a society,” Powell said. “I think there's a lot of potential there for them to help us manage that area and become a society to help raise funds to do things there.”

Coun. John Traynor noted that 33 letters have been received by council and is concerned that people do not realize how much council cares about the trail system.

“Is there any way that we could relay that message to them because I feel like the amount of letters and so forth and the chatter that's on their Facebook page makes our council look like we don't care about this which is absolutely not true. I think everyone in this community knows how much we care about those trails,” Traynor said.

Coun. Tannia Cherniwchan was one of the founding people who developed the trails starting with the 1 kilometre loop with the assistance of town employees who cleared the first loop and Landing Trail Intermediate School staff and students who cleared more trails.

"We will be glad to sit down with them and share the ideas of everything that has been done. I personally feel it's wonderful having read through all the letters that we received, but it needs careful consideration; we absolutely need their assistance to keep this going,” Cherniwchan said.

Coun. Dave Pacholok would like to see Athabasca University involved in the discussion as part of the trail system is on AU land adding he feels the people in the Facebook group do not understand the fiscal constraints the town is under.

“I only saw one letter suggesting they would be interested in helping fundraise for this project, everybody else basically put the onus on the town. So, there's my one of my issues,” Pacholock said. “Secondly, the fact that it's on university land and a lot of people saying ‘I work with university and I use it at lunchtime’ I think some of the onus goes on to the university to alleviate this issue. We can do it when we have the money and at this time, it's certainly not available.”

“But that's not stopping a lot of people here from getting together and putting their initiative together to fundraise and so I agree with these two, that certainly the onus is on us to help but it's certainly not on us to solve this problem.”

Facebook group creator Geoff Loken said the four members on their side are looking forward to sitting down with representatives from council on the ad hoc committee.

"We're eager to hear their perspective and to learn more about their decision-making process to date. We’re hoping to meet (Sept. 8),” Loken said.

Charges laid in Boyle woman's death
Sep 15, 2020 4:04 PM
Comments
We welcome your feedback and encourage you to share your thoughts. We ask that you be respectful of others and their points of view, refrain from personal attacks and stay on topic. To learn about our commenting policies and how we moderate, please read our Community Guidelines.