Athabasca University is not pulling up stakes and leaving town, according to AU president Dr. Neil Fassina . In a wide-ranging Oct. 3 interview Fassina expressed frustration over continually allaying fears of AU leaving the region.
Oct 7, 2019 3:55 AM By: Heather Stocking 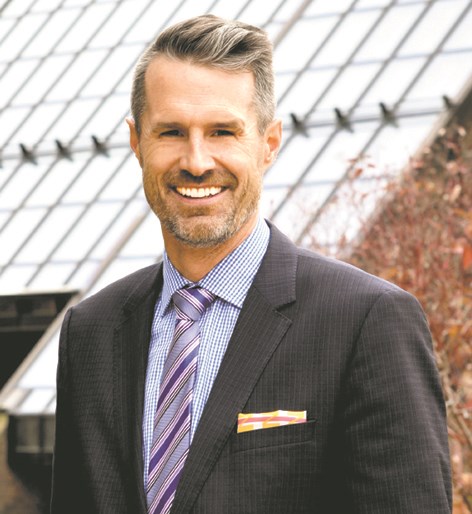 Dr. Neil Fassina speaks on AUs unique physical and virtual location and how he keeps striving to improve the university.

Athabasca University is not pulling up stakes and leaving town, according to AU president Dr. Neil Fassina.

“Do we have a commitment to that in the region? Yes,” he said. “But I can't do it on a job-by-job basis. If I'm doing it on a singular experience, one at a time, it takes away from the opportunity to create the strategy that we're trying to achieve that is going to elevate the entire system.”

In fact, Fassina went all the way back to 1984 to prove that not all AU employees lived in the region.

“Now the legend I'm going to dispel,” he continued. “The legend is, in 1984, the entire university moved up to Athabasca, and that's not true.”

“In 1984, we had 184 team members move up here, and then the university was much smaller than it is, Fassina explained. “We (now) have 328 that reside in the county, not necessarily in the town, the town and the county tend to blur a little bit. So, we have grown,” he continued.

“The challenge is there is a perspective that when you see an individual or executive or a role that leaves it doesn't mean that (AU is) leaving,” Fassina said. “It means that we're seeking to create the talent.”

“Today, we are a semi virtual organization; 54% of our team members work from home. So, we're just shy of about 1200 team members, but a third of them live in the community of Athabasca. The goal here is to grow, and the commitment is to do that,” Fassina clarified.

Fassina continued, explaining why some staff are do not reside near the University, ”It’s recognizing that individuals will have needs that we seek to try and accommodate. We give preference to individuals who are living in or willing to relocate to the community, all else being equal.”

Fassina returned to the relationship AU has with the region, speaking of the symbiosis enjoyed between the university and the Athabasca area.

“Athabasca University injects just over $20 million a year in salary and benefits as an employer into the community,” he explained. “You go one step beyond that, we buy locally as much as we can. So, all told, we inject about $30 million into the local community every year.”

"We are willing partner in fostering, whether it be the social or the cultural fabric of the community itself,” Fassina continued. “It's about participating in the different events, being a part of Rotary conversations, being part of the tourism and economic development committee. It's being present.”

“How do we bring thought leaders together as a university, which is something that we can do to spark conversations around economic development? Once we kickstart some of those conversations, then we can take an active role in helping to build them,” he said.

While Fassina is adamant AU is not going anywhere, he did say the university is facing challenges.

“We tend to experience pressures before your traditional sticks and bricks universities experience it. So, as an example, our learners tend to tell us what their expectations are for learning technologies and integrated learning environments sooner because they're immersed in them full time,” Fassina continued. “We tend to get the signals early that says, ‘We'd really like to see this kind of change or that kind of change.’”

“With a handful of partners around the world, we're building the future of higher education globally, where we can effectively and efficiently deliver the highest quality learning in a way that is meeting the needs of a very different learner today than it was 50 years ago,” he explained.

Promoting a digital university to people who still think of online learning as something from the future is a challenge for AU Fassina said.

“While we buy into the concept of inventing the university of the future, not necessarily everyone understands what the future might look like, so we end up having to have conversations to bring people along for the journey, whether they be members the broader public, or elected officials, just to be able to share in the vision of what we're trying to achieve.,” Fassina expanded.

“What we're creating is doesn't look normal, and but it has never looked normal,” he said. “The big challenges are how do we create this future, and bring people along for that journey with us?”

How do you change public perception? Control the narrative.

“We started telling our own story, and that story was one of pride. We are Canada’s only open university; we are Canada's only digital first university. That's something to be proud of.” Fassina stated.

Watch for more of our interview with Dr. Fassina in future issues of the Athabasca Advocate.