Business as usual following first big snowfall of the year 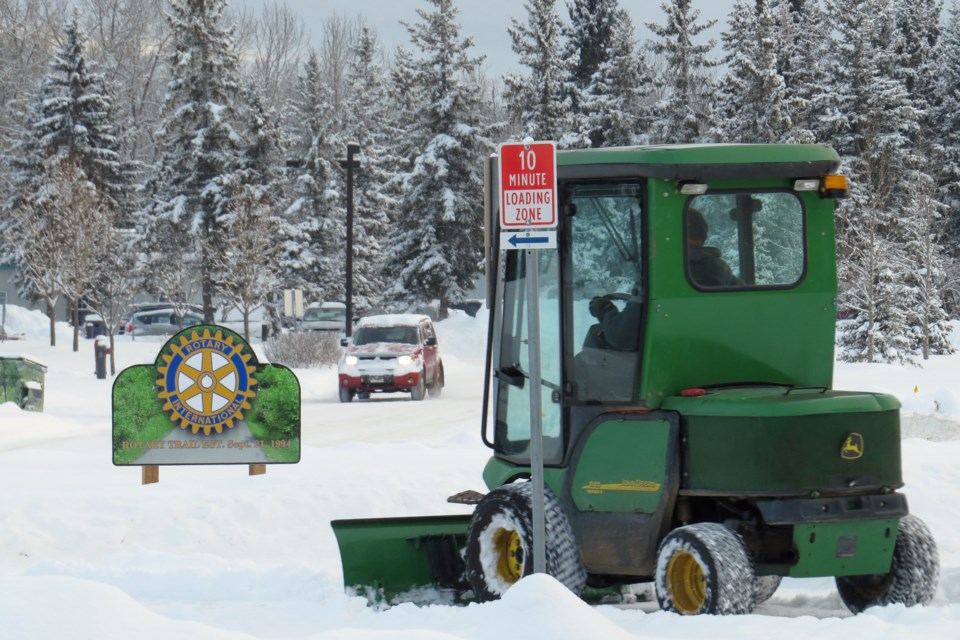 A snowplow clears the walkways at the Athabasca Regional Multiplex Jan. 22 after a 10-centimetre dump of snow across the area. A snowfall warning was in place until about 3 p.m. that day. Bryan Taylor/AA

ATHABASCA - Snow plows were busy throughout the Town & Country region Jan. 22, with a morning snowfall dumping up to 10 centimetres by 8 a.m. alone, while an Environment Canada snowfall warning remained until 3 p.m. that day.

But despite the snowfall, services like school buses and taxis continued to mostly run smoothly.

“We had some delays out in the rural areas, but there were none within the Towns of Westlock and Barrhead,” Cooper said. “Things went really well, unlike last week where all busses were cancelled (Jan. 14-15), and just 20-25 of our 66 bus routes ran (Jan. 16) due to the cold weather.”

Tracey Angell owns Tracy’s Taxi in Westlock and said the company continued to take calls during the day.

“We were doing some outside service in the country where we had a few problems,” owner Tracy Angell said. “We drive minivans at our company, and the minute you drive into something about six inches deep you’re in trouble.”

She said all you really had to do was travel the conditions of the road.

“When driving to Edmonton, it’s 70 kilometres (per hour) all the way in,” Angell continued. “When you travel you always try to stay safe, and if it’s not good enough to go, you have to cancel the trip. You’re not going to put anyone in jeopardy.”

She added at least it wasn’t as bad as the previous week.

“It was cold and ugly out there, but welcome to Alberta,” Angell said. “It’s weather like this that most Albertans prefer trucks with four-wheel drive.”

Don Powell from Colinton Cabs in Athabasca said driving during the snowfall hardly affected him at all.

“That actually wasn’t too bad. There wasn’t any really problems,” Powell said. “We had a higher uptick of business during the cold spell we had last week than we did with the snowfall (Jan. 22). But overall, it wasn’t too bad. Everything ran smoothly.”

In Athabasca County, communications co-ordinator Karl Kopan said when it comes to servicing their roads, they always work on the main arteries of traffic first.

“We then work our way down from there,” Kopan added. “But all our equipment continued to run, unlike during the cold snap the previous week. Some of the outdoor work had to be scaled back during that time.”

He added the county were not the only ones affected during the recent cold snap.

“I talked to somebody from the (Alberta-Pacific Forestry Industries Inc) the other day. He said most of their equipment was shut down as well,” Kopan said. “It’s a safety thing as well. When it’s that extremely cold, the safety of our staff is our upmost priority.”

Kopan added that the cold and the snowfall is something they expect every year.

“Thankfully when the extreme cold was here, we did not get the snow we had (Jan. 22),” he said. “That would have made things even more challenging for us. But as I said, we have snowfall like this every year. I’m just thankful we didn’t get hit like Newfoundland did.”