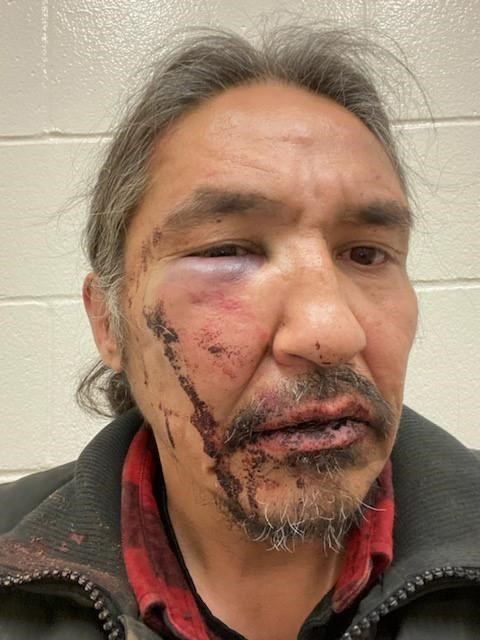 Athabasca Chipewayan Chief Allan Adam is shown in a handout photo provided by Adam. Alberta Justice dropped the charges against a prominent northern Alberta First Nations chief in a Fort McMurray courtroom this morning. The move comes after the RCMP dash-cam footage of his violent arrest was made public as part of a court application to stay criminal charges against Chief Adam of the Athabasca Chipewyan First Nation. THE CANADIAN PRESS/HO-Allan Adam

FORT MCMURRAY, Alta. — Charges have been dropped against a prominent northern Alberta First Nations chief whose stop for an expired licence plate turned into a violent arrest that left him bruised and bloodied earlier this year.

The case of Chief Allan Adam of the Athabasca Chipewyan First Nation was in front of a Fort McMurray provincial court judge Wednesday where charges of resisting arrest and assaulting an RCMP officer were withdrawn by the Crown.

"The Crown reassessed the prosecution standard based on an examination of the available evidence including the disclosure of additional relevant material and withdrew the two charges," Alberta Justice spokeswoman Carla Jones said in a statement.

"The Alberta Crown Prosecution Service has no comment on the actions of the police."

"I'm overwhelmed at the fact that the charges have been dropped because, you know, we knew — my wife and I knew — that we didn't do nothing wrong," he said on a video call after the hearing.

"You know, it was just for an expired licence plate. We don't understand the reasons why it had to escalate."

"The withdrawal of these charges at this stage in the law, for our purposes, is a finding of not guilty," Beresh said.

"It is a true victory, not only for Allan Adam and his family, other Indigenous accused, but for our society generally."

The move to drop the charges came after RCMP dash-cam footage of Adam's arrest was made public earlier this month as part of a court application to clear Adam's name.

The 12-minute video from early on March 10 shows a black truck idling outside the Boomtown Casino in downtown Fort McMurray in the glow of flashing police lights.

Adam can be seen walking back and forth between the truck and a RCMP cruiser, shouting profanities at an officer out of view. The chief tells the officer to tell his sergeant: "I'm tired of being harassed by the RCMP.'"

"Sir, just return to your vehicle. I'll come talk to you in a minute,'" the Mountie replies.

A few minutes later, after some arguing, Adam gets out of the truck's passenger seat and takes off his jacket as he strides toward the officer. A woman in the driver's seat gets out and Adam crouches as though bracing for a fight.

There is more arguing and Adam gets back into the passenger seat. The officer is seen pushing the woman against the truck and yanking her by the shoulder as she shouts "'Ow!"

"'Hey! Leave my wife alone! You come for me,'" Adam says, before swatting the officer's hands away from the woman.

About seven minutes into the video, a second officer runs at Adam, grabs him by the neck and shoulders, tackles him to the ground and punches him in the head. Adam is then cuffed and put in the back of the cruiser with the camera, blood streaming from his face.

The RCMP have said Adam's truck had expired plates. They initially stated that the officers' actions were reasonable.

Politicians, however, have demanded answers after the video was released.

"The role of the police is to investigate and gather evidence in support of a charge and the RCMP fulfilled that role on this file," spokesman Fraser Logan said in a statement.

"The Crown's role is to assess the elements of the offence and to determine if they prosecute. As we've heard today, the Crown has made the decision to withdraw the charges."

Speaking in Edmonton after the charges were dropped, Alberta Premier Jason Kenney said the Police Act is currently under review in the province and there will be a specific focus on racism and abuse of authority.

"I did express real concern and shock at the video that we all saw," Kenney said.

"We know like in any walk of life, there are some bad apples. And police services, especially because of the extraordinary powers that they exercise, must be particularly careful."

This report by The Canadian Press was first published on June 24, 2020

House fire quickly quelled in Athabasca
Jul 13, 2020 12:45 PM
Comments
We welcome your feedback and encourage you to share your thoughts. We ask that you be respectful of others and their points of view, refrain from personal attacks and stay on topic. To learn about our commenting policies and how we moderate, please read our Community Guidelines.