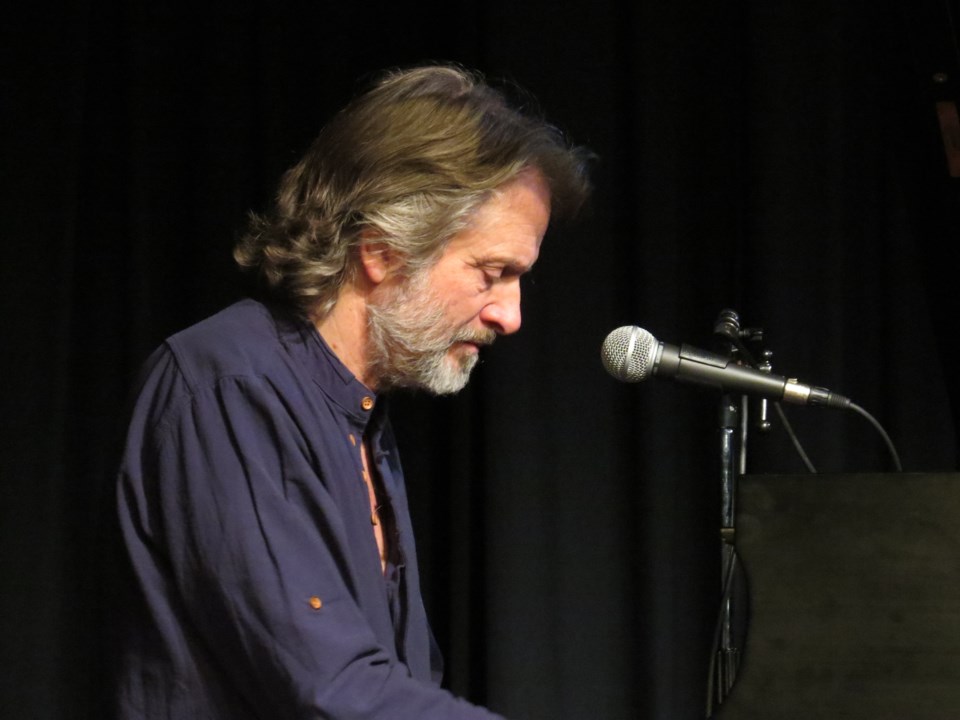 The performance marked Cooper’s third trip to Athabasca, with his previous two appearances as a member of the U.K.-based group Oysterband.

“(The Nancy Appleby Theatre) is a really great place to perform. It’s a nice theatre, and it’s a very well-run club with a great audience,” Cooper said. “It’s also an exotic location to come to in Athabasca. It’s a really great experience.”

Cooper said it’s very different performing by himself rather than with a band this time around.

“It’s kind of strange going into the same dressing room thinking that the last time I was here I was with a band. But now it’s just me,” he stated. “But like I said it’s a pleasure to come to this particular venue and play for the Heartwood Folk Club. It’s always a positive thing to do.”

Jackie Shank said it was a great concert to watch.

“I don’t come as often as I should, but I still enjoy it,” Shank said. “I think that Cooper’s really talented and the community’s really lucky to have Heartwood put together all the concerts.”

“He’s not afraid to use words like hanging or death, which most people detest,” she said. “He’s quite talented on the various instruments, including the piano, guitar, mandolin, harmonica and cello.”

Young Caroline Hall celebrated her sixth birthday the night of the concert. She said she really liked the show.

“I loved that all the instruments are electric,” Hall said. “I also liked the first song. It really sounded good.”

Jim Hurley drove in from south of Athabasca to watch the performance. He said he’s attended the Heartwood concerts for several years.

“I enjoyed all the different instruments that he played on stage. It’s quite unique what he does on stage," Hurley said. “I really enjoyed him playing the mandolin. I play a little bit of that myself, and that’s a nice kind of styling that he has with it.”

Cooper, who holds dual U.K./Swedish citizenship, has lived in Sweden since 2000. He said that just like the people in the Athabasca area, he’s experienced some really cold winters over the years.

“But for the last six years due to climate warming, we have had very warm winters,” he explained. “But I like skiing in the snow and skating on the lakes.”

He also took the time to express his opinion about the U.K. formally leaving the European Union Jan. 31.

“I still want to be a citizen of the E.U., and Sweden is my home now,” Cooper said. “I continue to hope somebody comes along to save the U.K. from its own recent stupidity.”

Cooper is on his first solo tour Western Canada, The “King Winter” Tour, that began with a house concert Jan. 19 in Castle Rock, British Columbia and finishes Feb. 8 after eight consecutive nights of house concerts from Cochrane to Okotoks.

The next concert is set to take place March 12, with a performance from traditional Irish folk group Dervish.

“It will be their first time here, and we can expect some emotional and rocking Irish music during this performance,” Heartwood artistic director Peter Opryshko said.

According to Dervish’s website, they’ve been performing their music around the world for the past 25 years and have been described by the BBC as “an icon of Irish music.” The groups also have been on the same bill as well-known artists such as James Brown, Neil Young, Sting and Iron Maiden.

Tickets for this show are available for purchase by checking out the Heartwood Folk Club’s website at http://heartwoodfolkclub.org/, or by stopping by either the Athabasca Value Drug Mart or Whispering Hills Fuels.

Region’s fire departments run through STARS landing exercise
Feb 19, 2020 12:06 PM
Comments
We welcome your feedback and encourage you to share your thoughts on this story. We ask that you be respectful of others and their points of view, refrain from personal attacks and stay on topic. To learn about our commenting policies and how we moderate, please read our Community Guidelines.