Closed for the Holidays wows audience at Nancy Appleby Theatre 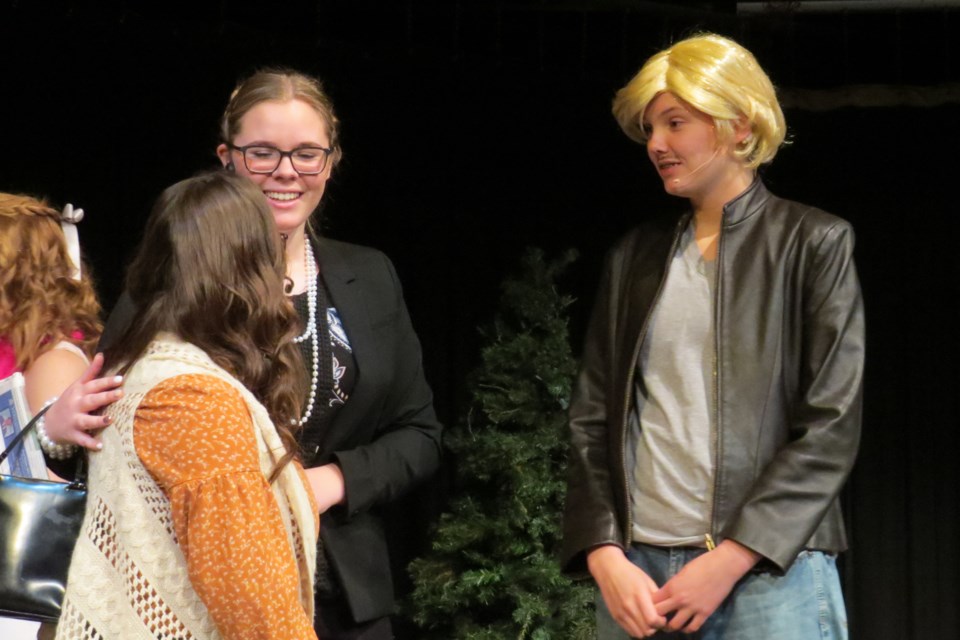 Rifka (Karley Bilsky, centre) tries to convince Shelby (Bryanna McLeod, left)) to get together with Dr. Kieth (Klara Jordy) during the play Closed for the Holidays put on by students at Edwin Parr Composite School in Athabasca during their second showing at the Nancy Appleby Theatre Nov. 26. The play is about a motley crew of travelers who find themselves stranded at a local community centre Christmas Eve during a blizzard. Bryan Taylor/AA

ATHABASCA - Spectators converged on the Nancy Appleby Theatre Nov. 25-27 to take in the play Closed for the Holidays performed by students from Edwin Parr Composite School’s Performing Arts Class.

This holiday comedy was written by Flip Kobler and Cindy Marcus, and tells the story about how a motley crew of travelers, including a busload of students and a quarrelsome couple on their way to their wedding, find themselves stranded at a local community centre after a blizzard shuts down the roads two days before Christmas.

Performing arts teacher Brittany Miller served as the play’s director and said it was a lot of work to put on from start to finish.

“From the start of the year we had scheduled class time to help us prepare for the play. Starting earlier this month, we practiced every day at the theatre itself,” Miller continued. “Each of the shows saw large crowds fill the seats, and our success can be attributed to all the (students) we had on stage.”

For the EPC production, some of the genders of the characters were switched around. The role of the mime character Nancy was changed to Nathan, while Bean, normally a male character, was a female for the production.

Grade 10 student Peyton Alix portrayed the neurotic and superstitious R.J., a character who believed that he was cursed to have bad Christmases every year.

“It took a lot of voice work to play this character,” Alix said. “But after four months of planning and practicing, I started to get the hang of it.”

He added that he planned to continue to perform with the school’s drama club in the near future.

“I was the only character who actually got to kiss a girl on stage,” Alix said. “How lucky is that?”

Classmate Chester Pangilinan, who played the overeager Sheriff, said it was his first time ever performing in a play.

“I really loved it,” Pangilinan said. “I have no plans to become a cop once I graduate high school, but I don’t mind playing one on stage. I also hope to be part of the program once again next year.”

Grade 11 student Emily Marshall was also a first-time performer and loved every minute of it.

“I played the character Bean during the production,” she said. “I would 100 per cent be part of a play again in the future. I found it really fun being part of the preparations to put it together. It took lots of improvisation on stage to make it the success it was.”

Andrea Bickerstaff brought her three children with her to watch the show during the play’s second showing Nov. 26.

“We’re here to support the community,” Bickerstaff said. “My daughter had a friend performing in the play named Klara Jordy, who played the character Dr. Kieth. The kids also loved Nathan the mime. He was really entertaining and says a lot with his sign language.”

Miller said she was really proud to see how all the actors grew and flourished as they practiced for the production.

“Many did not even want to be performers when they first started,” she explained. “But as they got used to it, they were just amazing. For next year, we are hoping to perform a musical as our production.”

Miller added that this spring they will be performing an act in a festival competition in Lac La Biche.

One more COVID case in Athabasca County
Aug 6, 2020 4:26 PM
Comments
We welcome your feedback and encourage you to share your thoughts. We ask that you be respectful of others and their points of view, refrain from personal attacks and stay on topic. To learn about our commenting policies and how we moderate, please read our Community Guidelines.