An MD of Opportunity community meeting in Calling Lake took a half-hour long turn to Alberta-Pacific Forest Industries and forestry around the region, as residents took the conversation to herbicides and clear-cut trees.
Dec 12, 2018 12:00 AM By: Town And Country Today Staff 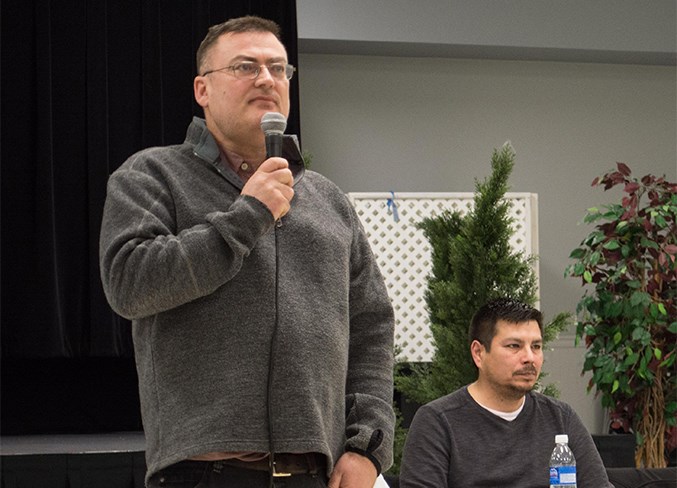 An MD of Opportunity community meeting in Calling Lake took a half-hour long turn to Alberta-Pacific Forest Industries and forestry around the region, as residents took the conversation to herbicides and clear-cut trees.

About 50 people gathered in Calling Lake Dec. 4 to discuss operations, housing, forestry and economic sustainability at the public meeting. Held at the the Calling Lake Community Complex, councillors and staff from the Municipal District of Opportunity attended along with representatives from Alberta Agriculture and Forestry.

During the meeting, MD chief administrative officer William Kostiw said the MD would be working with the forestry department and making a better effort to work with them on industry and related jobs in the area.

“All the timber leaves the municipality — we don’t get a nickel for any of the lumber,” he said. “I kind of feel guilty. When I was in Athabasca, we worked very hard to get Al-Pac over there. We probably should have had Al-Pac up here some place.”

He said the MD is trying to restructure and regroup with respect to the industry, and his job is to help council move forward.

“We’ll also be looking at getting some smaller industries back in the community,” he said. “When (we) were young, we had three sawmills right in town here. But they’re all gone. Those are the kind of jobs we need.”

Owned by the Hokuetsu Corporation since October 2015, Al-Pac’s facilities are located in Athabasca County northwest of Grassland. According to Alberta Agriculture and Forestry, the company holds the largest forest management agreement in the province at about 58,120 square kilometres. According to data from the province, almost the entire MD of Opportunity is under Al-Pac's forest management agreement.

Representatives from Alberta Agriculture and Forestry spoke at the meeting, as well.

Provincial silviculture specialist Andrew Shandro brought up herbicide use in the province. He pointed out that the province still allows its use and specifically mentioned glyphosate, which is also sold by Monsanto as Roundup.

Monsanto — purchased by Bayer this past year — lost a lawsuit in the United States related to the product and was ordered to pay US$289 million to a man dying of non-Hodgkin lymphoma. According to the Guardian newspaper, a jury decided the weedkiller caused the man’s cancer and the corporation failed to warn him of the health hazards from exposure.

In addition to glyphosate, Shandro said the province allows the use of triclopyr, which is also sold as Garlon and Remedy, and imazapyr, which is sold as Arsenal.

“The decision to use herbicide is a company’s decision,” Shandro said. “So the province has said that herbicide is an appropriate tool to use in forest management, but forest companies are required to justify the use and have a prescription made up.”

He said companies generally use herbicides to help conifer forests grow, keeping competitive plants out. He added companies are required to submit a herbicide proposal, and a part of that proposal is a public and Indigenous consultation process.

Anyone can present their issues, he noted, which could include something like proposed herbicide use on a place someone visited through their childhood.

He added companies are also not allowed to spray near water courses, and there are rules around nesting season, as well.

Calling Lake resident Danny Cardinal pointed out the whole world is connected by water and asked how Shandro could say spraying up north would not impact Calling Lake.

“You can spray along the Athabasca River because you’re not polluting yourself. You’re polluting everybody up north. All water is connected,” he said.

“Industries and the government — the impact that they have on the land, affects the biodiversity right from the start,” Cardinal added. “We eat those animals. We eat those birds … We are the ones that are going to be getting sick in the end.”

Kostiw also said he had immediate family members who died after handling a grain chemical.

“That’s why I’m here tonight. I sold out a business; I hadn’t bought the family farm to try and stop some of that,” he said, noting that he serves on agricultural and community boards to stop some of the uses of herbicides and pesticides.

“Is it possible for Calling Lake to say they don’t want the pesticides?” asked an audience member. “And then forestry, any application or MD — any application that comes in this area has more scrutiny, if that’s the case?”

Kostiw answered that residents could certainly voice their opinions and work with the provincial departments of forestry and environment.

He again pointed out he and other members of the MD had just that day met with officials from Alberta Agriculture and Forestry as well as Alberta Environment and Parks. He said it “all comes together.”

“We get no benefit to our community to any of us, through the logging, and yet they’re spraying ... it, and using our roads, so I think there’s got to be some kind of a better deal made with the province,” he said. “We’re going to keep up at the high level, and make sure that we get our voices heard.”

Members of the audience noted that in some cases, it was too late to do anything about harvesting trees. They noted that there were fewer moose in the area as there was no cover due to clear-cut forests.

Danny Cardinal said many studies have been done over the years, but he believes studies missed certain areas that are sacred to the community and groups of people with that knowledge.

“Maybe for these type of areas, medicinal areas, areas of significance where we pick herbs, maybe there should be somebody there — maybe MD — with the land that can make these notations,” he said. “You guys have more access to the ministry that we do. We are just people and we can’t get anywhere.”

Coun. Victor Gladue said he had been in communication with the provincial government with respect to this.

Kostiw said he believes that the community needs to hold Al-Pac accountable, and that starts with the province and the premier.

“The deal with Al-Pac back in the 1980s when we first started — they would support the local mills; well, they’re all gone. They would support local employment; that’s all gone,” Kostiw said.