Grades 7-12 could be cut from Grassland Community School 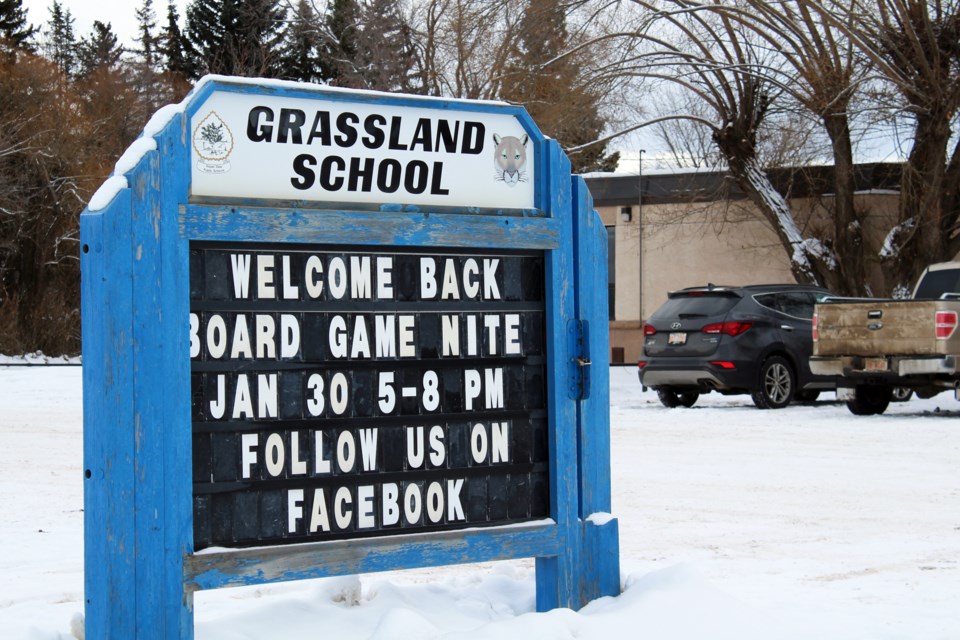 Grassland residents will learn the fate of the Grassland Community School at a special Board of Trustees meeting April 8 in Athabasca. A Notice of Motion to shut down Grades 7-12 was made at the board’s regular meeting Feb. 6 after a viability study conducted by Edmonton Public Schools recommended the school’s complete closure. Bryan Taylor

The results of the study were revealed at the Aspen View School Division’s board meeting Feb. 6, where EPS recommended the formal closure of the 62-year-old facility and to have the students transported to Boyle School.

Trustees directed administration to conduct the study at their Nov. 7 meeting, who then contracted EPS Nov. 15 to get the job done.

“On Dec. 2, (EPS) observed the day-to-day programming and operations at Grassland School to assess the overall condition of the building. Facility data from Alberta Infrastructure was collected and analyzed the economics of the entire region,” Supt. Neil O’Shea said.

The board was presented the study at their Jan. 16 meeting during an in-camera session.

O’Shea also reported secretary treasurer Amber Oko, Board Chair Candy Nikipelo and himself met with Grassland School to share the recommendations of the study. At the Feb. 6 meeting, the board passed a motion made by trustee April Bauer to make the report public.

“Five-year historical enrolments were used to create 10-year enrolment projections up to the 2019-20 school year,” he continued. “These projections indicated a steady enrolment over the next decade of between 60-67 students, and it also gave a further breakdown of grade levels.”

He added the report indicated that Grassland School has the capacity of up to 250 spaces, of which only 24 per cent is currently being filled.

“Boyle School is the nearest school other than Grassland, and they have the capacity of 540 student spaces, and their current enrolment is calculated at about 50 per cent,” O’Shea said. “The school has sufficient space to accommodate students from Grassland and is able to offer a wider variety of educational and extracurricular programming due to its larger population.”

Despite the recommendation, O’Shea said that the division knows that the school is an important fixture in the community.

“It provides a hub for the community and surrounding areas,” he added. “But the historical trend of declining enrolment makes it an increasing challenge to provide diverse programming to meet the needs and the course selection for junior and senior high students.”

“As of Sept. 30, enrolment at the school was 61 students. Of that number, two reside in the Athabasca attendance area and travel into Grassland,” O’Shea continued. “Approximately 35 students who live in the area who don’t attend the school, including 16 who attend other Aspen View schools, 13 attend school outside of our division while about six are home-schooled.”

He said the low enrolment has resulted in a low staff complement.

“At every level, we have multi-grades, and, in most cases, there are subject levels that are multi-graded,” O’Shea stated. “There’s the need for virtual delivery, timetables are restricted and there’s are limited elective course options such as for (Career and Technology Studies). It also limits the availability for extracurricular activities.”

O’Shea also took the time to commend the staff at Grassland School for their hard work to offer excellent programming for the 61 students despite the barriers in place.

“The community is extremely supportive of the school, works very well with the teaching and support staff and really makes things run well,” he said. “They do everything they can possibly do with the limited resources that they have.”

Keeping everything in mind, O’Shea said there are other options the board could consider.

“The first option of course would be the full closure. The second option would be the status quo, that being to leave it as a K-12 school and see where the future takes us,” he explained. “There could also be a closure of Grades 10-12, or we could look at a closure of Grades 7-12. Those recommendations are due to the natural break in the school systems as it currently stands.”

After some discussion, Trustee Tom Mykytiuk made a Notice of Motion for the special meeting Apr. 8 to shut down Grades 7-12 at the school and run it as a K-6 facility.

Trustee Anne Karczmarczyk then moved to have the April 8 special meeting, while Bauer made a motion to hold a public community meeting at Grassland School March 11. Both motions passed unanimously.

“According to Policy 15, which deals with school closures, there are a number of processes we have to consider,” O’Shea said. “We have to inform all of our parents by letter, we have to talk to affected community groups, and we have to gather feedback from parents at the public meeting.”

Nikipelo, whose ward includes Grassland and Boyle, said she encourages as many parents as possible to attend the community meeting.

"It gives them a change to communicate back to us what their feels, wants and needs are and what they are hopeful about," she said. "It's extremely hard to come up with a solution that will be totally positive for everybody. We value our smaller rural communities, and sustainability is a number one priority for us. We look forward to gaining specific information for individual families as to what their programming needs are and what their plans for the future are."

The board also passed a motion made by Bauer to direct administration to follow all the actions listed to fulfill Policy 15.

Just a man and his mules
Feb 15, 2020 7:08 AM
Comments
We welcome your feedback and encourage you to share your thoughts on this story. We ask that you be respectful of others and their points of view, refrain from personal attacks and stay on topic. To learn about our commenting policies and how we moderate, please read our Community Guidelines.