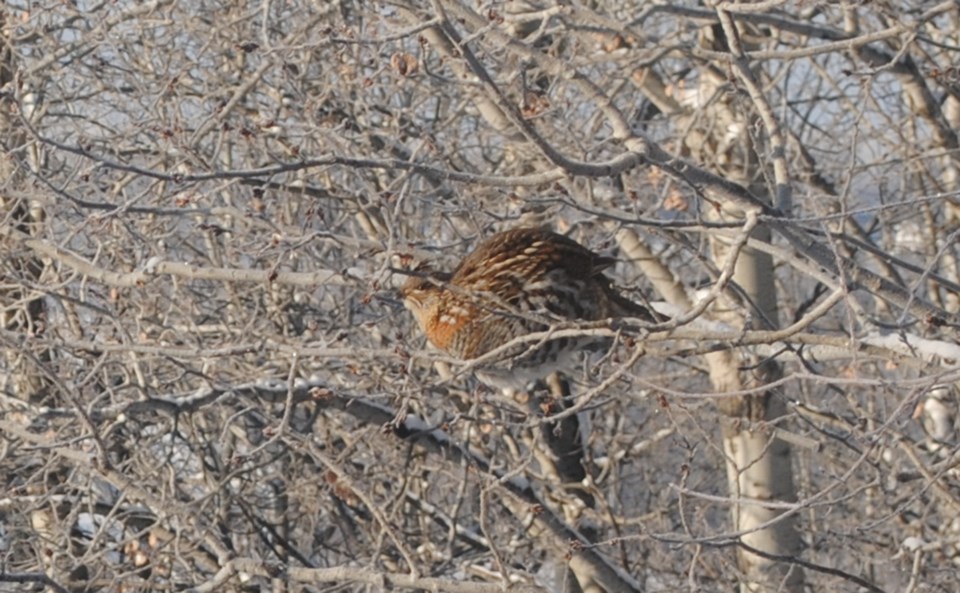 This ruffed grouse was one of the birds seen by observers during the 26th annual Athabasca Christmas Birdcount Dec. 24-30. The event was sponsored by Science Outreach – Athabasca and Crooked Creek Conservancy. Photo courtesy Wayne Brehaut

The volunteers, about half of what they normally expect, spent about 80 hours in the field observing and counting the boreal birds that reside across the region.

The draft results show 32 different species identified and a total of 1,283 birds — the number of species climbed by three from last year, while the number of birds declined from 1,747 in 2018.

Local environmentalist and event organizer Harvey Scott said in a Jan. 1 e-mail some of the results were provided by 34 observers with bird feeders at their properties.

“(Each observer) throughout the greater Athabasca region identified bird species and counted the number of each at their feeders and yards during the day,” Scott said. “Backyard feeders provide good, abundant, free food for winter birds and is often a welcome alternative to birds having to forage in the bush with the hazards there.”

Scott added since they first began the annual birdcount in 1994 they've been fortunate  to have a strong core group of people to keep track of the avian population.

“Our field teams have been strong with the experts mentoring newcomers and providing both knowledge and enthusiasm,” Scott said.

But for this year, they were short staffed in the field.

“We had members who were unable to participate because of work, illnesses, travel, and family commitments,” Scott continued. “As with many volunteer organizations we are getting older and need to replace ourselves with bright young new keen naturalists and invite citizens young and old to join us next year.”

“A shortage of quadrant counters caused teams, who had to cover two quadrants, to do more driving and less stopping and walking than usual,” Brehaut added. “It resulted in smaller counts than usual for some species, such as black-capped chickadees and redpolls.”

Another of the volunteer counters, biologist Deirdre Griffiths, used to study birds from 1970 until 1999 in the Elk Island and Cooking Lake areas east of Edmonton.

“In comparing years here, and the Athabasca data from 2018, one significant local factor is the number of field participants and the distance covered, both significantly reduced in 2019,” Griffiths said in another Jan. 1 e-mail. “Even though weather has been and was relatively mild, low wind, with only moderate snow accumulation so far. Much intensive research of Boreal bird species’ winter movements, even with advanced tracking technology, has not been done over large reaches of our vast Boreal region, and with town size and frequency declining northwards it becomes more complex to correlate count data over a one week period in December.”

She added that she knew of no accurate information regarding the impact that large wildfires can have on a Boreal bird species’ mating practice on any given year.

“(I can not say) how this affects population size until recovery during subsequent seasons,” Griffiths continued. “In a fire, adults can abandon nesting in the area and survive, but will unlikely attempt nesting elsewhere in suitable habitat that’s likely already occupied.”

Scott remarked that on Dec. 27 they went out at 11 a.m. rather than at the crack of dawn.

“This is realistically when the birds start to come alive,” he said. “For about 15 to 20 years, we also had a separate owl count. Unfortunately, the person who typically ran this count has since passed away and nobody else have taken up this responsibility.”

In order to attract some younger birders to come out next year they hope to pay a visit to some of the schools in the area to generate interest.

“There has been a hard core of us that have been here since the beginning, but some have already passed away and the rest of us are getting of an age where it could be our turn,” Scott added. “It is our hope that we recruit some new members in order to carry the Athabasca Christmas Birdcount on for many years to come.”

An Amazing Race coming to amazing Athabasca
Jan 15, 2020 3:29 PM
Comments
We welcome your feedback and encourage you to share your thoughts on this story. We ask that you be respectful of others and their points of view, refrain from personal attacks and stay on topic. To learn about our commenting policies and how we moderate, please read our Community Guidelines.