Meet Athabasca's new keeper of the past

Athabasca has found themselves a new overseer of the archives with the hiring of former Landing Trail Intermediate School teacher Gina Payzant on Aug. 3. “I’m extremely excited,” Payzant said.
Aug 26, 2016 12:00 AM By: Town And Country Today Staff 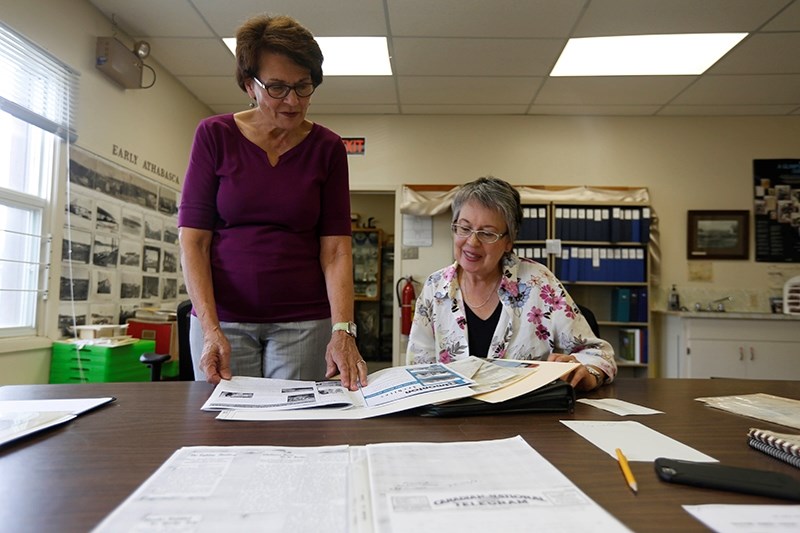 As Athabasca archivist Marilyn Mol (left) retires, Gina Payzant is getting ready to step into the position.

Athabasca has found themselves a new overseer of the archives with the hiring of former Landing Trail Intermediate School teacher Gina Payzant on Aug. 3.

“I’m extremely excited,” Payzant said. “I’m looking forward to serving the citizens of the Athabasca, and people from outside of the area, too. Scholars, historians, people looking for family information – I’m really interested in welcoming them into the archives.”

Payzant is no stranger to the historical information, having a master’s degree in Canadian history with a joint undergraduate degree in history and drama. Having written plays about Alberta’s history as well, for the past 19 years she has been working as a teacher at Vilna School and LTIS.

She will be replacing current archivist Marilyn Mol, who is retiring after having been in the position for 25 years. Although Payzant has some new potential ideas up her sleeve for the future, she said does not want to muddle or change what Mol has built up.

“I got some pretty amazing footsteps to follow,” she said. “Marilyn has done such a wonderful job, and my priority is to maintain and preserve what she has done and perpetuate programs. After I’ve learned my way around, I might develop youth programs, but my main goal is to preserve and perpetuate.”

With her first day set to be Aug. 25, Payzant has been doing some extensive studying for her new role. Over the past few weeks, she has been reading up on some books in archival policy and archival procedure to help her along the way. She said that even though she has worked in archives on various projects, this is the first time she is officially filling the archivist role.

“I got a lot to learn – I’m going to have a steep learning curve,” she said. “It’s a huge responsibility, and it’s going to take daily maintenance to keep it up. A lot of reading, and lot of accessing articles.”

Payzant has already been in communication with other archives throughout the province, including those in Lethbridge and Edmonton. She said that being in contact with other communities will help the Athabasca Archives to stay up-to-date with policies and other new ideas.

She also said the archives are already in-step with what other communities are doing because of Mol’s work, and she is keen on opening the lines of communication further across the country.

“I view the archives kind of like an island, and the job of the archivist is to build bridges,” she added.

“The first bridge is to the past, to help people find the information they need. And then the second bridge is the bridge to the future – how do we take that information and apply it, and turn it into knowledge.”

Mr. Turtle hits the streets
Aug 6, 2020 6:29 AM
Comments
We welcome your feedback and encourage you to share your thoughts. We ask that you be respectful of others and their points of view, refrain from personal attacks and stay on topic. To learn about our commenting policies and how we moderate, please read our Community Guidelines.