Every outage causes issues with the pool pumps
Sep 9, 2020 2:26 PM By: Heather Stocking 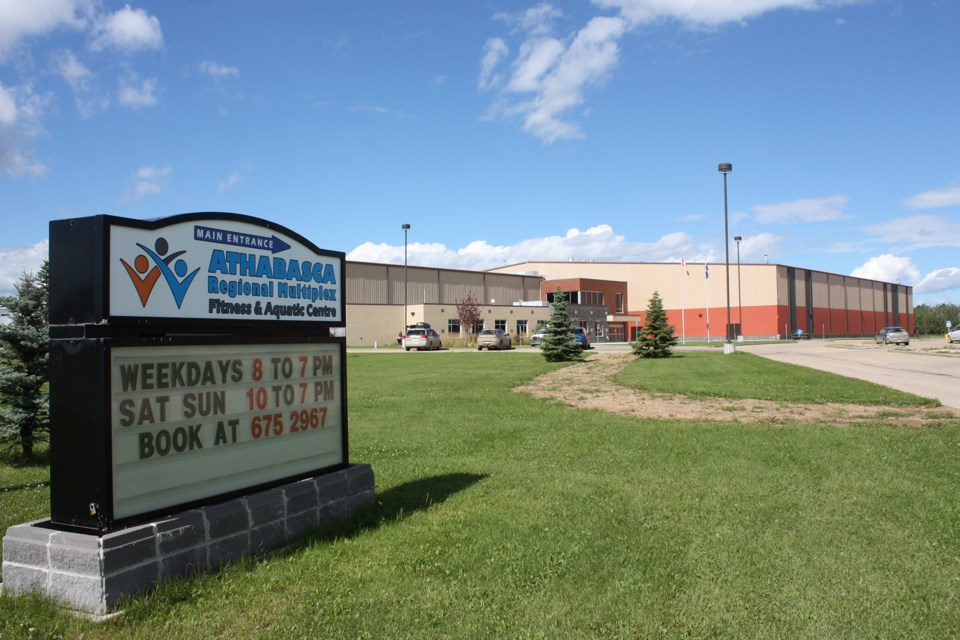 The Athabasca Regional Multiplex wants to get to the bottom of why they experience frequent power outages. File

ATHABASCA — Power outages are just an inconvenience most of the time, but every time the power goes out at the Athabasca Regional Multiplex, which is frequently, it causes the pumps to shut down and more grief than ever expected.

When power goes out at the Multiplex, the backup generator does not turn the pumps back on because of a seven-second delay. This is the situation that occurred Aug. 3-4 and led to the closure of the facility due to an accumulation of chlorine both from too much being added and an outage stopping the pumps.

“There seems to be too many power outages and I'm wondering whether the electrical system requires an upgrade or what the deal is there,” said Town of Athabasca Coun. Tannia Cherniwchan at the Athabasca Regional Multiplex Society (ARMS) meeting Aug. 24.

Town of Athabasca Coun. Rob Balay added, “I think the power outages are an issue with Fortis, because when it goes out at the Multiplex it goes out across the road at the university as well."

While it would stand to reason if power outages have hit the Multiplex and AU, they would also impact Edwin Parr Composite (EPC), Aspen View Public Schools is unaware of any problems according to communication officer Ross Hunter.

“We’re not aware of any issues with power outages at EPC,” Hunter said Sept. 1 in an email. “Mind you, there wasn’t much activity there prior to Aug. 20, but there’s no evidence that there’s been a problem.”

Balay said that ARMS did have Fortis check into it and were told the company would not assume responsibility, but that others in the know had told him that should not be the case.

“We've had this problem all along and we did have, several years ago, Fortis come in, and of course they won't assume responsibility,” Balay said. “But if you sort of behind the scenes talk to some of their operators, they will tell you that no, Fortis does have a problem and it's because they're just about overloaded.”

Every time the power goes out it causes problems at the Multiplex which could become more costly than having to close for two days like in early August.

“They don't want to up to upgrade the system; their lines are a lot of money and they don't want to do that yet and it's causing us this problem. So, I don't necessarily think we should just buy what Fortis is trying to sell us,” said Balay.

FortisAlberta however says the problem lies with the Multiplex, a spokesperson for the company said in an email Sept. 2.

“We have had a lot of wind and some lighting storms throughout the month of August. Unfortunately, this has caused sporadic outages throughout our Athabasca service territory. Specific to the rec centre, one of our powerline technicians (PLTs) has been in conversation with the maintenance technician on site at the Multiplex a couple times. All power quality checks have been completed on our end, and none of the outages have been linked back to FortisAlberta equipment,” the email said.

It went on to explain that the main breaker and switch gear in the Multiplex are the issue, not the power grid.

“We have determined that the outages in question have been linked direct to their facility main breaker and switch gear. We will continue to be in close contact with them in the case we can help with any issues specific to our distribution system.”

There was a suggestion at the ARMS meeting to install an uninterrupted power supply (UPS) to keep the pumps running during that seven-second delay until the backup generator could kick in, but the cost would be over $500,000, said facilities manager Rod MacGregor.

“You'd have a big bank of batteries that would take over your load, whatever load you put on there. So, as soon as the power goes out, the UPS system kicks in,” MacGregor said.

Athabasca County reeve Larry Armfelt made a motion to direct administration to work with AU and Fortis to try to find a solution to the problem.

“I just want the concept going forward that we would work in conjunction with them to overcome this issue,” Armfelt said.

Charges laid in Boyle woman's death
Sep 15, 2020 4:04 PM
Comments
We welcome your feedback and encourage you to share your thoughts. We ask that you be respectful of others and their points of view, refrain from personal attacks and stay on topic. To learn about our commenting policies and how we moderate, please read our Community Guidelines.