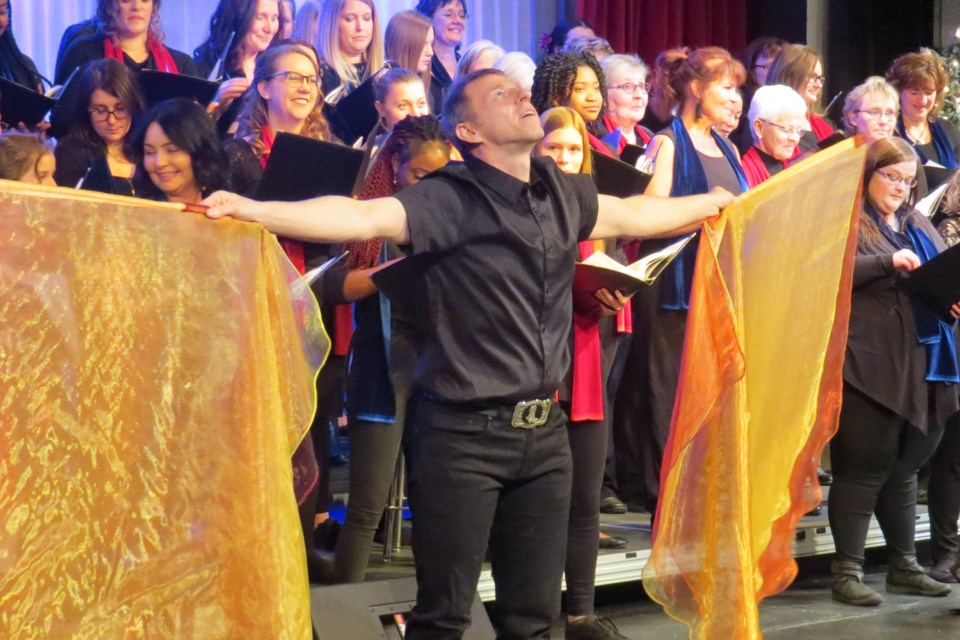 ATHABASCA – There was not an empty seat as the Northern Lights Spritus Singers did three performances of their show Believe in Christmas at the Nancy Appleby Theatre Dec. 13-15.

The choir first formed in 2002 and has up to 85 members every year with weekly rehearsals since September leading up to the pre-Christmas performance.

Choir member Carla Yeaman said during the intro that it is their hope that the show will impact the audience.

“We hope that it will refresh everyone’s spirits and renew their hope and joy to believe in Christmas all over again,” Yeaman said.

“We have a great following that come here every year,” Cook said. “People usually have to come in up to an hour early or else there are no seats left.”

Cook has conducted the group for their entire run. She added she’s been in charge since even before they were called the Northern Lights Spiritus Singers.

“We have had two others who have been there the entire 18 years, including my sister,” she said. “She’s been there through thick and thin from the very beginning and she is very much a part of making this choir a success.”

Nine-year-old Isabella Neufeld was the youngest performer on stage this year. She said she really loved the experience of being part of the singers.

“My favourite song was the ‘Little Drummer Boy,’” Neufeld said. “I watched them last year, and I loved it so much that I joined this year along with my parents and my 12-year-old brother. I love being with all the people in the choir, and I plan to be back once again next year.”

Long-time choir member Simone Newberry took a break this year due to a knee operation but plans to be back next year.

“I really enjoy being part of the Northern Lights Spiritus Singers, and I got to see this year’s performance from a front-row seat,” Newberry said. “Parts of this performance just moved me to tears it was so good.”

Sixteen-year-old Keenan Sikora watched the choir with his girlfriend.

“My dad performs in the choir,” Sikora said. “I really appreciate all the harmonies and how they seem to have a lot of good practice with it.”

Keith Guay, who has been married twice, has watched both of his wives perform as part of the group over the years. He said it is very cool to have the privilege to watch the show.

“I watch the show every year,” Guay said. “I watched my first wife perform before she passed away, and then my second wife ended up being choir member. I’ve been really blessed to have been involved in the choir in one form or another for a long time.”

Huyana Turner drove from Boyle with her four-year-old daughter Evra to watch the concert.

“I’ve watched the performance for about eight years, and Evra’s been coming here since she was an infant,” Turner said. “I really loved the mix of voices that made up the wonderful performance. My daughter really enjoyed the live painting up on one of the screens in the top corner. She said she watched it the entire time.”

Local artist Ada Berger did a live painting of an angel at one of the corners beside the stage during this year’s performance.

“This is the first time I’ve done this live, but three or four years ago I did a pre-recorded version at home and they just set up the video feed for the performance,” Berger said. “It was really fun doing it for each hour and a half during every performance.”

Yeaman said in lieu of admission, the charge for getting into the show was a donation to Athabasca Santas Anonymous.

“We hope to encourage families in our community to celebrate the Christmas spirit,” she said.

Cook added they would normally give only half of their proceeds to Santas Anonymous.

“But the need was so great this year that we were happy to donate all the proceeds,” Cook said.

Boyle Chamber of Commerce facing dissolution
Feb 24, 2020 12:01 PM
Comments
We welcome your feedback and encourage you to share your thoughts on this story. We ask that you be respectful of others and their points of view, refrain from personal attacks and stay on topic. To learn about our commenting policies and how we moderate, please read our Community Guidelines.