After serving for almost four years, Athabasca-Sturgeon-Redwater MLA Colin Piquette announced in a statement Feb. 5 that he is bowing out of the race for the NDP nomination in the new Athabasca-Barrhead-Westlock riding.
0
Feb 6, 2019 12:00 PM By: Bryan Taylor 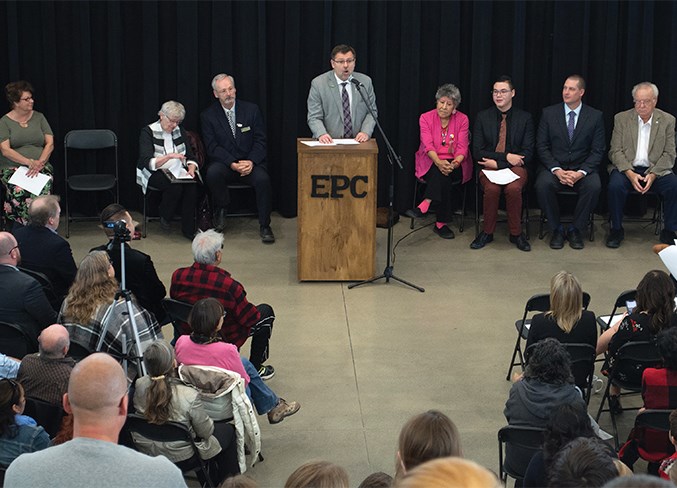 Athabasca-Sturgeon-Redwater MLA Colin Piquette spoke at the opening of the new Edwin Parr Composite School Oct. 24. The state-of-the-art facility welcomed the first batch of students through its doors in September 2018.

After serving for almost four years, Athabasca-Sturgeon-Redwater MLA Colin Piquette announced in a statement Feb. 5 that he is bowing out of the race for the NDP nomination in the new Athabasca-Barrhead-Westlock riding.

In the statement released on Facebook, Piquette cited family as the main reason why he is stepping back. Speaking to the Advocate Dec. 29, he had said he would be jumping into the race.

Currently the MLA for Athabasca-Sturgeon-Redwater, Piquette said in the statement that while he loves the job, it has come at a cost to his family.

"This is one of the hardest decisions I have ever had to make and it has been some time in coming," he said in the statement. "But I am now at last convinced I am making the right one for myself and for my family."

Piquette stated that being an MLA has been "the greatest honour" of his life and "the most amazing job" he has ever had the privilege of doing.

"I have been enriched beyond measure by getting to know so much more about the people and places of Athabasca-Sturgeon-Redwater, and the rest of Alberta," he said. "But now it is someone else's turn."

Piquette won his seat in Legislature May 5, 2015, after defeating then-Tory cabinet minister Jeff Johnson by 1,778 votes.

His father Leo was an NDP MLA for the area for one term in the late 1980s, making them one of only a few parent-child pairs ever to serve as MLAs in Alberta.

Piquette said in his statement that his job as an MLA has been especially hard on his son Luke.

"In particular, I know it has been hard on my youngest son Luke who has special needs and who benefits the more I can be involved in his life on a day to day basis," Piquette said. "Being a rural MLA means many nights away from home, endless hours of driving at all hours and in all weather conditions."

He also said the size of the new constituency also played a role in his decision.

"As it stands now my present riding is “only” 13,000 sqr km in size and laid out on a north-south access to Edmonton making it possible to visit communities on my way back and forth to meetings in the city," Piquette stated. "The new riding come this spring will be almost double that size spread west to east. For perspective, this is about half the size of Nova Scotia and just a little smaller than Belgium."

Piquette called it a lot of territory for one person to cover on a regular basis.

"I have made no secret of my concerns over the electoral boundary changes and the negative impact they would have on effective rural representation," he said. "But I always somehow expected that if they did come to pass I would find a way to overcome the challenges they posed and make it work. However, as the election has drawn close and campaign preparations have begun in earnest, I realize just how much serving these new boundaries would demand."

Glenn van Dijken, the MLA for Barrhead-Westlock-Morinville, remains the only nominated candidate in the constituency to date. He won the nomination to run for the United Conservative Party (UCP) for Athabasca-Barrhead-Westlock July 14.

In an email dated Jan. 31, Alberta Party executive director Mark Taylor said while they have not announced a candidate yet for the constituency, they are committed to running 87 candidates across the province and will likely have a candidate named by mid-February.

"There have been a number of people who have expressed interest and we are proceeding with internal vetting," Taylor said.