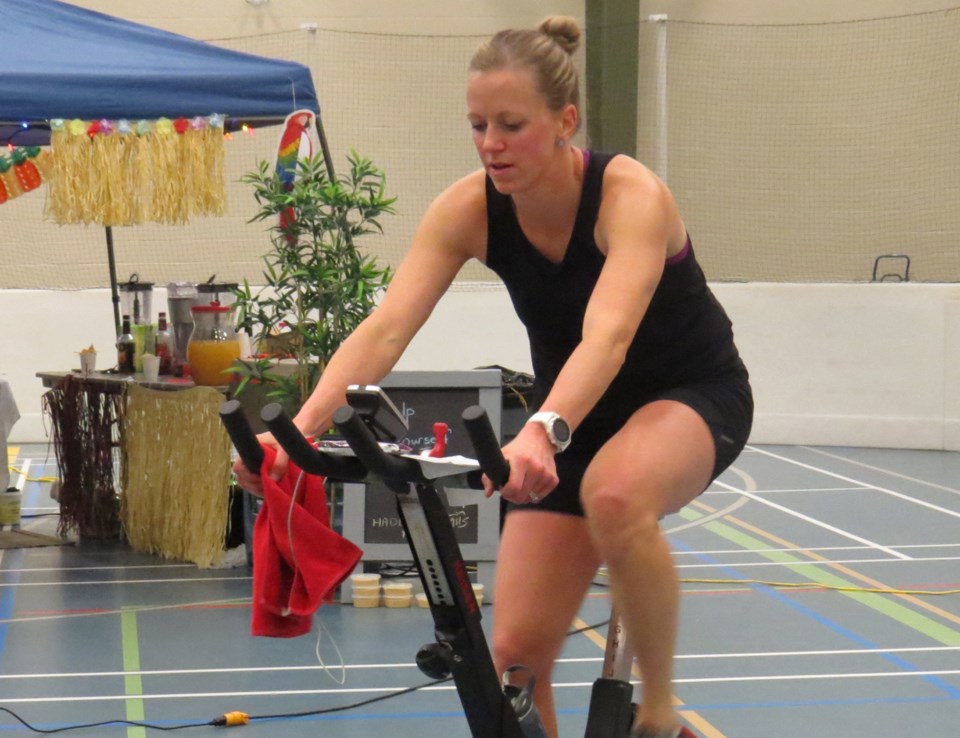 Just over 70 people mounted an exercise bike from 10 a.m. until 4 p.m. to raise money for the Alberta division of the CMHA, with three riders going the full six hours, while the rest formed teams and took shifts for an hour, or two.

Leading the effort was Glenda Gray, the wellness coordinator at Aspen View. She was also one who stayed one the bike for the full allotted time.

“We made about $5,500 this year,” Gray said. “Some participants watched their teammates in between shifts, while others went for lunch and came back. We also rented an extra third at the field house so kids can play and cheer on their parents.”

She added there were a good mix of participants taking part.

“Kids and adults, men and women. It was open to everyone,” Gray continued. “The youngest participant we had was nine years old.”

She also said one participant also cycled some of her time at the hockey arena.

“(Laurie Kiselyk)’s daughter was also playing hockey that day, so she wheeled her bike into the rink and did an hour and a half of spinning in the arena and collected donations,” Gray said.

Nine-year-old Paige Hefferan said it was fun doing a one-hour shift on one of the bikes.

“I love being tired afterward, but being active,” Hefferan said. “I’m excited to help out and ride to do my part.”

Athabasca RCMP Const. Jay Tessier also took some time out of his schedule to take part in the event.

“It’s all for a good cause,” Tessier said. “It’s the first time I took part in a spinning class, and it doesn’t matter if I’m one of the very few guys here. I would definitely do it again next year.”

Gray said most of the exercise bikes used during the event came from the Multiplex itself.

“I brought one from home, as well as (fellow participant) Lisa Stocking. Another one came in from LTIS,” Gray explained. “I did not want to turn anyone away. We had one group of teachers from Boyle who also brought in a full-on tiki bar, including blenders and food. Everyone really made a party out of this event.”

One of the team members from Boyle included Grade 1 teacher Deirdre Keller.

“It was a lot of fun,” Keller said. “It’s a neat idea to get the whole community out to get involved and moving on such a cold day.”

She added she personally decided to take part because she owed a friend of hers a favour.

“She did something for me, so I promised to join her team called Your Pace or Mine,” Keller said. “Mental health is also a big issue in any school when you're working with kids. I’ll definitely be coming back next year, and I would encourage others to do it as well.”

“Doing something physical ensures everyone knows they are getting something good for their mental health by being with other people and staying active,” she continued. “Even the people not on the bikes just sitting around and conversing with each other is just as valuable as anything.”