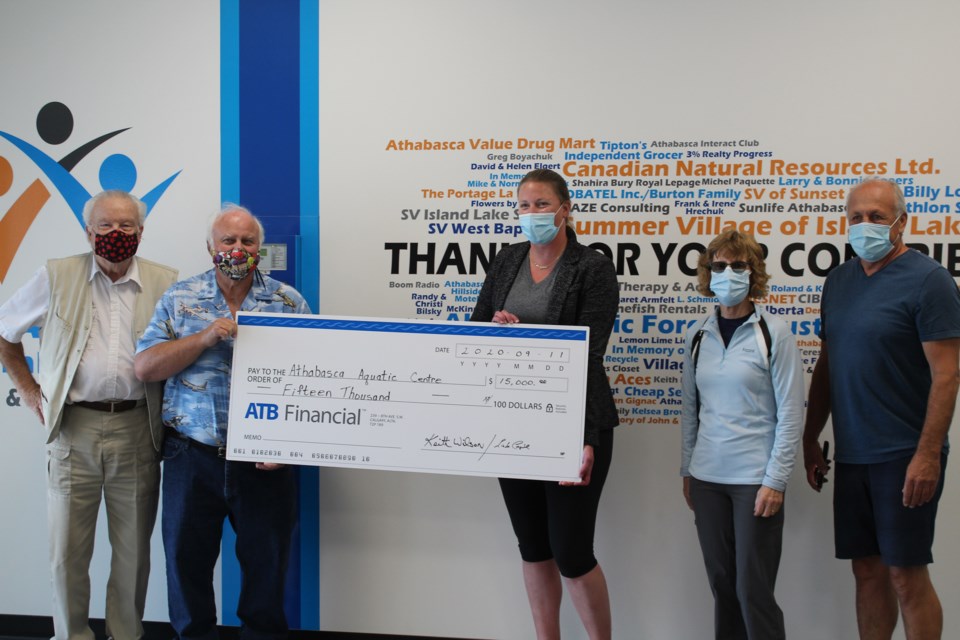 ATHABASCA – The Summer Village of West Baptiste made a five-figure contribution to the Athabasca Regional Multiplex last week — its second in as many years.

Officials from the summer village met with their counterparts from the two Athabasca municipalities that oversee the Multiplex, at the facility Sept. 11, and they came bearing a cheque for $15,000 that will go towards a pump at the aquatic centre. Another cheque for the same amount was delivered last year, for general use in the aquatic centre, said Summer Village of West Baptiste mayor Keith Wilson.

“The money is raised the usual way, through taxes et cetera,” Wilson said. “Last year we donated the same amount for general use in the aquatic centre.”

Athabasca County reeve Larry Armfelt mentioned the county and the summer village have a very neighbourly 50/50 working relationship, and have worked on projects together in the past. He noted the paving of a road between summer villages at Baptiste Lake was a joint venture.

“We went together and split the cost on paving a stretch of road,” said Armfelt.

Wilson agreed and noted the paving was required as it was a one kilometre gravel stretch between two other paved areas and did not make sense to leave it as gravel.

“It would get muddy and it needed to be done and we worked with the county on that,” he said.