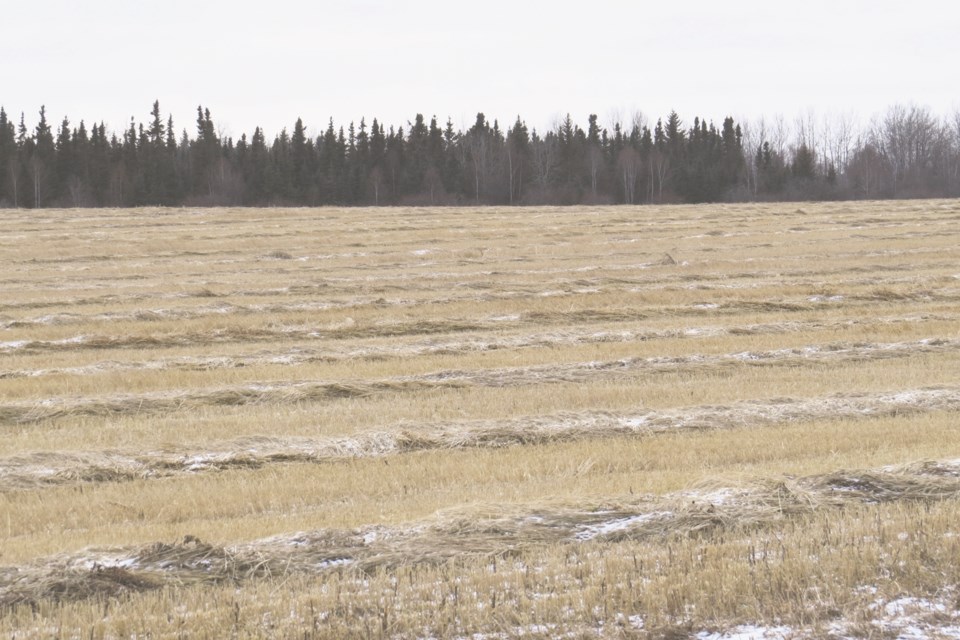 This swathed hayfield located at the southwest corner of Highway 63 and Township Road 670 remains in the field after the first snowfall of the winter season hit Nov. 9. Athabasca County Agricultural Services Director Ron Jackson said roughly 13 per cent of crops were still left to be harvested in the county before the snowfall hit. Bryan Taylor/T&C

ATHABASCA - Many farmers across the province continue to face unharvested acres of crops that were blanketed by snow Nov. 9, including those in Athabasca County.

According to Ron Jackson, the agriculture services director for the municipality, 35,000 acres out of 275,000 remains unharvested.

“How much crops our farmers were able to get into the bin depends on which part of the county you are driving through,” Jackson said.

“The Wandering River and Grassland areas are probably worse off than anyone in terms of percentages of crops left in the field. Those two areas were hit the hardest, as they did not have much suitable weather available to harvest their crops.”

He added that according to the Alberta Crop Report, roughly 90 per cent of the crops in the region, including Athabasca, were in the bin.

“Yields were pretty good overall,” Jackson continued. “It was a better season this year for moisture and sunshine.”

But despite the issues of snow, he said some crops can be salvaged.

“Canola can be harvested later on, but there is still the potential for quality losses due to wildlife and harsh weather,” Jackson explained. “But if it’s a cereal crop like wheat and barley, it’s toast.”

According to a Nov. 18 press release, the Agricultural Financial Services Corporation said it has options available for clients with cash flow challenges, including a post-harvest advance or a preliminary payment.

They added farmers could receive a portion of their estimated claim as an early payment within days of submitting a harvested production report.

“Harvest 2019 has been tough for farmers. Trade disputes, bad weather and high input costs have added up to be a difficult year. With all the uncertainty, Alberta farmers can count on their government to find efficiencies and fund business risk management programs, fight carbon taxes and promote free trade,” stated Alberta Agriculture and Forestry Minister Devin Dreeshen in the release.

The release said the AFSC will consider deferring loan payments, on a case-by-case basis, and will also extend production insurance coverage to unharvested crops until the crop can be combined in the spring or managed by other means.

As well, the AFSC added that clients with a substantial percentage of insured acres remaining unharvested at the onset of winter may be eligible for an unharvested acreage benefit through the annual production insurance program.

“Our programs recognize producers can’t control the forces of nature, and they are designed to respond in situations like this,” AFSC CEO Steve Blakeley said in the release. “We are here to help and ready to work with our clients to support them through this difficult time.”

The AFSC encourages those who may be struggling or need additional support to check out The Do More Agriculture Foundation website at https://www.domore.ag/resources for a list of mental health and well-being resources.

Also, more information on what insurance options are available for each farmer’s individual situation can be found by calling the AFSC Client Service Centre at 1-877-899-2372.