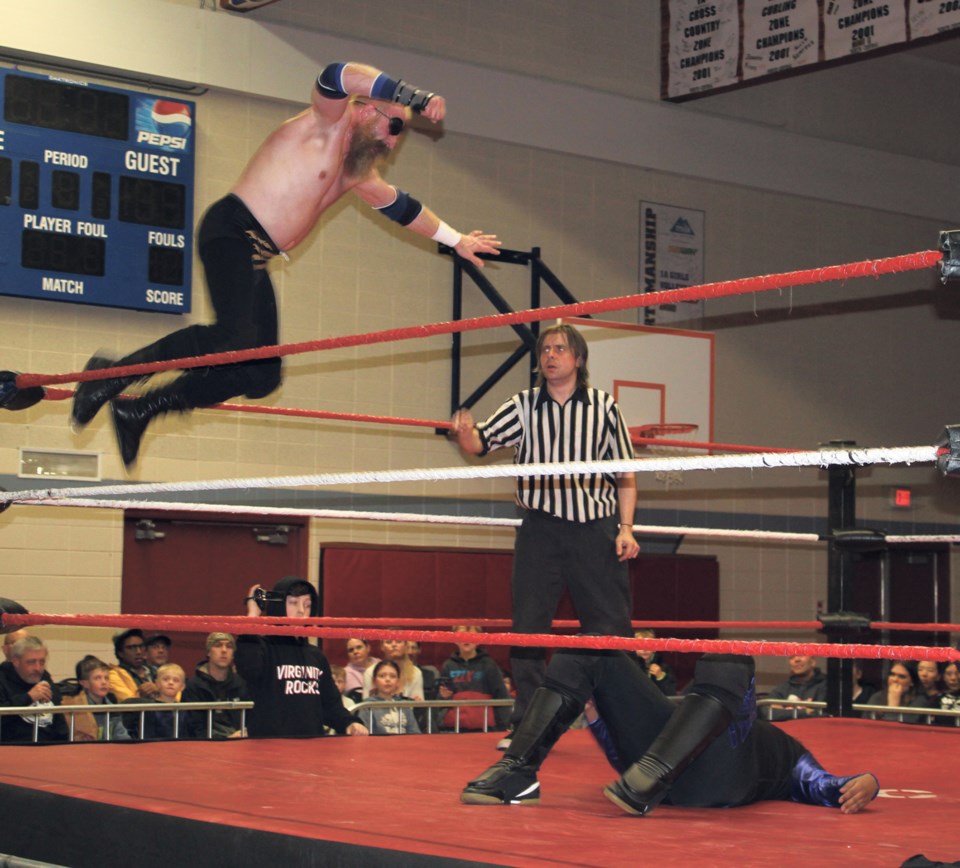 Viking Rage takes the leap in order to pummel new kid T. A. Jackson at the RCW Live Pro Wrestling event Feb. 28 at Boyle School. The event was a fundraiser for the school’s Playground Committee to get a new playground built. Bryan Taylor/AA

BOYLE – There was cheers and jeers at the Boyle School gymnasium Feb. 28 as 14 wrestlers from Edmonton-based Real Canadian Wrestling (RCW) arrived in the community for a live pro-wrestling show.

About 250 people packed the gym for the event put on by the Boyle School Playground Committee, which raised around $5,000 to help build a new playground.

RCW owner Steven Ewaschuk said they got more people than they expected at the event.

“The crowd was into it as it was the first time the community has seen small-town wrestling in 20 years when Stampede wrestling came through,” Ewaschuk said. “It’s all for a good cause, and the fighters all put on a great show.”

The first event of the night featured Kato, who said how much he hated seeing the community of Boyle, versus Rugged Rich King who praised the community and said what a wonderful place it was to be. To the satisfaction of the crowd, Rich King was crowned the winner.

“I’m originally from Whitehorse, Yukon, have been wrestling for the past two years and I just joined the RCW circuit a month ago,” King said. “It was a good little win. Boyle is a really nice place, and I hope to check it out more before I leave. The community is one of the best crowd’s I’ve ever wrestled in front of, and I look forward to coming back in the future.”

One wrestler who was not a crowd favourite was Nathan “Nasty Nate” Spence, who lost his match-up against his seven-foot opponent, known as Giant Orion.

“Why didn’t they like me? It’s the Boyle country folk. I’m from the big cosmopolitan city of Edmonton, and these folks don’t seem to recognize true talent,” he joked after the event. “But seriously, I will say it was a fantastic show with a massive crowd. It made it well worth the drive to come up here. I’m glad that we can help support the park. They just need to get a picture of Nasty Nate in the park.”

“It was a lot of fun being here in Boyle. We had a really good time here,” Koenig said. “I would absolutely come back. I mean the fans just hated us and really made it all worthwhile.”

His son added he was fine with the crowd cheering on his opponent.

“I didn’t really like them either,” he joked at the end. “It was a great match-up. Kid Cyrus was a tough opponent to beat, but I did it. I told the crowd I would do it, and I always keep my word. It was a great crowd, and I would definitely come back again.”

Boyle School principal Sharon Kucey said having the RCW in the school was a really good experience for the kids as well as the town.

“It was a really good act that brings the community together. The hysteria makes it a very unique thing to do here in Boyle,” Kucey continued. “Earlier in the afternoon, some of the fighters did come and have a talk with our students about anti-bullying and staying in school. I’m also happy to say the wrestlers remained civil with each other throughout the day.”

Playground committee member Bob Kowalchuk added he’d like to thank all the sponsors who came in and helped make the event happen.

“It’s for all the kids and the people who bought tickets,” Kowalchuk said. “We made between $4,000 to $5,000 from the event, including $450 donated by the crowd that evening for the playground.”

Local resident Lindy Johnson said the event took her back to when she was a kid watching pro-wrestling on television.

“I really loved booing the bad guys,” Johnson stated. “The kids really enjoyed it. Overall, it was an excellent turnout.”

Ewaschuk said they are hoping to come back to the community in May.

“We will either be here at the school or at the Boyle Community Centre,” he continued. “We still need to iron out the details.”

Bringing businesses together to survive the global economy
Mar 31, 2020 10:45 AM