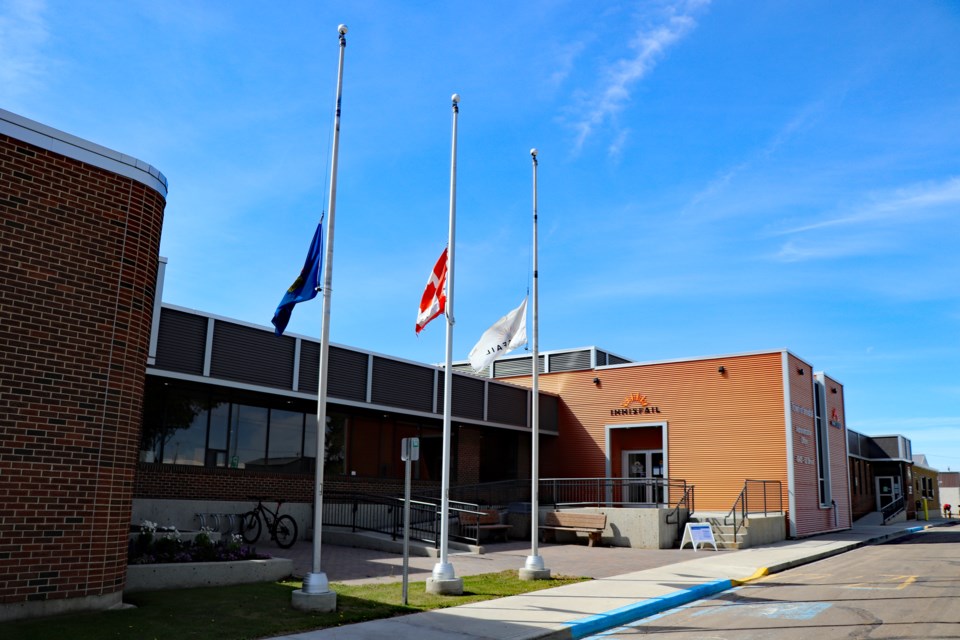 Government flags are now flying at half mast in front of the Town of Innisfail administration building as a symbol of respect and honour for the 215 indigenous children whose undocumented graves were discovered on the grounds of a closed residential school in Kamloops, B.C. Johnnie Bachusky/MVP Staff

INNISFAIL – The town has joined scores of communities in Alberta and across the country with the lowering of its government flags as a memorial and symbol of respect for the 215 indigenous children whose undocumented graves were recently found on the grounds of a residential school in Kamloops, B.C.

The decision by the town to lower its federal, provincial and municipal flags at half mast was made on May 31, said Todd Becker, the town’s chief administrative officer.

He said there was an informal conversation with members of council that was forwarded to him about process and procedure for when flags are lowered, and ultimately it would be his call.

Becker added the decision was then made out of respect to lower the three government flags that are located prominently in front of the administration building.

He added the provincial government has provided all municipalities on Monday they were encouraging them to lower their flags “until further notice.”

Mayor Jim Romane said it was obvious the entire country was “setback” over the grim revelation in Kamloops, adding it was “shameful” that it ever happened in “places of trust” such as on the grounds of the now closed residential school.

“It makes your body deflate when you hear this, what the heck?’” said Romane. “There was a point in time when I thought possibly that these residential schools (with) their intent I think was good initially when they were set up, to educate the aboriginal kids that weren’t getting educated but something went so badly sideways.

“For something like this to happen it just knocks the wind out of everybody. What could have happened that they would even think about of covering up something of that nature? What happened? I want to know what happened, and I am sure every body else want to know too."

All Canadians need better information to find out what happened and who was responsible for the tragedy, he said.

“Something bloody well be done about it and find out exactly what happened because somebody has gotten away with it,” he said.

As far as a possible memorial shoe tribute, like the many that have already been created in other communities across the country, Romane said he would be in favour.

“Yes, I would support that,” he said.