The 2021 Stanley Cup Playoffs have arrived in Edmonton and fans of the Oilers are more excited than ever.
May 19, 2021 4:56 PM By: Preston Hodgkinson 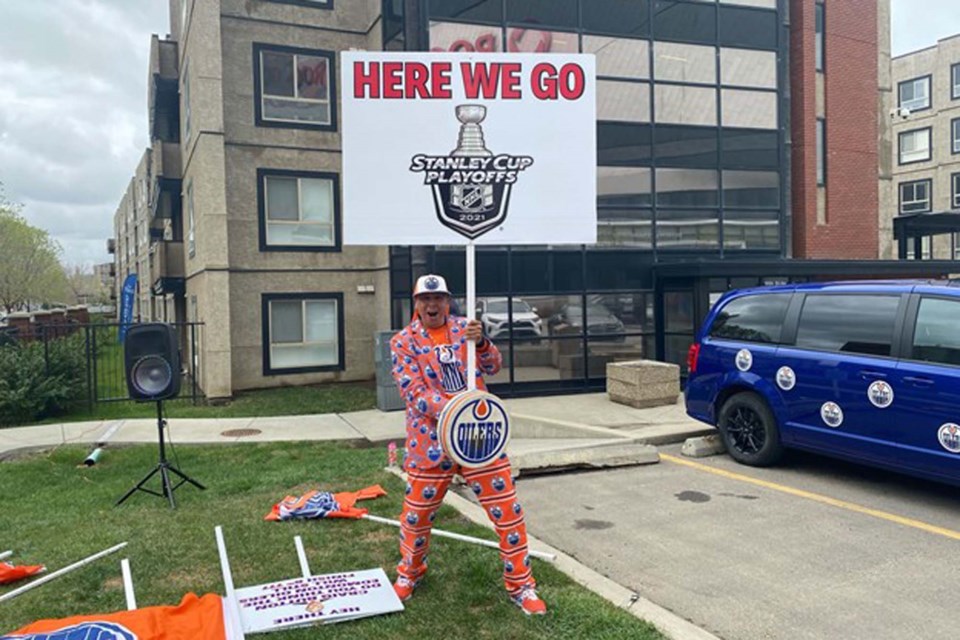 The legendary ‘Superfan Magoo’ was in front of Rogers Place ahead of Game One on Wednesday afternoon.PRESTON HODGKINSON/Photo

It has been quite a miserable week for Edmontonians. Rain has dominated the forecast with gloomy skies and even a little bit of snow to rub salt in the wound of citizens who are craving the few months of summer we get. Yet that didn’t stop a group of people from heading down to Rogers Place to cheer the city up.

The 2021 Stanley Cup Playoffs have arrived in Edmonton and Oilers fans are more excited than ever. The city has been known for producing an electrifying atmosphere when it comes to playoff hockey. Fans in the city bleed orange and blue, and when it was announced that Rogers Place would be closed to the public while the Oilers played out their season, there was a lot of disappointment.

However, not all is lost. Led by legendary Oilers ‘Superfan Magoo’, a gathering of passionate fans waving flags and leading chants can be seen ahead of the Edmonton Oilers first game of the 2021 playoffs. It is a rare sight to behold for fans of the team. The Oilers last made the playoffs in 2017 and this year will mark just the second time since the team’s Cinderella run to the Stanley Cup final in 2006.

Decked out in a snazzy orange blazer with the Oilers logo plastered all over it, it was clear that this was something Superfan Magoo took seriously. With a traditional Indigenous drum emblazoned with the Oilers logo in one hand and a sign in the other, Magoo’s energy and passion was clearly seen by passersby, who were liberally handing out supportive honks. 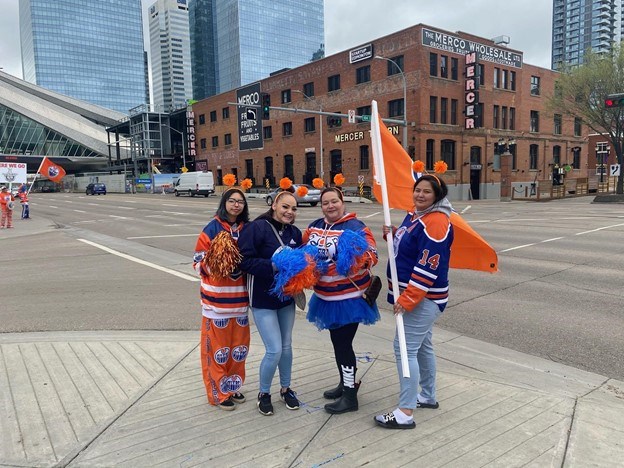 A group of Oilers fans stand on the corners of 104 Ave. and 104 St. waving orange and blue pom-poms and flags. PRESTON HODGKINSON/Photo

Superfan Magoo’s real name is Blair Gladue, 47, and he has been an Oilers fan his entire life. His reputation as being among the craziest Oilers fans dates much further back than this year.

“I got the nickname ‘Superfan Magoo’ in 2006 (during the 2006 playoff run),” said Magoo. “I was out and about with flags, dressed up crazy and going crazy on the streets outside the Coliseum on Wayne Gretzky Drive.”

Not much has changed for him. He has been a loyal supporter of the team despite a decade-long playoff absence, and he re-entered the spotlight in 2017 when the team made their long awaited return to the playoffs.

“(I want to show) my crazy passion for our beloved Edmonton Oilers team,” said Magoo. “It doesn’t matter where it is or what’s happening, I am always wearing my Oilers gear or my superfan gear.”

That passion was hampered by not being able to be in the building for games. Despite that, Magoo made it a mission for himself to be outside Rogers Place for each regular season home game. He would set up right beside where the players drive into the arena so that he could welcome them.

“We would welcome the team into the building as they were driving in. (The players) would be waving and honking,” said Magoo. “We had signs and flags, showing them that the fans are still here and we love you!”

The pandemic has made social gatherings like hockey games virtually impossible. People who defy health restrictions risk getting others sick as well as heavy fines. Magoo is aware of that and has been trying his best to ensure that his crew of fans adhere to those rules.

“We have to be careful because you can only have so many people gathered together,” said Magoo. “You gotta make sure you spread apart, and if there are going to be any other people out there with us, they gotta make sure that they are in their own little section.

“Either way, we’re still going to be out there with music, welcoming the boys and going crazy to pump up the city!”

Their passion isn’t just limited to the outside of the arena. Magoo has been able to assemble a crew of Oilers fans who participate in convoys. Trucks and cars complete with Oilers flags and decals can be seen cruising through the city during the playoffs.

The pandemic has been able to stifle a lot of things, but a lot more will have to happen for Superfan Magoo to stop showing off his Oilers pride. He hopes the rest of the city stands with the team like he does.

“To all the fans out there, keep cheering loud and proud. Stay happy, stay healthy and no matter what, stay loyal to the Oil.”

Preston Hodgkinson is a freelance writer and regular contributor to Great West Media. This story was funded by the Google News Initiative.