'We watched as the world changed overnight' 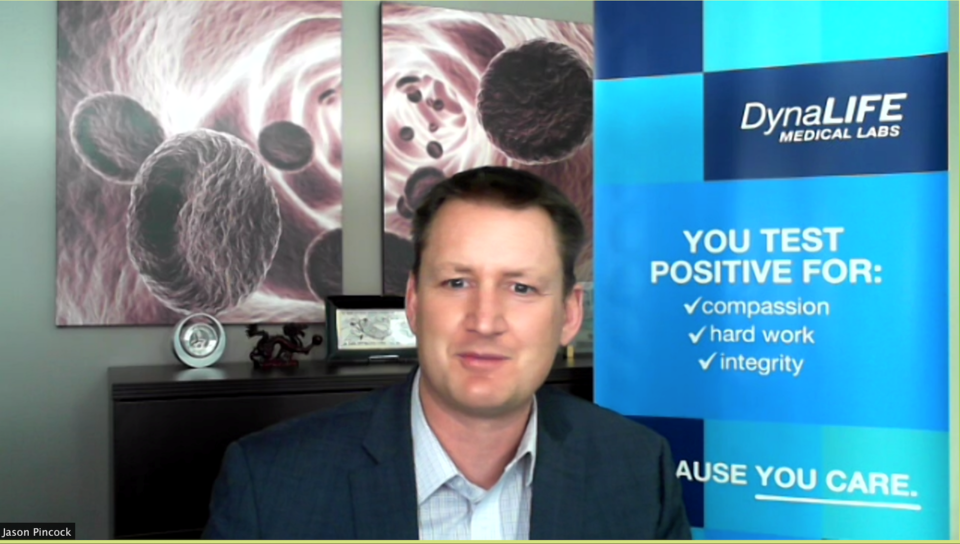 Jason Pincock, CEO of DynaLIFE and a St. Albert resident, speaks to the Edmonton Chamber of Commerce on April 21, 2021.SCREENSHOT

For DynaLIFE CEO Jason Pincock, the COVID-19 pandemic didn’t get real until he started seeing things like the NBA cancelling their season.

“We're watching what's going on in the U.S. and going, ‘We're way more responsible – that's not gonna happen here.’ And we watched as the world changed overnight," he said.

He remembers watching the price of masks skyrocket from 10 cents to $2.50.

“I remember, suddenly, spending half a million dollars buying masks and flying them from China on cargo planes from suppliers I'd never met before, hoping that they would actually show up and that our staff would have PPE to go to work,” he said.

On April 21, Pincock spoke to the Edmonton Chamber of Commerce on how his company has weathered the pandemic and managed to grow, and how they have worked to create safe workspaces and COVID testing technologies.

DynaLIFE offers diagnostic lab services and employs around 1,400 people in the Edmonton area and northern Alberta. It is one of the largest medical labs in Canada.

“All that testing that goes to your doctor comes to us, and we work very closely with AHS and public health. One of our unique challenges in the province is that everyone who is in our field works either for us, or for public health, and there's no other pool of people to draw from," Pincock explained.

“So, you can imagine going into a pandemic, what that has meant, as every lab in the world has scrambled to find the resources to support."

It meant almost 10,000 COVID-19 tests entering the building in one day to get tested – the equivalent of taking every man, woman and child in Morinville and lining them outside their door to get a swab then tested.

“It's been an unbelievable journey. And I will tell you that that journey has been really hard, but really important,” he said.

The scariest part of the pandemic for Pincock was sending his staff into the unknown during the first wave when they didn’t understand what they were dealing with yet.

He said they argued with medical staff and safety officers about whether or not COVID-19 was airborne and if masks and face shields were enough.

While they were putting their staff at risk, Pincock said they also had to make tough decisions. Dynalife shut down labs in specific communities to the general public so they could open those labs up to vulnerable people who had compromised immune systems.

“We were literally bringing people into the back door to keep them safe ... Those are really hard decisions as leaders to try and justify and explain. But we had no option, because if we had told people we were open, it would have flooded the place,” he said.

Pincock said his company was looking for ways to help and jumped at Alberta’s bid to have an NHL bubble in the province without taking away from public health support.

“My team took that challenge ... We thought it was really important for Alberta, and quite frankly Alberta needed to stay on the world stage,” he said.

Pincock said they gathered molecular scientists from the U of A and and through health innovation were able to create three novel COVID tests not created anywhere else in the world, which they shared with Canada’s national microbiology lab.

“That all started because we decided to take on the NHL challenge. We actually created new technology that public health and no one else had seen or was using to test for COVID,” he said.

The NHL bubble also had DynaLIFE creating a new workforce for the community. They reached out to the customer service industry to teach them how to swab for testing.

“They went from selling a T-shirt to doing a throat swab on an NHL player. And we did that alongside AHS – we had competency programs, we worked actually with NAIT and a number of other partner organizations, we created a workforce,” he said.

The NHL bubble also inspired them to create other bubbles.

“We built a lab in Calgary specifically focused on economic development support, which has brought film crews from across the world to come film in Canada because we can build bubbles here now. It has allowed us to host events – when every other province said no, Alberta said yes,” he said.

After all this success, Pincock said he received a call from public health. AHS was seeing what was on the horizon for the fall with regards to the pandemic. They told Pincock they needed him on the public health frontline.

“The challenge was, they couldn't give us resources. We couldn't interfere with their supply chain. We couldn't do anything. We put our science team back to work,” he said, adding the province was asking them to have capacity to test a third of the population for the second wave.

“I'll tell you, it was really scary ... It still makes me sick to my stomach as we thought through how we were going to try and solve that problem. And of course, we said yes. (We) couldn't say no – there was no no option,” he said.

They gutted the first floor of their DynaLIFE building in Edmonton and built four COVID labs. They found used equipment from wherever they could find it.

Pincock said it’s been hard but there have been many bright lights in the province. He said Alberta’s infection numbers might be high, but we also have the most advanced testing system in Canada.