Grade 5-6 students at Dunstable School to lay wreaths on veterans’ graves at Our Lady of Lourdes Catholic Church Cemetery on Nov. 9
Nov 7, 2020 10:00 AM By: Kevin Berger 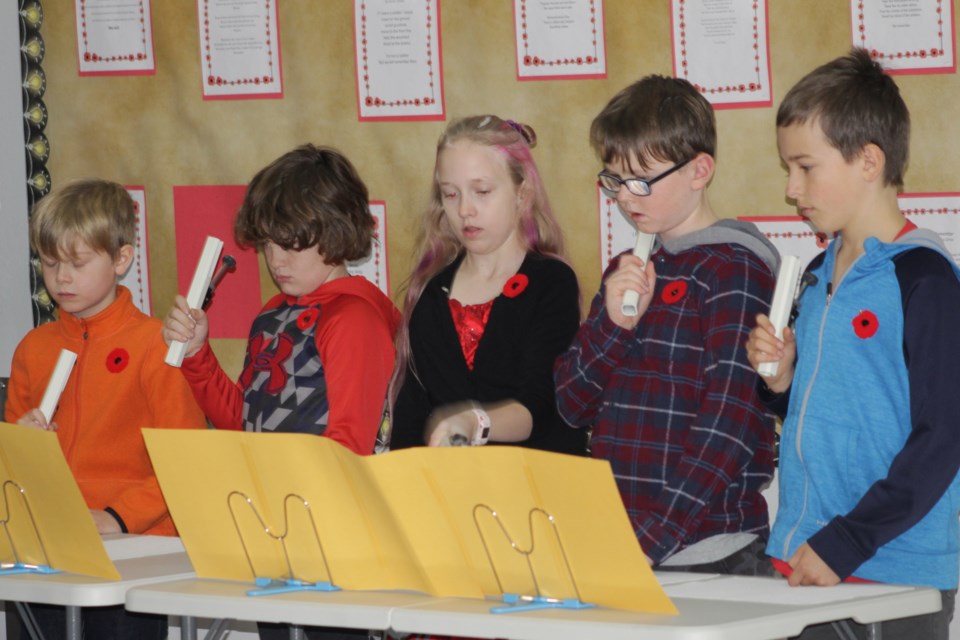 Dunstable School students use windchimes to perform for their schoolmates, staff and parents during the Remembrance Day ceremonies in 2019. Dunstable School is still holding a ceremony this year, but because of restrictions around large gatherings, the proceedings will be videotaped and the recording will be sent out to parents.

While the COVID-19 pandemic is largely forcing local schools to restrict their Remembrance Day activities, Dunstable School is pushing forward with a more traditional slate of events, albeit with very limited public participation.

Dunstable School principal Tammy Tkachuk said Grade 4, 5 and 6 students will be going to the Our Lady of Lourdes Catholic Church Cemetery at Lac La Nonne on Monday, Nov. 9 to place wreaths on the graves of those who served in the Canadian Armed Forces.

She noted that the Legion had already been out to the cemetery to set out flags on graves.

Then, on Tuesday, Nov. 10, they will hold a traditional Remembrance Day ceremony at 10:30 a.m. This ceremony will be videotaped and shared with parents “as we are not able to invite them into the school this year,” Tkachuk noted.

She said their Grade 5- 6 students have a Powerpoint presentation to share with the rest of the school that will contain some history about the First and Second World Wars, as well as the Korean War and Canada’s many peacekeeping missions.

“Each year, we try to highlight the contributions of different individuals to the war effort. Last year, we learned about Cree Code Talkers and the role they played during the Second World War,” she said.

Tkachuk said they will also observe a moment of silence at 11 a.m. and then each of their classes will perform for the rest of the school.

Tkachuk noted they also have students working on posters and poems to submit to the Legion’s Poster and Literary Contest, and much of that artwork is on display around the school.

Each year, they have a number of students enter the Legion’s contest. Several students won at the local level last year, and one student actually came in third place at the district level for a poem.

At Barrhead Elementary School, principal Dale Bujold said they decided to change things up with their Remembrance Day plans.
Instead of gathering all of their students for a ceremony in the gymnasium, Bujold said he’s created a Remembrance Day video that all students will view at 11 a.m. on Tuesday, Nov. 10.

He said some classes have done a short performance that will be included in the video, such as a poetry-reading or playing a song. The video will then cap off with a message from the principal.

Bujold said teachers have been given activities do in their classrooms after the video is shown.
Likewise at Barrhead Composite High School, teacher Barb Sabiston said there will be a virtual ceremony that will be shown in all classrooms on Tuesday, Nov. 10.

The high school band will be performing during the ceremony, and she has enlisted two students to read a prayer. Another student will also perform the Last Post.

At Fort Assiniboine School, there will be a virtual presentation broadcasted to students at 10:55 a.m. on Tuesday, Nov. 10.

Principal Lorna Hiemstra said Cpl. Zackery O’Leary will be their guest speaker for this presentation. He will be providing a pre-recorded message about his duties in the Canadian Armed Forces and answering questions that were sent to him by students.

The Kindergarten class will also recite the poem “Little Poppy”, while the Grade 1-2 students will perform O Canada using sign language and Grade 3-4 students will present “In Flanders’ Fields.”

Finally, the Grade 5 and 6 students will present their Legion contest essays and poems, while a few junior high students will act as emcees and explain why they practice two minutes of silence.

Neerlandia Public Christian School could not be reached as of publication deadlines. However, on Nov. 9, principal Brett Seatter reached out to the Town & Country Today to let us know they are holding a whole school assembly where all the classrooms will join in via videoconferencing. There will be live speeches, followed by a minute of silence.

At that point, the classrooms will sign off on the video conference and teachers will show some pre-recorded videos of musical performances that are too difficult to share over the videoconference, Seatter said.

He added that the Grade 4 students also participated in "No Stone Left Alone" last week and some footage of them laying flags on graves will be included in the videoconference.