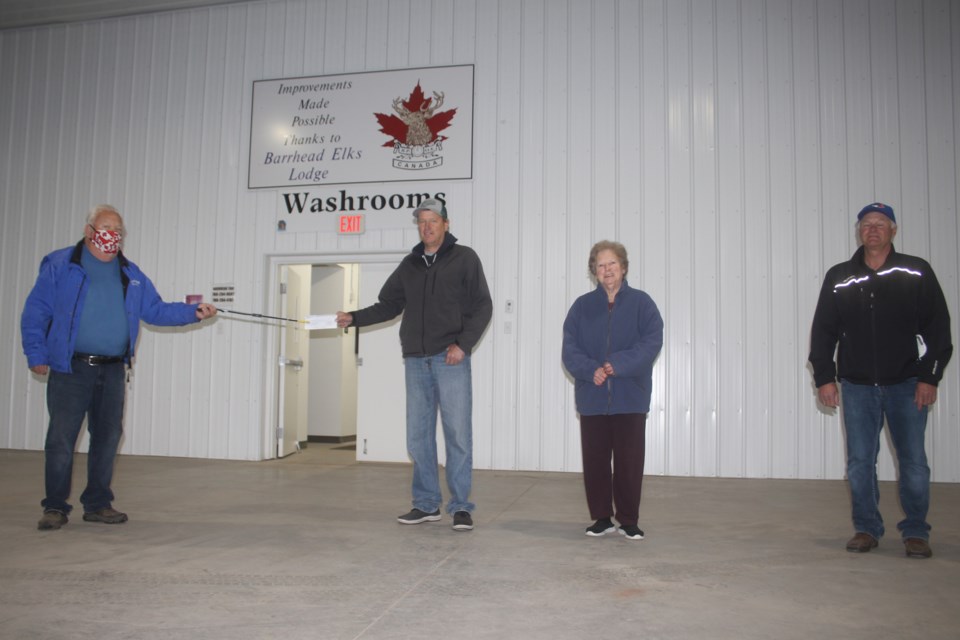 Following social distancing protocols, Bill Lane of the Barrhead Elks Lodge (far left) hands a $10,000 donation to Barrhead Agricultural Society president Randy Schmidt (second from left) inside the Bablitz Exhibition Hall on May 21. To Schmidt’s right are Ag Society secretary Lynn Down and Barrhead Elks member Cal Fischer. The donation will be used to help pay for a fire alarm system that the Ag Society was required to install following the completion of an addition on the Bablitz Exhibition Hall. Incidentally, the Elks also helped with the cost of that addition, chipping in $40,000.

BARRHEAD-While the spread of COVID-19 may finally be slowing in Alberta, the economic damage of the pandemic has forced the cancellation of the Barrhead Blue Heron Fair in August and the Wildrose Rodeo Finals in September.

Recently, the Barrhead Agricultural Society posted an update to its website announcing that both events have been postponed and will hopefully return in 2021.

President Randy Schmidt said both events basically happen through the support of local sponsors, and the Ag Society felt it would be very hard to go and ask for money from local businesses that have had their doors closed for months.

“Do you really want to be asking businesses for support when times are tough?” he said. “I didn’t want to be the guy knocking on the door and it turned out that nobody else really wanted to either.”

Agricultural Society secretary Lynn Down also pointed out it takes a full year to co-ordinate events for the fair, and even if Alberta completely opened up in June, that would only leave a couple months to arrange things.

As for the rodeo finals, Schmidt said the Wildrose Rodeo Association depends on the smaller rodeos that are held throughout the season to even host the finals.

He noted this is now the time of year when there would be two to three rodeos per weekend, but most of these smaller rodeos have been cancelled.

“Without any kind of a season, it’s pretty hard to have finals,” Schmidt added.

Of course, this raises the question of whether the cancellation of these events puts the Ag Society in a precarious financial position.

Schmidt’s response to that question is “yes and no” — while they aren’t bringing in any money, they also don’t have the expenses associated with those events.

That said, the Ag Society recently finished building an addition on to the Bablitz Exhibition Hall, which is located on their grounds.

Schmidt acknowledged they were hoping for a profitable Barrhead Fair, which would help with some of the costs of that addition.

“It will be a weird year,” he said. “Let’s just hope it’s just this year and we don’t have to do this again.”

Last week also saw the Barrhead Agricultural Society receive a $10,000 donation from the Barrhead Elks Lodge, which the society will put towards a new fire alarm system in the Bablitz Exhibition Hall.

The donation will cover just under half the cost of the $22,000 fire alarm system, which the society had to install in order to host any large events within the hall.

Schmidt noted the Barrhead Elks also supported the construction of the addition with a $40,000 donation back in January 2019.