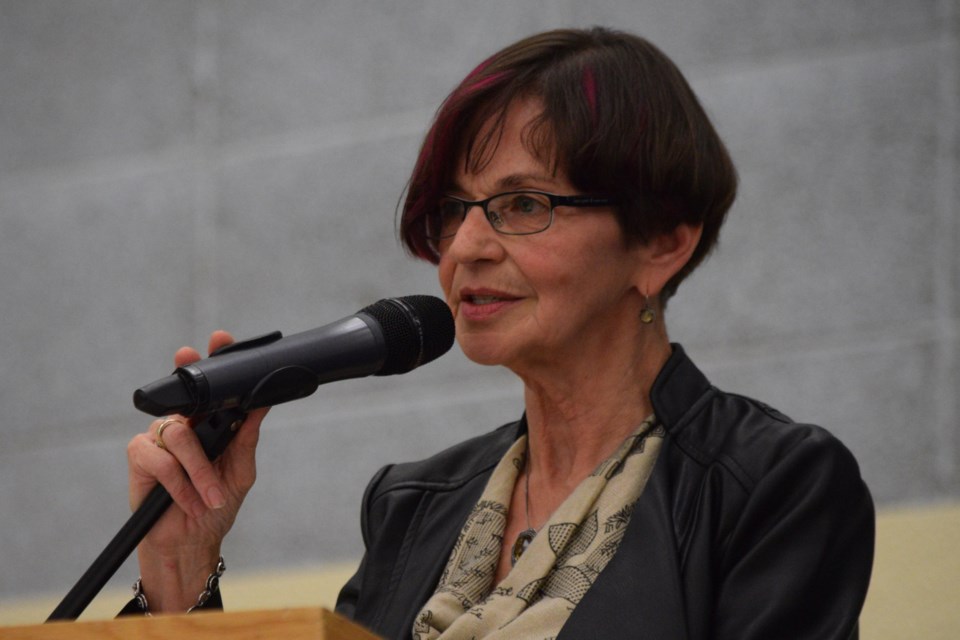 Ros Rudd will be officially stepping down from her duties as FCSS volunteer coordinator just before the Christmas break. Rudd is pictured here at the Volunteer appreciation luncheon in 2018.

BARRHEAD-In the new year, a familiar face will be missing at the Barrhead and District Community Support Services (FCSS).

After eight years, Ros Rudd will be stepping down from her position as volunteer coordinator.

As part of her position, depending on the year, Rudd oversaw everything from the food bank, Coats for Kids, Santa's Toy Box and Christmas hamper programs, the school liaison and mentorship program among others.

The Barrhead Leader first learned about Rudd's departure at a County of Barrhead council meeting in early October when Coun. Darrell Troock and Coun. Ron Kleinfeldt, among others, suggested that the municipality consider nominating her for a Star of Alberta Volunteer Award.

The government awards “highlight and pay tribute to volunteers who give their time, energy and skills to make a difference in the lives of Albertans.”

"I came to FCSS to fill in temporarily for a maternity leave and I never left," she said.

Rudd took the position, shortly after retiring from a lengthy career in education, much of it with schools in Pembina Hills School Division (PHSD).

However, her education career started in Flin Flon, Man. where she was an early education specialist, teaching Kindergarten for 14 years, before moving on to Grades 1 and 3.

Rudd started her career with PHSD at Dunstable School teaching Grades 3/4 and 5/6 eventually moving into administration while teaching at the same time.

"It was a great school. I really enjoyed my time there," she said.

After 11 years, Rudd moved on to Barrhead Elementary School, where she was principal for five years before she decided to retire.

Rudd wasn't retired long before she decided to take on what she believed to be a temporary position at FCSS.

"I don't know what made decide to do it," she said. "I just really like what they do at FCSS. I like their connection with the community, the people and that they have such a pension for wanting to help."

Rudd added that Barrhead's FCSS is especially special compared to others in the province in that it an entity of its own and as such has several programs that fall under its umbrella that normally fall to other agencies or just don't exist.

The Barrhead FCSS receives the bulk of its funding through provincial and municipal government grants in an 80-20 per cent split, with the province being responsible for the larger portion. This funding can only be used for programs of a preventative nature. But as a non-profit-society, FCSS can seek out other funding sources, whether it be other government or private grants or through its other fundraising efforts for its other programs, such as the previously mentioned food bank and Santa's Toy Box.

And although Rudd is retiring, she and her husband have no intention of leaving the community.

"We love it here, it is and always will be our home. But that being said I would like to be able to do more camping and golfing and once we can do so, do a lot more travelling and just spend more time with my family, especially my grandchildren," she said.

Rudd added she purposely chose to leave just before the new year so she could see the Santa's Toy Box and Christmas hamper programs to completion one more time.

"I have just loved my time at FCSS. I wish everyone would be able to have a stint at working or volunteering here. It is just so heartening to see how people support each other. It is just wonderful. Barrhead is a special community and you really get to see it here at the FCSS," she said.

Restauranteur says disobeying public health restrictions make it harder for businesses to survive
May 4, 2021 11:00 AM
Comments