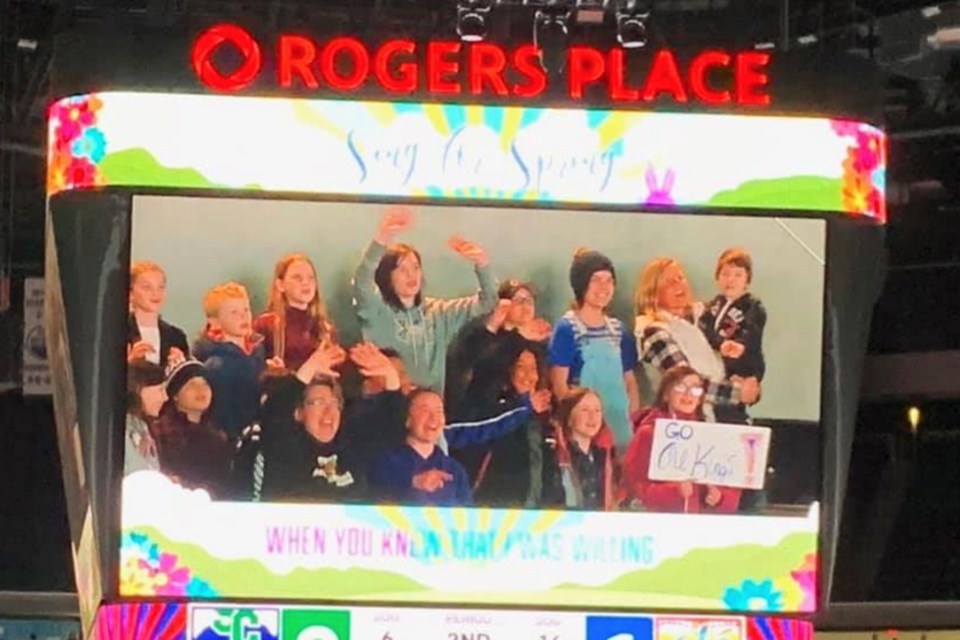 In this image taken from the school's Facebook page, the Fort Assiniboine School choir cheers on the Edmonton Oil Kings during their home game at Rogers Place March 6. The choir came out to the game as part of the “Sing for Spring” event hosted by the Oil Kings. A total of 22 students and 28 parents/grandparents went to the game, along with hundreds of other Alberta students.

BARRHEAD - The Fort Assiniboine School choir recently got a taste of the wonderful and unusual places music can take them as they travelled to the Edmonton Oil Kings game at Rogers Place on March 6 to participate in the “Sing for Spring” event.

Music teacher Colleen Kiselyk said Fort Assiniboine School has participated in the Oil Kings’ reading programs in the past, where the team gives out tickets to schools who reach a certain reading goal.

This year, when the Oil Kings sent out promotional materials listing their various community programs, they mentioned the Sing for Santa and Sing for Spring events.

Kiselyk indicated Fort Assiniboine would be interested in participating in the latter, as the Sing for Santa would have clashed with their school’s Christmas concert. She later got notice that they had been invited to the springtime celebration.

“I think it’s kind of on a ‘first come, first served’ basis that they do that,” she noted.

Free tickets were provided for the two dozen or so Fort Assiniboine students and teachers who would travel to the March 6 game, although the other adult chaperones still had to buy tickets.

They took a school bus to the game and were set up on one side of Rogers Place with all the other choirs, Kiselyk said.

“There was a fair number of us. As they panned to the different schools, you could see groups of kids standing throughout the bowl. It was pretty cool,” she said.

Kiselyk noted they had been given six songs to practice prior to the game, which they sang in unison with the other school choirs. Microphones were set up next to the students to pick up their voices.

All in all, she said it was a “wonderful” experience for the kids, especially since the Oil Kings were able to defeat the Swift Current Broncos 4-1 that night.

“I’m so grateful that they did something like this, and I hope they continue to do that, because it is a wonderful program, and it allows for us to have a fun night out and have a great experience in the process,” said Kiselyk.

Besides the fact that many of the students had likely never been to a Western Hockey League (WHL) game before, Kiselyk pointed out the choir rarely travels outside of the school, as they mostly stick to school events where they perform for parents and grandparents.

And while that’s wonderful, “it’s nice to be a part of something bigger than that,” Kiselyk said.

She noted how, as a young girl performing in choir, she once travelled the world and got to sing for Princess Diana and Prince Charles at the Expo ‘86 opening ceremonies.

“Music can (open up your world), and bring you to places you wouldn’t go otherwise … This is just like one small step in that direction. But it’s an idea of the possibilities.”

It’s worth noting this trip would not have happened if it were a week later, as the WHL announced on March 11  that the remainder of the 2019-2020 season would be paused immediately due to the coronavirus crisis.