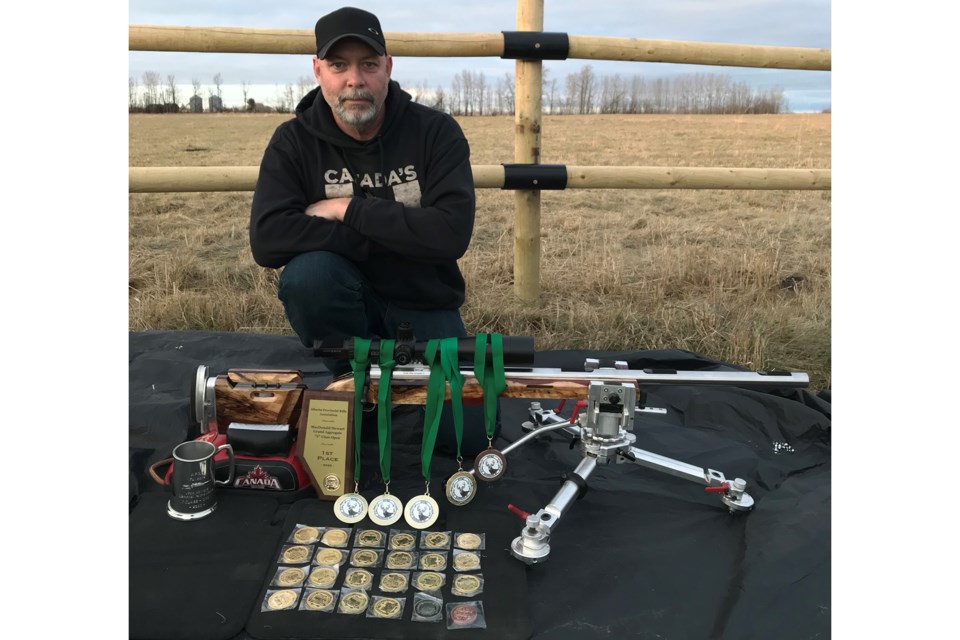 Brent Webster poses with his custom built rifle which helped him win countless of shooting competitions.

BARRHEAD - Brent Webster is one of the best F-Class competitors in the country.

The Neerlandia native is part of the Canadian F-Class Rifle Team and before COVID-19 he had been scheduled to compete in the world championships this spring and summer.

He was chosen to be part of the national team due to his overall shooting record, which is compiled by the Dominion of Canada Rifle Association.

And while Barrhead region has a world-class shooter in its midst, unfortunately, F-Class, shooting is a speciality that isn't well known.

"Even in the shooting world, it isn't especially well known," Webster said.

F-Class is a long-range rifle shooting discipline. Competitors in F-Class events shoot from a prone position, at a ringed-target, starting at 300 metres away progressing to 900-metres or longer.

Typically, a competition takes place over two days. On the first day, they would shoot at what they would consider short to medium distances 300-600 metres while the second day is devoted to long-distances, 800 to 1,000 metres.

"Long distance is where competitions are won and lost," he said. "And because of the rules this year [due to COVID], it was all long-range."

Although Webster said he has always been interested in guns and shooting he did not take up F-Class shooting until relatively recently.

"My dad got me into hunting and we used to target shoot with .22s. Then I got into handloading and from that, I really got interested in accuracy," he said. “To shoot with any kind of accuracy handloading is a must.”

However, he really did not get interested in long-range shooting until he was invited to a benchrest competition in Burns Lake, B.C., by a friend of his.

Like F-Class, benchrest shooting is a long-distance rifle precision discipline, but instead of shooting from a prone position, competitors are seated or standing with their rifle on a table or a bench.

"I thought I was a pretty good shooter, but I had my eyes opened at that event.," Webster said.

From that moment, he was hooked. Webster starting attending and making friends with people in the long-distance shooting disciplines.

"Once they knew I was serious about learning and improving as a shooter, everyone was very helpful, he said.

Webster started by collecting a series of guns that could make him competitive.

Within a year, he had the basis of what he needed, and with two months in the shooting season to go, Webster won his first competition.

And although Webster had proven, he could be competitive, his gear was not to where he needed it.

Currently, he shoots a .284 calibre Winchester rifle, at least that how he explains the weapon to the uninitiated. The truth is his rifle bears little resemblance to its commercially available namesake.

It is a custom-made rifle, with a high power scope, handmade stock, with a Jim Borden action that weighs approximately 15-pounds.

But to truly be competitive, Webster reiterated that one has to hand load or make their own cartridges.

"There is no way a person can buy ammunition and be competitive," he said.

Webster admitted it took him about two years to learn the nuances to making his own cartridges to the standard necessary to compete at the elite level.

"But by being competitive and showing up some of the older guys started to share more information because they realize you are serious about the sport," he said.

Many of the components are available to customize and build both a competitive rifle and ammunition is available through the Neerlandia Co-op where Webster works.

"A lot of the B.C., Saskatchewan, Manitoba, competitive shooters in Western Canada get a lot of their stuff through us," Webster said.

He added he is fortunate to be sponsored by Insite Arms in Lloydminister, that build his competition rifles.

In a typical year, from May to October, every month there are two or three matches somewhere in Western Canada. Most of the time, Webster limits his travels to his home ranges in Alberta or B.C. Since there are no shooting F-Class shooting ranges in northern Alberta, he considers all of the ranges in the province his "home" range.

However, he said his favourite ranges, despite the extended travel time, are mountain ranges in B.C., such as the one in Barriere, that he competed at about a month ago, taking first place.

"You can get some funny conditions that only exist that you will never see in a wind flag ... but they are there, in the form of an air current where the pressure drops and it will drop you down," he said, adding there are ways other than wind flags to read the wind.

The size of the target varies, getting larger the further it is away from the shooter. At the longest distance 700 to 1,000 metres, the centre of the ringed target or V bull is three and a half inches in circumference.

Not having an F-Class range in northern Alberta, puts shooters like Webster at a disadvantage. The closest range being the previously mentioned Homestead Shooting Complex outside of Calgary, more than five hours away.

There is a group near Genesee, Alta who are looking into the possibility of creating a range.

"There is a lot of interest up here, so hopefully we will get a range of our own," he said.

But even if they do, Webster said northern Alberta shooters have a disadvantage when compared to those from British Columbia, due to the early onset of winter.

"There are areas, in B.C. like Barriere, where they get to shoot all year, or at worst, have two or three weeks of weather that would stop them from shooting," he said. "Which probably explains why some of the best shooters come from B.C."