Feb. 20 event was originally scheduled for Family Day weekend but was delayed due to cold weather
Mar 3, 2021 9:05 AM By: Kevin Berger 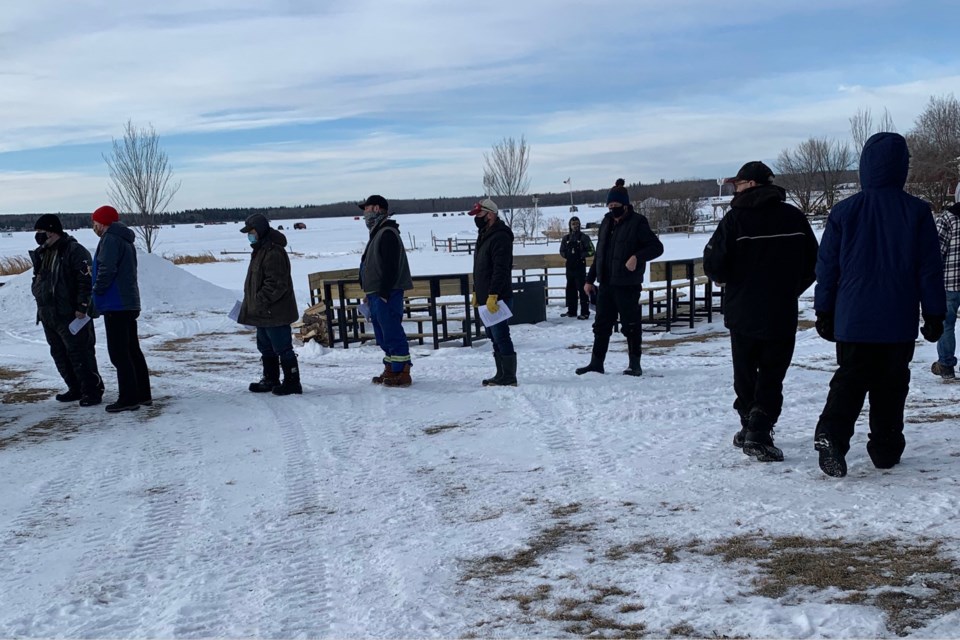 Anglers line up not far from the Lac La Nonne General Store to register for the second annual Lac La Nonne Enhancement and Protection Association (LEPA) fishing derby on Feb. 20. All participants wore masks and observed social distancing rules. More than 200 anglers signed up for the event and there were perhaps 1,000 people on the frozen lake that day.

If you happened by Lac La Nonne on Feb. 20, you would have seen long rows of fishing shacks and vehicles parked out on the lake’s frozen surface.

That was the day when the Lac La Nonne Enhancement and Protection Association (LEPA) hosted their second annual Fishing Derby, which drew out more than 200 registered anglers, many of whom were accompanied by friends and family.

LEPA member Patricia Wierenga, who contacted the Barrhead Leader to share some photos from the event, said one of the co-ordinators took their skidoo down the length of the lake to do a rough count of how many people were out there that warm spring day.

Originally the event was supposed to be held on the Family Day weekend, but it got postponed due to the extremely cold weather.

Wierenga said anglers came over from many different areas, noting she knew of one lady from Athabasca, another from Devon and another from Sherwood Park.

They also had to change the event slightly to accommodate public health restrictions; for instance, during registration, they had everyone wear masks and observe social distancing when lined up.

The winners from the derby are as follows:

Not only did LEPA manage to raise more than $4,500 from the event, but Wierenga said they also had about 50 new people sign up for membership with LEPA.

Wierenga noted that many people around Lac La Nonne buy LEPA memberships, but they also feel that anyone who is an angler or that uses the lake for recreation should be a member so they can learn more about how to maintain the lake for everyone’s enjoyment.

In an e-mail, the organizers thanked all the volunteers who set up the event and helped with the registration and raffle.

While the lack of snow and the challenges around COVID-19 have forced the cancellation of LEPA’s sled rally, they are currently looking at installing a new dock in Klondike Park Bay, as well as completing further water sampling to assess the water quality of Lac La Nonne.