Time is running out to purchase tickets in fundraiser for Barrhead Public Library
Nov 15, 2020 7:00 AM By: Kevin Berger 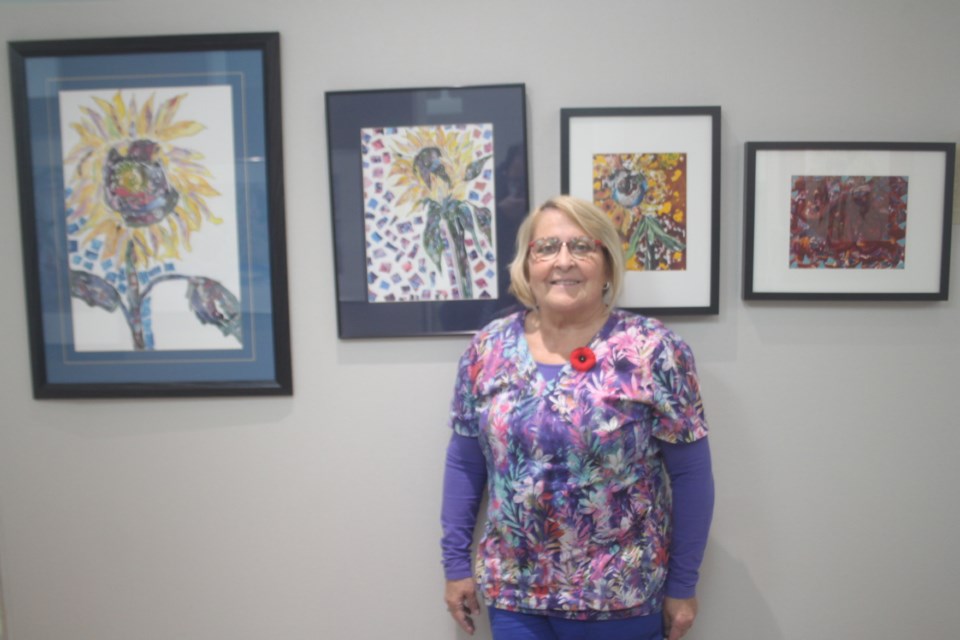 Lorna Hamilton poses with several of her paintings hanging at the Barrhead Dental Clinic, which serves as an unofficial gallery of her work with around 30 of her paintings adorning its walls. This well-known local artist has agreed to paint a landscape or a similar subject for the winner of a fundraising raffle organized on behalf of the Barrhead Public Library.

The Barrhead Public Library is raffling off the opportunity to have a painting done by Lorna Hamilton, a well-known Barrhead artist whose works hang on the walls of many local businesses.

The winner of this unique art raffle, which will be determined by a draw on Nov. 25, will be able to choose the subject of the painting, as well as the medium, upon consultation with Hamilton.

Once completed, the 28x36 artwork will be framed and put behind glass before being presented to the winner at a wine and cheese function in February.

Librarian Elaine Dickie noted that this is the Barrhead Public Library’s only major fundraiser for the year, as their normal spring and fall fundraisers are cancelled due to the COVID-19 pandemic.

Susan McLaren, who is organizing the raffle, said they have sold out of three-packs of tickets, which went for $25 each.

That just leaves single tickets for $10, which can be purchased from library staff, members of the a Barrhead Public Library board or the Friends of the Library. They are also being sold at Comfort Corner, the Barrhead Dental Clinic and Bert’s TV & Appliance.

As well, Barrhead residents can purchase the tickets through the library’s website at www.barrheadpubliclibrary.ca.

“We’re trying it as accessible as possible so people have lots of choice,” McLaren said.

Hamilton has worked at a receptionist at the Barrhead Dental Clinic for roughly 40 years and is well-known to its clients.

However, she is far more recognized for her art, which can be seen at many local businesses — the clinic itself displays about 30 of her works.

In particular, she specializes in landscapes, still life and flowers, though she also does more abstract pieces.

(Incidentally, while the subject of the painting is up to the winner of the raffle, she prefers not to paint people or animals, as her skills are still developing in that regard.)

As noted in her bio, she is deeply involved in the Barrhead Art Club, participating in numerous classes and serving as a mentor to other artists.

For her work, she has won several awards and scholarships through the Alberta Wide Art Show and has also been showcased as an Artist of the Month at the Library.

She has also appeared in many Barrhead Community Theatre productions and has sung with the Barrhead Madrigal Singers, as well as the City of Edmonton’s Da Camera Singers.

“She’s had a lot of exposure to the people around Barrhead, and I think half of the people who buy tickets just did so because of her,” McLaren joked.

In a sense, this raffle is not just serving to raising funds for the library, but also to promote this local artist and her contributions to the community.

For her part, Hamilton said she truly loves art after having studied it for decades, and she likes to promote the talented artists that live within the Barrhead area.

“If we can do something to help the community with our art, we’re happy to do that,” she said.

Restauranteur says disobeying public health restrictions make it harder for businesses to survive
May 4, 2021 11:00 AM
Comments