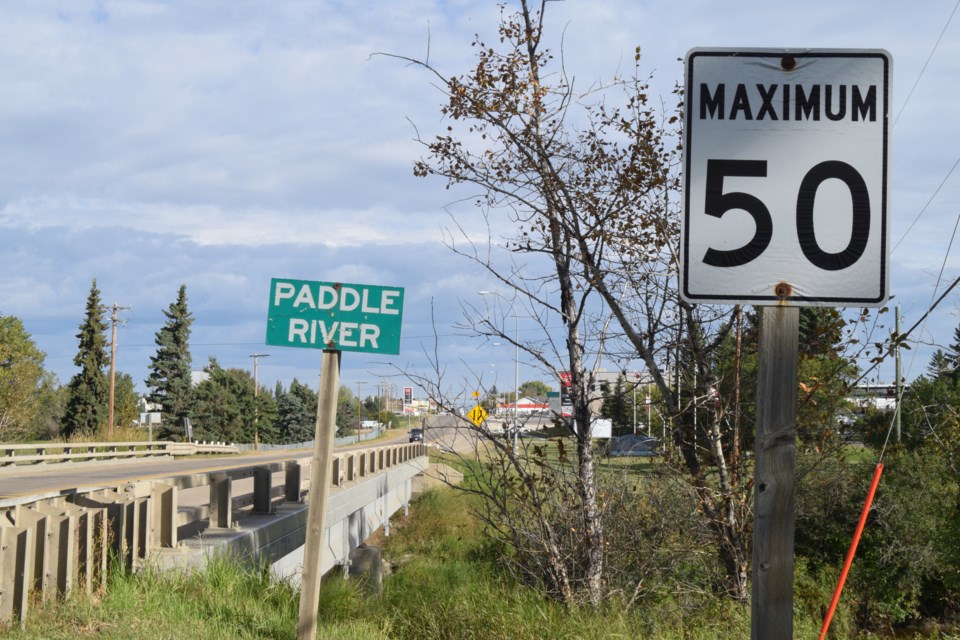 Town of Barrhead councillors are considering lowering the speed limit in residential, commercial and industrial neighbourhoods to 40 km/h from 50 km/h. The speed limits on 49th Street (Highway 33) or 53rd Avenue (Highway 18) would not be impacted as they are the jurisdiction of the province. Pictured here is the 50 km/h sign that can be seen by motorists entering into the community from the south on Highway 33. Barry Kerton/BL

BARRHEAD-Town of Barrhead councillors are considering whether or not they should reduce the residential speed limit to 40 km/h.
But before they do they want to see the impact it has had in the Town of Westlock.

At their Sept. 9 meeting, councillors instructed administration to talk to their Westlock counterparts to see what impact a 10 km/h reduction has done to improve safety.

The municipality reduced the speed limit within its borders in the summer of 2015. As part of the move council also converted the majority of its school zones to playground zones meaning the 30 km/h speed limit is in effect seven days a week, instead of just on school days.

The issue of the residential speed limit inside the community was put on the agenda at the last minute by Coun. Ty Assaf.

"Throughout the year, I get several e-mails from residents saying vehicles are 'flying' through their neighbourhoods or streets," he said. "I know a decrease of 10 kilometres [per hour] isn't going to do a lot per se but the optics of the change might make people think twice before going over 50 km/h."

Assaf then asked councillors if there was an "appetite" on council to consider a speed limit reduction, adding the first step would be to investigate the effect a 40 km/h speed limit has on other communities.

Mayor Dave McKenzie said a 10 km/h might not seem like a big reduction, but the impact it has on the survivability of vehicle versus pedestrian collision is considerable.

"They [pedistrian] have a much better chance of survival if a vehicle is travelling 30 or 40 km/h. The extra 10 km/h can have a devastating effect on the human body," he said.

That is something he told Town of Westlock administration and councillors when they were considering reducing their speed limit. At the time McKenzie was working as an Alberta Transportation safety consultant. It should be noted that he learned about the impact on speed and traffic safety during his long career with the RCMP.

"I've ran a lot of radar in my life and when you hear someone complain that they live on the race track of the community and go out there to work it, you find out it is only people's perception that they are breaking the speed limit," he said.

McKenzie added, on most Barrhead residential streets it is difficult if not impossible to drive 50 km/h without losing control.
He also noted that the municipality could only change the speed limits on residential streets as the two main thoroughfares (Highway 18 and 33) are the jurisdiction of the province.

McKenzie noted changing the speed limit also has a hefty price tag attached to it.

In addition to an education program, the municipality would have to install speed limit signs on every street coming off one of the highways.
Although he did not object to the idea of administration reaching out to their Westlock counterparts, Coun. Don Smith did not want to see them spend a lot of time or expense researching it.

"If it isn't broke, don't fix it," he said. "I've been here a long time and I haven't seen speeding in residential neighbourhoods being an issue," he said.
McKenzie said if council decides against lowering the residential speed limit there are other tools to lower motorists behaviour where speeding is an issue, using West Boundary Road and the old Manola Highway (53rd Avenue) as examples.

"If motorists know [the community peace officer] is out there doing laser work, hunting for speeders, will often remedy the situation," he said.
bkerton@barrhead.greatwest.ca