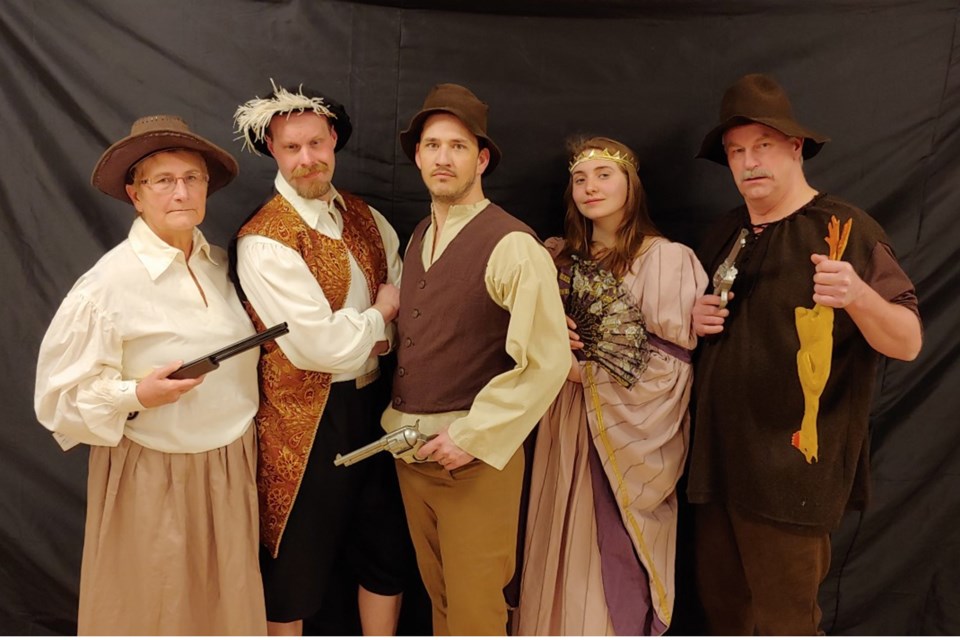 From left: From left to right: Eva Elgersma as Terrible Tilly, William Strydhorst as Noble Hart, Byron Tuininga as an outlaw, Katlyn Dening as the Duchess, Albert Mast as an outlaw. Submitted (from a dress rehersal in March)

BARRHEAD-The show must go on.

After close to a two-year hiatus, the Neerlandia Community Theatre is getting ready to entertain people once again.

On Nov. 20 and 21 as well as Nov. 27 and 28 the group will be hosting a dinner theatre production of Shakespeare Goes To Gravel Gulch at the Neerlandia Reformed Church Fellowship Hall. The tickets are $50 and all performances start at 8 p.m.

Proceeds will go to the Barrhead Pregnancy Centre (BPC).

BPC is a not-for-profit agency, located in the mall on Kowalski Drive, that provides counselling as well as other services to mothers and fathers dealing with an unexpected pregnancy.

Neerlandia Community Theatre has been hosting an annual dinner theatre production since 2012, except for 2017 and 2019. For a time, it also looked like 2020 was going to be added to that list.

Originally the curtain was slated to rise on the production in late March. Unfortunately, due to coronavirus restrictions, it had to be postponed.

Beatrice Tiemstra, who co-directs the production with Joy Wierenga, said they always knew they were going to perform the play, it was only a matter of when.

"It has been a bit of a challenge," she said.

Thankfully, theatre companies are included in the large group cohorts, similar to those in sports, so they were able to resume rehearsals, but the delay has meant that they had to recast five or six parts out a cast of about 30 actors.

They also had to change some of the details on how many audience members are allowed as well as some of the associated events around the play. Current restrictions limit the audience to 100, which shouldn't be a problem Tiemstra said as the church hall is large enough to promote physical distancing.

During intermission, the usual elaborate deserts that were available have become self-contained snacks. Theatre-goers also won't be able to treat themselves to the usual dinner that was put on before each performance.

However, patrons will be treated to a special Gravel Gulch meal at the Neerlandia Co-op Cafe.

"That is still in the planning stages right now, but it will be specific nights of the week set aside for the meal," she said.

As for what the play is about, Shakespeare Goes to Gravel Gulch also known as The Villain Drove a Bard Bargain is a comedy.

"The name mislead some people to think it was a Shakespearean work. It is not," Tiemstra said. "The play takes place in a mining town when a theatre comes in, determined that they are going to bring residents some culture. There are some outlaws involved, a robbery along with a bit of a mystery. Added to all of this, there is another group of performing artists trained to be would be mannequins who get stranded there."

County of Barrhead writes off $450,000 in taxes and penalties from three energy companies
Oct 28, 2020 9:00 AM
Comments
We welcome your feedback and encourage you to share your thoughts. We ask that you be respectful of others and their points of view, refrain from personal attacks and stay on topic. To learn about our commenting policies and how we moderate, please read our Community Guidelines.