Town of Barrhead receives the 2020 Sustainability in Collaboration Award

Municipality receives the AUMA award for its work with the Barrhead Area Regional Crime Coalition
Oct 15, 2020 11:40 AM By: Barry Kerton 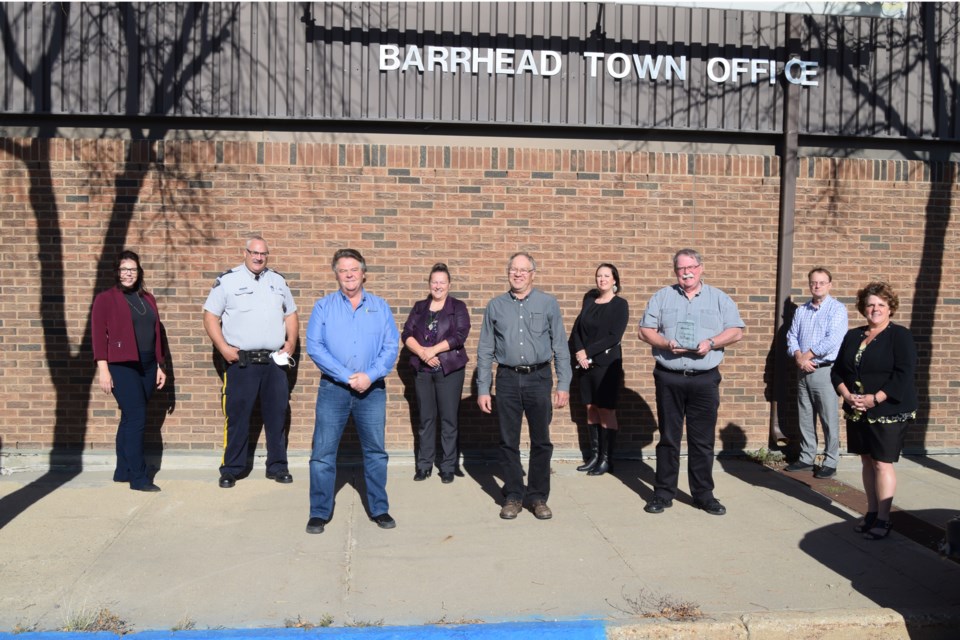 BARRHEAD-It might have been a little bit anti-climatic. On Oct. 6, in a modest ceremony, in the Town of Barrhead council chambers, the municipality was presented with its a 2020 Sustainability in Collaboration Award from the Alberta Urban Municipalities Association (AUMA).

The award is given to municipalities, which have demonstrated excellence in implementing sustainability plans and achieving measurable outcomes related to social sustainability.

It was formed in the spring of 2018, in part due to discussions Peace River-Westlock MP Arnold Viersen had with all parties in to come up with initiatives to combat rural crime.

As part of the initiative, BARCC has set up a software-based system that allows the municipalities, Rural Crime Watch and the RCMP broadcast messages via automated phone calls, e-mails, and texts, about items of public interest.

The municipality learned that they won the award through a letter from AUMA president Barry Morishita.

"The Town of Barrhead was selected for recognition of the Barrhead and Area Regional Crime Coalition for its BARCC connect system that allows municipalities and local RCMP detachments to send out accurate, real-time information from a credible source to regional residents," Morishita stated.

Unfortunately due to the coronavirus pandemic, the municipality could not receive the award in person as it was presented virtually at the AUMA virtual convention in September.

Client development director for not-for-profits director Michele Aasgard said her visit was two-fold, the first being, to present the municipality with the award, the second being to learn details about the program so that she could pass them on to other interested municipalities.

Mayor Dave McKenzie accepted the award saying it was truly a collaborative effort.

"It is a unique coalition that has been created and because of it we have been able to celebrate a lot of successes and many more will follow," he said.

County of Barrhead manager Debbie Oyarzun, as well as others involved in BARCC pointed out that the program would not have been possible if it were not for the positive relationship the municipalities and Rural Crime Watch has with the Barrhead RCMP Detachment.

"He makes it all possible," Oyarzun said, pointing specifically to Barrhead RCMP Sgt. Bob Dodds. "Having [Dodds] come on board and his ability to convince other detachments to come on board has really helped get the word out."

Town of Barrhead communications coordinator Jennifer Pederson added how Dodds and the RCMP early on in the BARCC alert systems history helped cement the program and helped get area residents on board.

In December 2018, Dodds used the system to give real-time updates on a suspect believed to have been involved in several vehicle thefts in Barrhead's downtown. Through a series of updates, Dodds asked for the public's help in locating the suspect, who by then had stolen a vehicle. The event also made Dodds a big believer in the system, especially if it is used properly.

"In large part, due to the reliable information we received, we were able to bring the event to a successful conclusion, make an arrest and no one was hurt," he said.

Two more COVID-19 cases identified in Barrhead over the weekend
Oct 26, 2020 6:01 PM
Comments
We welcome your feedback and encourage you to share your thoughts. We ask that you be respectful of others and their points of view, refrain from personal attacks and stay on topic. To learn about our commenting policies and how we moderate, please read our Community Guidelines.