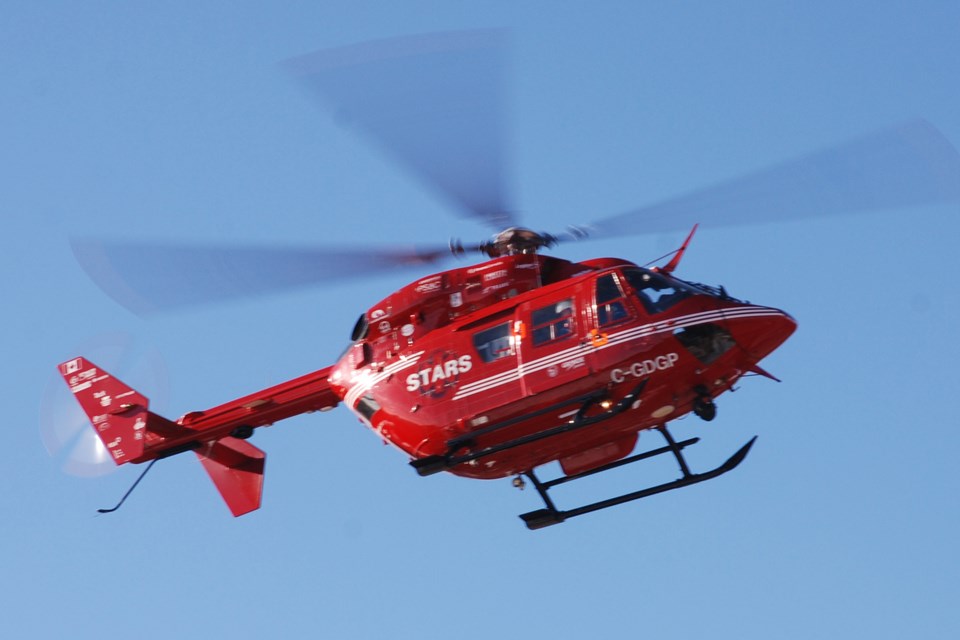 A representative with STARS Air Ambulance STARS Air Ambulance recently appeared before Woodlands County council to request the municipality renews its four-year pledge of contributing $3 per capita to the non-profit organization, which is experiencing fundraising challenges amidst the COVID-19 pandemic.

BARRHEAD-Woodlands County council will decide during budget deliberations whether or not to renew its four-year $3 per capita pledge to STARS Air Ambulance, which is facing new financial challenges due to the COVID-19 pandemic.

Councillors received a presentation from Glenda Farnden of STARS Air Ambulance during their Feb. 2 meeting. They passed a motion to accept her presentation for information and to forward her request for continued financial support on to future budget meetings.

Farnden indicated that the COVID-19 pandemic has impacted the non-profit physician-driven organization as much as anyone else.

These are stressful times, she said, and STARS has accordingly seen a rise in missions pertaining to stress-related conditions like heart attacks, strokes, drug overdoses and, of course, the novel coronavirus.

In fact, she estimated that approximately 13 to 18 per cent of STARS missions involve suspected or confirmed COVID-19 cases.

An increase in missions leads to an increase in aviation-relation costs, and like many for-profit businesses, they have been forced to downsize administration staff, she indicated.

At the same time, STARS is also experiencing a significant decrease in all types of funding.

She noted their 10-year affiliation agreement with Alberta Health Services (AHS), which provided $9.2 million in 2019 alone, has expired.

Thankfully, AHS has agreed to extend the funding agreement while it conducts the Helicopter Emergency Medical Service (HEMS) review, which began in November 2019. However, STARS is only projected to receive $7.3 million in government funding this year.

Meanwhile, revenue from STARS’ various fundraising initiatives has decreased. Calendar orders are down by more than half, and the 2020 STARS Lottery brought in approximately $1.2 million less in revenue.

Farnden added that “with COVID-19 looming around us, most of STARS’ fundraising events have all been cancelled.”

One bright spot is that they are pushing forward with the 2021 STARS Lottery, and so far ticket sales are outperforming predictions, she said.

Farnden said they are particularly grateful to municipalities like Woodlands County who represent a source of “steadfast and unwavering” support. (As noted earlier, Woodlands previously pledged to provide $3 per capita for STARS over four years, though that pledge expired at the end of 2020.)

“Your support of STARS ensures that your residents and neighbours have access to the highest level of emergency critical care, not only in Alberta but wherever your residents may travel across western Canada,” she said.

On average, STARS flies out to Woodlands County for 14 missions per year, which represents approximately $100,000 of service for county residents.

In 2020, that number was slightly down. There was one call out to Blue Ridge, seven critical inter-facility transfers originating in Whitecourt, and two calls to areas near Whitecourt.

So far in 2021, there have been two inter-facility transfers originating in Whitecourt, she said.

Farnden then spent some time discussing how STARS intends to replace its legacy fleet of BK-117 helicopters, which has served the organization for 35 years, with new H1-45 helicopters.

These new helicopters come with “breakthrough technology” that will increase safety and significantly reduce aviation-related costs as they can fly farther than the BK-117 helicopters, she said.

STARS currently has three operational H1-45 helicopters, two of which are stationed in Calgary and Saskatoon. Farnden said they have received delivery of the fourth and fifth helicopters, and are now awaiting a sixth and seventh.

Overall, the new fleet should be operational by 2022 and will feature a number of improvements, such as a handheld ultrasound device that will be especially valuable in diagnosing and treating trauma and heart patients.

Farnden said federal and provincial governments had previously been on board with the replacement fleet, but that was before the COVID-19 pandemic.

To date, $18.5 million has been raised through individual, corporate and a few municipal contributions to purchase the new helicopters, and the sale of the old units — depending on market value and the strength of the U.S. dollar — could generate roughly half of the remaining cost of the new helicopters.

The bottom line, Farnden said, is that this is a critical time for STARS and the future of emergency critical care.

“What we as Albertans do or fail to do, it will be amplified in the future,” she said.

At this point, she called on Woodlands County council to renew its four-year pledge or to consider what other municipalities have done and pass a standing motion to include a $3 per capita contribution as a line item in the annual budget.

Many municipalities have moved to such a standing motion to make it easier for administration to process and to help ensure the sustainability of STARS Air Ambulance in the future, she noted.

Coun. Ron Govenlock said that from his perspective, STARS Air Ambulance provides an invaluable service to Woodlands and their small contribution “pales in comparison” to the benefit residents receive.

However, he asked how many other municipalities actually contribute money to STARS, and wondered if there was any way to convince more of them — particularly urban municipalities — to get on board.

Farnden said roughly 90 per cent of rural municipalities contribute some amount of funding to STARS, along with 23 per cent of towns and villages and a few of the cities. Overall, this adds up to about $2 million in sustainable funding for STARS.

She suggested that STARS has been "handcuffed” in the past due to Freedom of Information and Privacy (FOIP) requirements from presenting information to urban centres relating to how many of their residents actually get assisted by STARS.

However, now that those restrictions have been relaxed, she said they hoped to present more of that information to urban centres.

Mayor John Burrows also asked if recent fuel issues at the Whitecourt Airport was posing any issues for STARS.

While she hadn’t spoken in detail with STARS pilots on the issue, she indicated that was the case, as Whitecourt is basically a “stop-off point” for the helicopters out of Grande Prairie. She couldn’t say if they had developed any kind of work-around for the problem.