The premier said the lottery will offer three prizes worth $1 million each, as well as other unspecified prizes.
Jun 14, 2021 10:15 AM By: Canadian Press 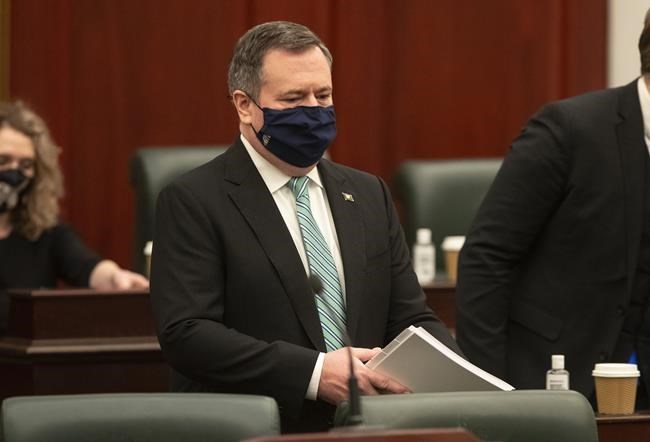 Alberta Premier Jason Kenney arrives at the 2021 budget in Edmonton on Feb. 25, 2021. Kenney unveiled details of a vaccine lottery on the weekend. THE CANADIAN PRESS/Jason Franson

EDMONTON — Alberta is launching a multimillion-dollar lottery in a bid to encourage more residents to get a COVID-19 vaccine.

Premier Jason Kenney unveiled some details of the "Open for Summer Vaccine Lottery" in a video posted to his Twitter account.

The video, shot at a mass immunization centre in Edmonton, shows Kenney lamenting the lack of crowds at the facility and opining that not enough Alberta residents are seeking protection against COVID-19.

The premier said the lottery will offer three prizes worth $1 million each, as well as other unspecified prizes.

He said the first instalment will be open to Albertans 18 or older who get at least their first dose of vaccine within a week of the day the province partially immunizes 70 per cent of the population.

He said the first grand-prize draw will take place the day the province enters Phase 3 of its pandemic recovery plan, adding more details will be announced in the coming days.

"We need to just nudge those who haven't gotten around to getting their vaccines yet," Kenney said in the video, posted Saturday.

"After all, we've had to spend billions of dollars in our health-care system and through supporting people through the past 16 tough months, so if we can just keep pushing up those numbers of people who are vaccinated, that will easily pay for itself in future savings."

As of Friday, the province said almost 69 per cent of those 12 and older had received at least one dose of vaccine. About 729,000 people have had two shots.

Alberta is not the first jurisdiction to unveil incentives to make residents roll up their sleeves for a vaccine shot. Earlier this week, Manitoba announced it would be holding two lottery draws this summer with $100,000 prizes and $25,000 youth scholarships

This report by The Canadian Press was first published June 12, 2021