All the jobs lost in 2020 among workers with wages below Canadian average: Report 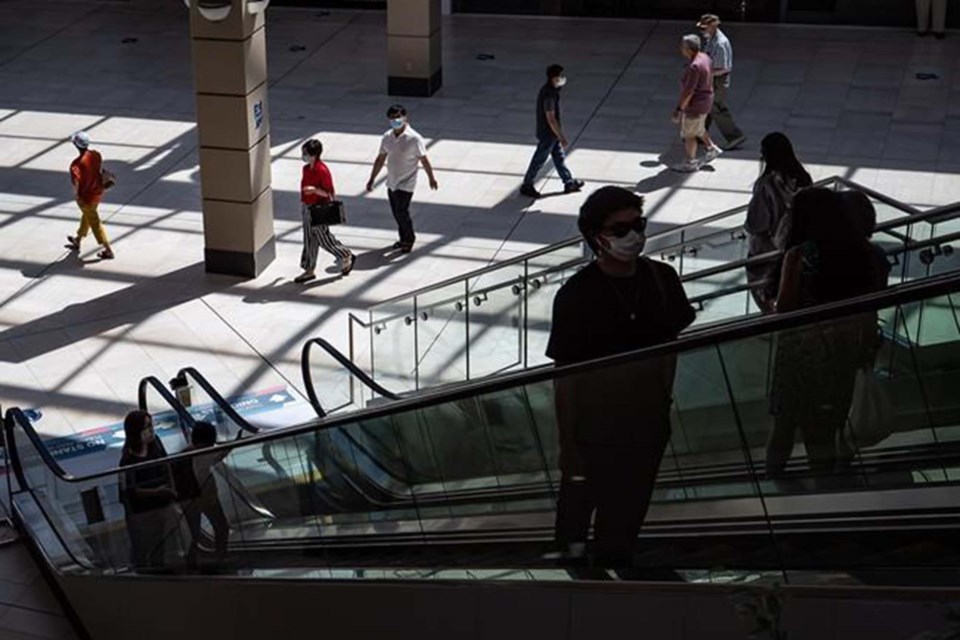 People are seen at Richmond Centre shopping mall with most wearing face masks, in Richmond, B.C., on July 20, 2020. A report by CIBC Economics, based on Statistics Canada data, shows that all the jobs lost in 2020 were among workers that earned below average wages. THE CANADIAN PRESS/Darryl Dyck

Canadians who lost their jobs due to the recession sparked by the COVID-19 pandemic all had something in common: They made $27.81 an hour or less.

But the biggest decline in work was among the country's very bottom wage earners, with an hourly wage under $13.91.

Those findings are included in a report by CIBC Economics based on Statistics Canada data that shows that all the jobs lost in 2020 were among workers who earned below average wages.

The research steps back from the monthly fluctuations of Canada's job numbers to reveal a dramatic widening of the country's income gap due to the pandemic.

"This is a very abnormal and asymmetrical crisis," Benjamin Tal, the report's author and CIBC's deputy chief economist, said in an interview. "It's a service-oriented crisis and that sector is populated by low paying jobs."

The report found that the lower the pay grade, the worse the job market performance was in 2020.

The greatest job losses were among part-timers, temporary workers and self-employed, according to the bank's report.

Yet higher-income Canadians actually experienced net job gains during the COVID-19 crisis – an anomaly during a recession, the report said.

The rise in higher-paying jobs masked the steep drop in employment among low-wage workers, according to the research.

In fact, the biggest job growth was among those at the very top of the pay scale, earning an hourly wage of $41.73 or more, CIBC said.

"The surprise here is that, not only did high-wage earners not experience job losses, but in fact they have gained almost 350,000 jobs over the past year," the report said.

Yet while top-earning jobs grew, the ability to spend disposable income waned.

"If you're not spending and your income is rising, your savings account becomes fatter and fatter," Tal said. "There's close to $100 billion of excess cash sitting on the sidelines."

The research underscores the uneven impact of the economic downturn and the growing gap between Canada's rich and poor.

"Every crisis is a trend accelerator and this one is no different," Tal said. "The income gap was widening before and clearly it's widened during this crisis."

He added: "This crisis exposed the vulnerability of our system, especially when it comes to the gig economy."

Yet it's possible some good could come out of the recession, including improvements to social assistance programs, Tal said.

But first the widening gap between the rich and poor could get worse.

"There is little doubt that those numbers will get worse in the coming months," the Jan. 19 report said.

Still, there is evidence to suggest the economy's recovery during the second half of 2021 could be rapid.

"There is so much pent-up demand," Tal said. "Not all the extra money will be spent but much of it will go toward the service sector, which is good news because that's exactly where we need the jobs.

"That's why we're going to see such a nice rebound in the economy."

Note to readers: This is a corrected story. A previous version said those who lost their jobs during the COVID-19 pandemic all made $27.81 a year or less. in fact, the threshold is $27.81 an hour.

WestJet to lay off undisclosed number of pilots amid labour negotiations
Mar 1, 2021 1:45 PM