City of St. Albert, Catholic school board to review naming policy in wake of Kamloops discovery

Coun. Natalie Joly said the city’s naming policy should be updated to reflect the city’s commitment to reconciliation, which could mean changing street and neighbourhood names such as Grandin.
Jun 10, 2021 10:45 AM By: Kevin Ma 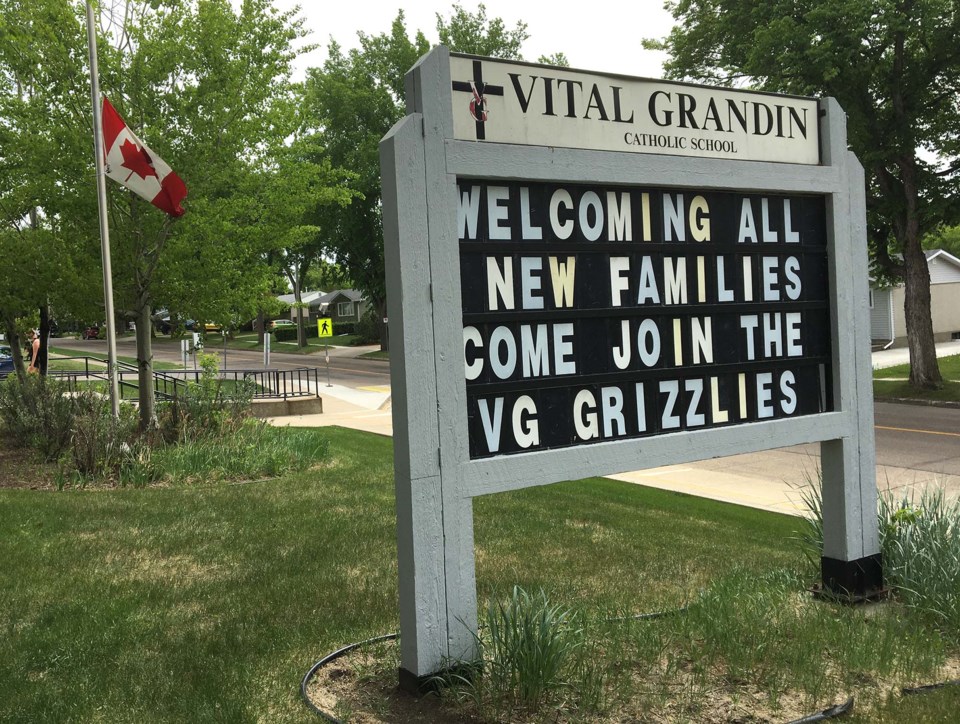 TIME FOR A CHANGE? — St. Albert school officials and councillors proposed changes to their public place naming policies May 31, 2021, in the wake of the discovery of 215 children buried in unmarked graves at a former Kamloops residential school. Community members debated whether the names of residential school advocates such as Vital Grandin should remain on public places. Shown here is Vital Grandin Catholic School, which had lowered its flag to half-mast on June 3 to honour the buried Kamloops students. KEVIN MA/St. Albert Gazette

St. Albert councillors and school trustees made moves this week to rethink policies that had named public places after residential school advocates.

St. Albert Coun. Natalie Joly tabled a notice of motion during the May 31 city council meeting to have administration prepare a business case for the 2022 budget to revise the city’s Municipal Naming Policy and Significant Names List to account for the city’s commitments under the Payhonin Reconciliation Report and other documents.

Greater St. Albert Catholic trustees also voted that day to strike an ad-hoc committee to review the names of all division schools.

In St. Albert, many of those calls revolved around Vital-Justin Grandin, the namesake of the Grandin neighbourhood, Grandin Place, Grandin Road, Grandin Lane, and Vital Grandin Catholic School.

Grandin and the schools

Grandin was the first bishop of St. Albert and an important figure in the community’s history.

He was also an enthusiastic advocate for residential schools, having three such institutions in his diocese.

The Truth and Reconciliation Commission noted that Grandin “was convinced that Aboriginal people faced extinction” unless they could be converted to Christian farmers, and believed the solution was to put Indigenous youths through boarding schools from ages five to 21.

“He boasted that the orphans educated at mission schools hated to be reminded of their Aboriginal ancestry,” the commission found, and that he could “redeem the Aboriginal race on the Prairies” if he had just 10 such schools.

“When (Indigenous students) leave our Missions they are no more Indians, being able to become good citizens, earn their own living by their work, and be useful to their country,” Grandin wrote in an 1880 public letter, adding that “it would be a great step towards civilization” if he could have a thousand such students.

Grandin personally lobbied the federal government and then-prime minister Sir John A. Macdonald to create residential schools, and shaped the government’s decision to fund a national network of church-run industrial schools, the commission found — a school network within which the commission estimates some 4,100 Indigenous students died.

The City of Edmonton voted unanimously June 7 to remove all city references to Bishop Vital Grandin, including from the Grandin LRT Station downtown, in response to the Kamloops discovery. A mural of Grandin at the station was also to be covered with orange.

Joly and Greater St. Albert Catholic board chair Noreen Radford both said their motions had been in the works for months, but acknowledged the Kamloops discovery prompted them to bring them forward.

Joly said she raised issues with the city’s naming policy back in April and noted that the city had to more or less ignore the policy to give its new park-and-ride its Cree name of Nakî.

When the city names something after someone, that someone should reflect the city’s values, Joly said. Now that we know of what Grandin’s promotion of residential schools did, we need to reconsider honouring him on our streets and schools.

Joly said the city’s naming policy should be updated to reflect the city’s commitment to reconciliation, which could mean changing street and neighbourhood names such as Grandin.

“I’m pretty sure if we had a ‘(Joseph) Stalin High School’ we’d be OK with changing that name,” she quipped.

Radford said the school board's move began when residents started questioning the appropriateness of certain school names, such as Morinville Community High School. The new ad-hoc committee will re-examine the board’s school names and naming policy and report back with recommendations by Aug. 31.

“Our board is committed to addressing this,” she said.

Joly and Radford emphasized that any name changes should happen only after extensive consultation with St. Albert’s Indigenous and Francophone communities.

Residential school survivors reached by The Gazette had mixed reactions to striking Grandin’s name off landmarks.

Myrtle Calahaisen, an Edmonton resident and former student of the Edmonton Indian Residential School (which once stood on the Poundmaker’s Lodge grounds), said she wouldn’t mind seeing Grandin’s name replaced with that of a famous Indigenous Canadian so her children would learn more about their history.

One St. Albert residential school survivor, who requested anonymity due to the controversial nature of this topic, said in a text message that tributes to Grandin should be left in place, as he was an important part of the city’s history. However, those tributes should be accompanied by plaques describing the number of children who went to and died in residential schools under his leadership.

“What has to be done is the true history has to be told,” she wrote.

Joly’s motion is set to be debated at council June 21.

About the Author: Kevin Ma

A for Quebec, F for Alberta: Study rates Canadian governments on conservation
Jun 22, 2021 11:45 AM
Comments