Sales of medications to treat cancer have nearly tripled in Canada over the past decade, reaching $3.9 billion last year, a report by a federal agency says.
Oct 31, 2020 8:15 AM By: Canadian Press 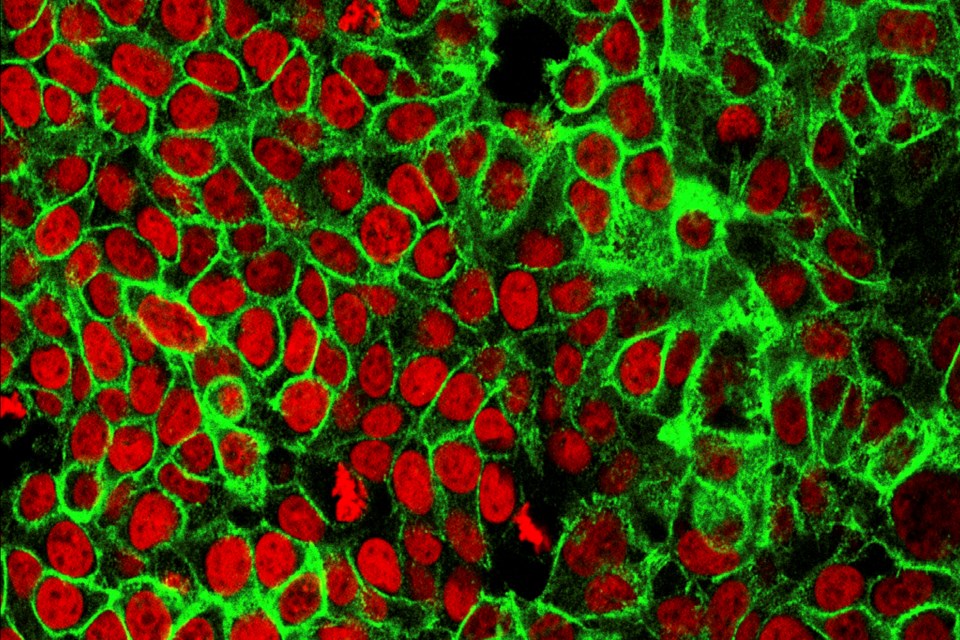 This microscope image made available by the National Cancer Institute Center for Cancer Research in 2015 shows human colon cancer cells with the nuclei stained red. Sales of medications to treat cancer have nearly tripled in Canada over the past decade, reaching $3.9 billion last year, a report by a federal agency says. THE CANADIAN PRESS/HO, AP, NCI Center for Cancer Research

Sales of medications to treat cancer have nearly tripled in Canada over the past decade, reaching $3.9 billion last year, a report by a federal agency says.

The Patented Medicine Prices Review Board has released data showing cancer medications account for about 15 per cent of all spending on pharmaceuticals.

"In 2019, medicines with 28-day treatment costs exceeding $7,500 made up 43 per cent of private plan oncology drug costs, compared with 17 per cent in 2010," says the report by the board, which aims to protect consumers by ensuring manufacturers aren't charging excessive prices for patented medications.

It says growth in the Canadian oncology market last year exceeded that of other countries including the United States and Switzerland, with a 20 per cent increase over sales from 2018.

Sales of oral cancer medications account for half of all oncology sales in Canada, up from 37 per cent in 2010, the report says, adding that while intravenous chemotherapy is publicly funded in all provinces, reimbursement of oral drugs differs across the country.

Steve Morgan, a professor in the School of Population and Public Health at the University of British Columbia, said it doesn't make sense to cover the cost of intravenous chemotherapy in hospitals and not medications prescribed to patients outside of those facilities, but that's justified in a country without a national drug plan.

"This is one of the messy bits of the Canadian health-care system," he said, adding there's a patchwork system of coverage across jurisdictions, with cancer agencies in some provinces providing limited payment for at-home oncology treatments.

A national pharmacare plan would allow Canada to negotiate better drug prices, Morgan said, noting it's the only country in the world with a universal health-care system without coverage for prescription drugs.

Much of the national-level negotiating countries do with manufacturers happens in secret, Morgan said, starting with a list or sticker price, much like buying a vehicle at a dealership, as part of a complicated regime involving rebates to bring down prices.

"It's deliberately made to cloud the real transaction price, the real price to health the system, so that no country can look at it and say, 'hey, wait a second, I heard that the people in Australia got this amazing new price on this drug.'"

"What we can't know is exactly which countries are getting the most value for money because we don't get to see their secret deals. We do know that Canada's list prices are among the highest in the world, and even above the level that the (Patented Medicine Prices Review Board) would like to see in terms of just the beginning of negotiations," Morgan said.

Countries with universal single-payer systems for medications, including Norway, Sweden, the United Kingdom, Australia and New Zealand are likely using their negotiating power to get better prices from manufacturers asking for unreasonable amounts of money, he said.

However, provinces negotiate with manufacturers individually and should not "cave" to requests for unreasonable prices, Morgan said.

"They cannot, in essence, have patients being used as hostages."

Results of an online survey released Thursday by the Angus Reid Institute say 26 per cent of Canadians had to pay for at least half of their prescription drug costs over the past year. That rises to 37 per cent for households earning less than $50,000 annually.

It was done between Oct. 13 and 18 included a representative randomized sample of 1,936 Canadians who are members of the Angus Reid Forum. A probability sample of this size would carry a margin of error of plus or minus 2.2  percentage points, 19 times out of 20.

Canada is expected to have about 225,000 new cancer cases and 83,000 deaths from the disease this year alone, the report by the Patented Medicine Prices Review Board says.

This report by The Canadian Press was first published Oct. 29, 2020.

Summer vaccination expected to be available for most Albertans: Kenney
Dec 3, 2020 11:45 AM

Suncor Energy increases spending, oil production guidance for 2021
Dec 2, 2020 3:15 PM
Comments
We welcome your feedback and encourage you to share your thoughts. We ask that you be respectful of others and their points of view, refrain from personal attacks and stay on topic. To learn about our commenting policies and how we moderate, please read our Community Guidelines.