A national strategy to fight anti-Muslim hate across society is one of 61 recommendations released Monday by the National Council of Canadian Muslims ahead of a summit on Islamophobia to be held later this week.
Jul 20, 2021 3:45 PM By: Sidhartha Banerjee, The Canadian Press 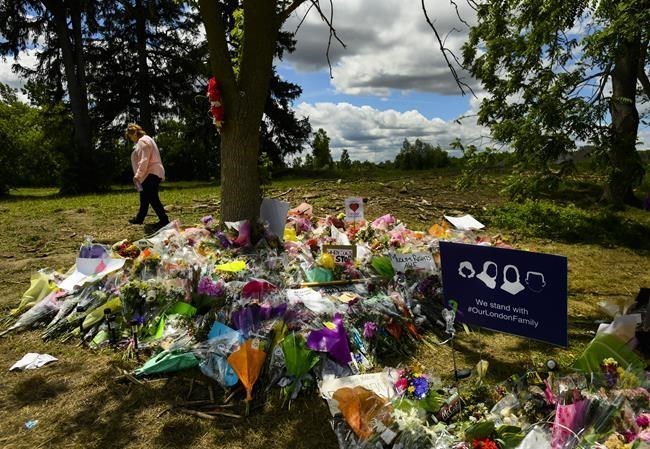 A national strategy to fight anti-Muslim hate across society is one of 61 recommendations released Monday by the National Council of Canadian Muslims ahead of a summit on Islamophobia to be held later this week.

The organization hosted events on Monday in cities that have experienced crimes targeting Muslims in recent years, including Quebec City, the Greater Toronto Area, Edmonton and London, Ont., where last month four members of a family were killed while out for a walk. It used the events to unveil its 61 recommendations for policymakers ahead of Thursday's national summit, a virtual event.

Mustafa Farooq, chief executive officer of the NCCM, told reporters in southwestern Ontario the recommendations target every level of government and were compiled following consultations with members of the Muslim community across the country.

“We need to see action and we need to see it now,” Farooq said. “Governments attending the summit must know that we want more than their attendance, we want to see their commitment to timelines.”

More than half of the recommendations are directed toward the federal government and include the creation of a strategy to fight Islamophobia within the civil service and the wider Canadian society. The group suggested Ottawa create a special envoy to deal with Islamophobia and to investigate alleged profiling within the Canada Revenue Agency and national security agencies, Farooq said.

Other recommendations consist of amending the Criminal Code to include specific penalties and dedicated prosecutors for hate crimes involving assault, threats, mischief and murder. The group also wants the government to no longer require the attorney general's consent before hate-based and genocide cases are prosecuted.

For provinces, the recommendations include teaching about Islamophobia in schools, an accountability system for police hate-crimes units and the prohibition of white supremacist rallies.

In Quebec City, the announcement took place outside the Islamic Cultural Centre, the site of a deadly shooting in January 2017 that left six men dead and others seriously injured. "The reality is Canada has suffered more mass killings in the past five years than any other country in the G7,” Farooq said. “This cannot be allowed to continue.”

Nusaiba Al-Azem, second vice-chair of the London Muslim Mosque, said the summit shouldn't be seen by politicians as a one-off. “As we stand here a few days before the summit to take place, we want to use this opportunity to remind our elected officials that this summit is not, should not and cannot be the end,” Al-Azem said.

“It's simply a means from which we expect tangible change to take place at all levels of government.”

Of the 61 recommendations, Al-Azem highlighted one calling on the attorney general to intervene in all challenges to Quebec's secularism law, known as Bill 21. The law, adopted in June 2019, prohibits public sector workers who are deemed to be in positions of authority, including teachers, police officers and judges, from wearing religious symbols at work. It makes pre-emptive use of the Charter of Rights and Freedoms' notwithstanding clause, which shields legislation from court challenges over violations of fundamental rights.

Al-Azem said the law disproportionately affects Muslim women as well as Jews and Sikhs. “If I wanted to move to Quebec and work for the office of the Crown, (I) would be forced to choose between either practising my faith or my profession, (so) I feel particularly strong about Bill 21, a law that in the year 2021, polices and regulates women’s attire, religious freedom and our freedom of expression," she said.

The summit Thursday of community and political leaders, academics and activists is one of two this week aimed at fighting hate crimes. A similar virtual meeting on anti-Semitism is scheduled to take place Wednesday. “The reality is that attacks on racialized minorities, whether it’s attacks on Muslims, Indigenous folks, Black folks, Sikh folks, Jewish folks, it implicates all of us as Canadians,” Farooq said.

A spokeswoman for Diversity and Inclusion Minister Bardish Chagger said Monday the government will work directly with organizations like the council and takes it recommendations seriously.

"I can tell you that our government hears the Muslim community loud and clear, that more action needs to be taken to protect Muslim communities against hate and discrimination fueled by Islamophobia," said press secretary Aidan Strickland. "We take all recommendations seriously, and will remain committed to listening to the communities with lived experiences to inform our actions to create a diverse and consciously more inclusive Canada for all."

Calls for the Islamophobia summit came after Madiha Salman, 44, her husband, Salman Afzaal, 46, their 15-year-old daughter Yumna Salman and Afzaal's 74-year-old mother, Talat Afzaal, were run down by a driver in London, Ont., in June. The couple's nine-year-old son, Fayez, was seriously injured in the attack.

“Real change is the true and only measure of success and accountability of this summit," Al-Azem said. "So that we can all collectively ensure that no other community will ever have to open its doors to tens of thousands of mourners like we did here in London on June 8."