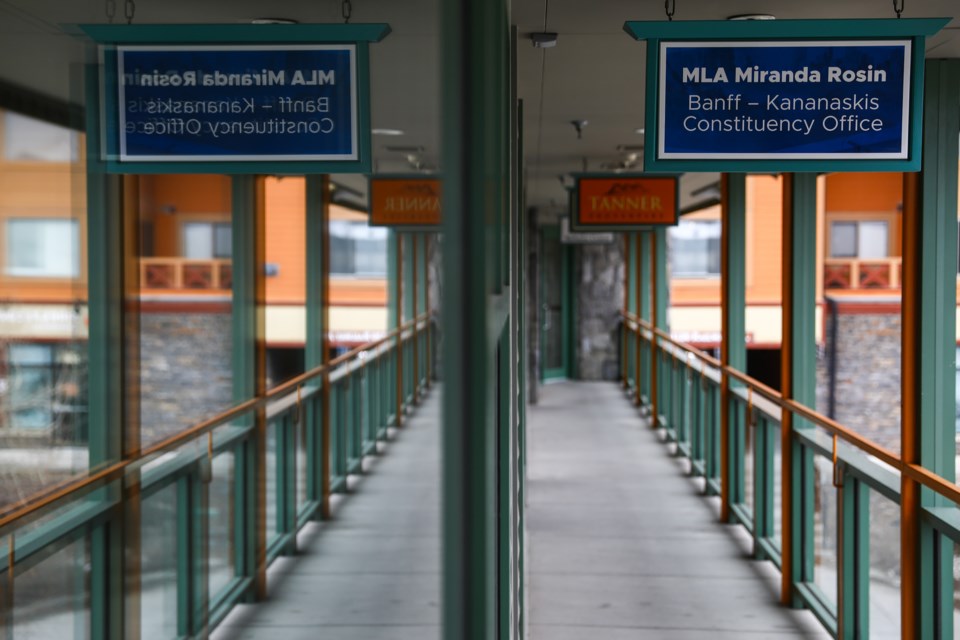 BOW VALLEY – Banff’s elected officials have joined forces with their counterparts in Canmore to voice concern and disappointment with Banff-Kananaskis MLA Miranda Rosin speaking out against COVID-19 public health restrictions.

Only days after Rosin was one of 16 UCP MLA’s to oppose the public health restrictions, Canmore council wrote to Rosin asking her to reconsider her position given rapidly riding case counts locally and in the province.

Banff Mayor Karen Sorensen echoed some of Canmore Mayor John Borrowman’s concerns and wrote a letter in which she asks Rosin to "avoid words and actions that undermine the public health messages to our population" and urged the MLA to encourage everyone to follow all health restrictions and requirements needed to get Alberta and Banff back to safety.

“This council is supportive of the restrictions going back in place and we support science-based decisions,” said Mayor Sorensen during a council meeting on Monday (April 12).

Mayor Sorensen said MLA Rosin indicated she was against the province moving back to Step 1 – which included a ban on indoor dining at restaurants and limiting  retail to 15 per cent capacity – based on feedback from her constituents.

“I have what I suggest is a very good relationship with MLA Rosin, and I certainly did not receive a call asking for our opinion on that,” she said in council, alter adding town council has heard from people who have expressed significant mental anguish about the dangers of their front-line work..

“I know that others too are frustrated to see ‘I consulted with my constituents,’ knowing that this part of the riding was not consulted with.”

In Banff and Lake Louise, there were 101 active cases as of April 12, including the B117 variant that originated in the United Kingdom and the P1 variant traced back to Brazil. The individuals in Banff's isolation space come from more than 25 different employers, representing a range of hospitality, tourism and trades industries. One month ago, the Banff and Lake Louise region had contained COVID-19 to three cases.

In Canmore, there were 62 active cases as of Monday.

In his letter to Rosin, Borrowman said the rapidly rising cases has the community and town council “very concerned.”

“This is particularly worrisome as we come into what is usually the busy season for our tourism-based economy,” he stated.

Canmore council wrote Rosin only days after she signed an April 7 letter with 15 other UCP MLAs calling Premier Jason Kenney’s decision “backwards,” and stating they “do not support the additional restrictions placed on Albertans” after 13 painstaking months of COVID-19 public health restrictions.

Rosin wrote in an April 7 Facebook post she had received thousands of emails and hundreds of phone calls on the concerns of citizens.

When Kenney made the April 6 announcement for further restrictions, he noted there was likely to be pushback from members of his party, adding that any debate “be informed by facts.”

Two days after the letter signed by the 16 UCP members, he said any member of the UCP caucus would be removed if they were to break the public health restrictions.

“I made it very clear to my caucus this morning that while we accept a diversity of opinions and I totally respect the obligation of members to represent their constituents,“ Kenney said. “The government caucus could not tolerate any member counselling people to engage in civil disobedience or to break public-health measures.”

Canmore council’s letter stated like Rosin, municipal elected officials have heard from residents both for and against the restrictions. However, they’ve heard considerably more that “we are not doing enough to curb the spread.”

While people throughout the world are exhausted and businesses are once again threatened, Borrowman wrote that continued support in this part of Rosin’s riding “remains strong for the restrictions advised by the chief medical officer of health.”

Canmore council ended its letter by asking Rosin to “make a determined effort to reach out to hear all perspectives in our community before taking such actions as refuting the need for continued caution in containing the virus.

“This is not a political issue, but one of public health,” the letter stated.

Banff’s letter, which has been copied to Kenney, Health Minister Tyler Shandro and chief medical officer of health Dr. Deena Hinshaw, includes a thank-you to the province for recent added efforts in the Banff region to contain an outbreak of the more contagious COVID variants, such as mobile testing teams at Sunshine and Lake Louise ski hills, and a pop-up testing trailer in the town this past weekend.

Sorensen said council is also appreciative of AHS's commitment to fast-track additional isolation facility space in Banff to add much-needed rooms as the two existing facilities are near capacity and for providing rapid test kits to local businesses.

“I think the province has been very attentive to the Bow Valley,” she said.

None of the 16 letter signees are members of Kenney’s 22-person cabinet. Though it’s not uncommon for any party member across the country to express differing opinion, the internal dissent of this size is rare at provincial and federal politics.

In Ontario, MPP Roman Baber said the January provincial lockdown was “deadlier than COVID,” he was kicked out of the Doug Ford Progressive Conservative caucus. Ford also expelled Belinda Karahalios for voting against a law to extend pandemic emergency orders, which she did because she said it gave the government too much power.

Rachel Notley, the leader of NDP opposition in Alberta, said 16 UCP members were “being irresponsible, selfish and, quite frankly, they should be ashamed.”

Alberta going back to Step 1 means reduced retail capacity to 15 per cent, no indoor dining at restaurants, but patio dining, takeout and curbside pickup are allowed. Indoor gatherings are still banned and outdoor gatherings are limited to no more than 10 people.

Rosin has been outspoken when it comes to opposing public health restrictions.

A November newsletter mailed out to her constituents stated “the worst of the COVID-19 health pandemic” was over when the province was reporting record numbers of new cases.

During Christmas, she visited family in Saskatchewan when Albertans were supposed to restrict their travel because of the pandemic.

The rookie MLA declined multiple interview requests with the Outlook at the time and later confirmed to Mountain FM she had left the province, but did not breach regulations since she lives alone and was permitted to visit another household for the holidays.

She wrote a column for High Country News that questioned the public health impacts of restrictions for COVID-19, saying many western societies “gambled away their longstanding values of freedom and self-determination in surrender to fear and uncertainty” and surrendered their personal freedoms to the government.

A Facebook post earlier in the year was also critical of the economic impacts to the province's attempts to curb the novel coronavirus’ spread.

Rosin was the deputy chair of the select special Public Health Act review committee that made recommendations for the province to consider last year for amendments to the act.