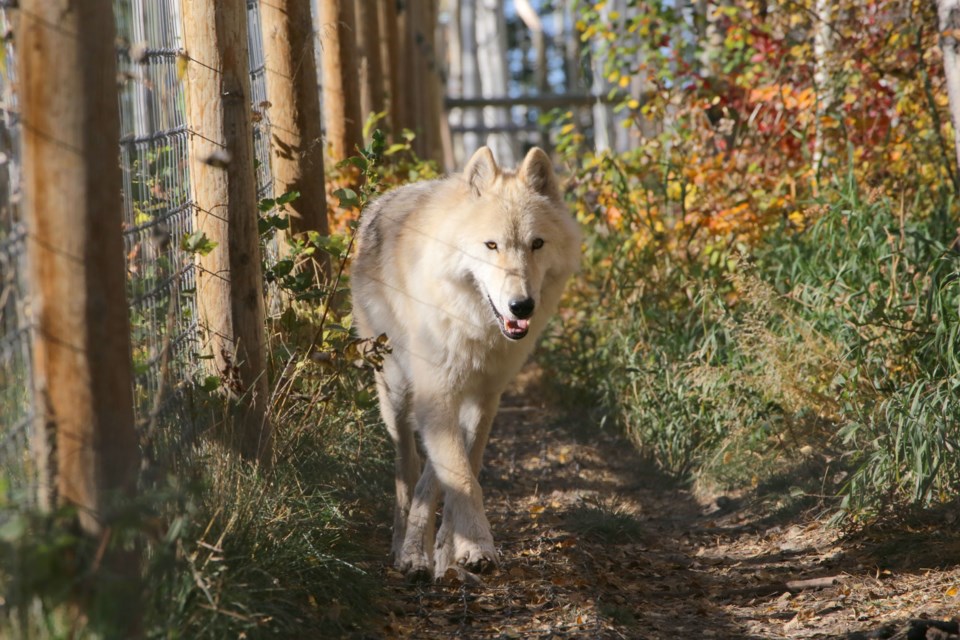 One of the longtime residents of the sanctuary, the wolfdog TK, paces down the length of its enclosure. (Tyler Klinkhammer/The Cochrane Eagle)

COCHRANE-- The Yamnuska Wolfdog Sanctuary is encouraging the public to come out and celebrate its 10-year anniversary on July 24 and 25 with a host of activities, food trucks and of course, wolfdogs.

“It’s pretty crazy to think that this place has been here for 10 years. It’s grown at such a rapid rate, it’s been really, really cool,” said Alyx Harris, operations manager with the Yamnuska Wolfdog Sanctuary.

The sanctuary launched 10 years ago at a location slightly more west than the current facility on Range Road 53.

It began when director Georgina de Caigny adopted her own wolfdog and realized the animals are quite unlike their domestic canine counterparts.

When she realized how different wolfdogs were from traditional domestic dogs, she was faced with a decision— Either give up her wolfdog or completely change her life to accommodate the animal and its significant needs.

Shortly after that, de Caigny began the Yamnuska Wolfdog Sanctuary, accepted the first rescue and more animals quickly followed. It was not long before she realized she would need more space and new facilities to give the wolfdogs a proper home, and to educate the public on the nature of these complex canines.

Ten years later, the Yamnuska Wolfdog Sanctuary is home to 35 wolfdogs, and offers interactive tours and educational programming to shine a light on these unique and often misunderstood animals.

“We have continued to expand, rescue more wolfdogs, have more permanent wolfdogs and even expand our educational programs,” Harris said. “It’s been pretty crazy to have such growth in such a short amount of time.”

To celebrate the 10 years of operation the sanctuary will be having a day of regular tours, along with additional programming including goat yoga, a wolfdog drawing class hosted by local artist Ashley Gaboury, a pop-up market and food trucks on location.

There will also be an after-hours event where the public will be able to observe the wolfdog residents of the shelter during their most active hours from 5:30 to 8 p.m.

The Yamnuska Wolfdog Sanctuary recently completed the construction of three new enclosures for 10 new dogs that came to the shelter last October.

They spent the winter in temporary shelters away from the public, but are now in their permanent enclosures.

“They are loving the large space,” Harris said. “Moving them into their large enclosures we’ve seen their confidence boost, and they just seem so much more relaxed with having more space. They get to explore and all of that fun stuff. They’re doing really, really well.”

Although not all of the dogs are viewable by the public, it is a great opportunity for the visitors to catch a glimpse of some of the newest residents of the sanctuary.

Tickets for the event are available online at yamnuskawolfdogsanctuary.com/.

About the Author: Tyler Klinkhammer