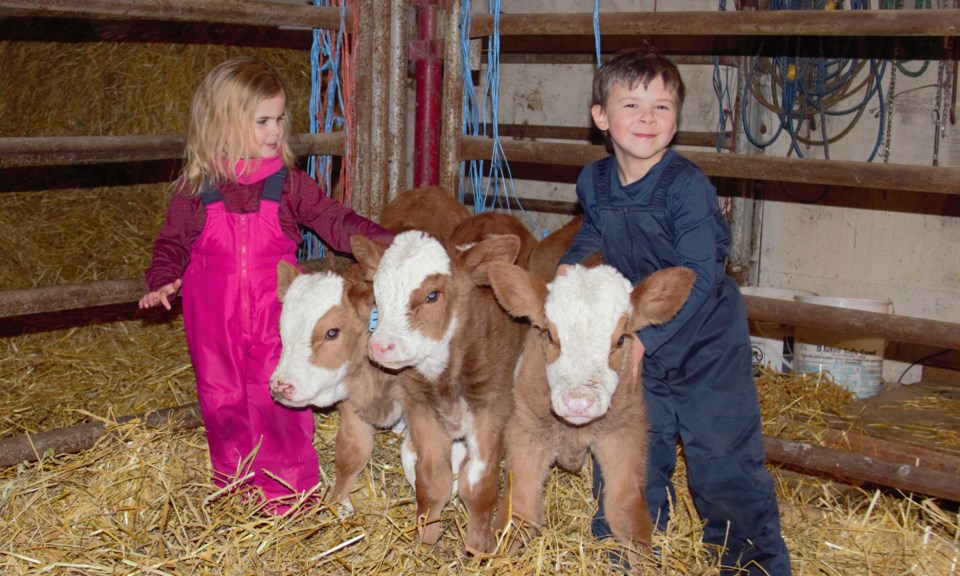 Elizabeth Brown, 3, and Carter Brown, 5, with the first-ever set of triplets born at Lone Stone Farms north of Westlock Dec. 29.

WESTLOCK - Calving time on any farm is interesting because of the unknown, and also worrisome because of potential problems. Will it be a bull calf or a heifer? What colour will it be (not always a concern). Will there be problems like a backwards calf, a calf too large  or other problems in which a cow may need assistance.

Lone Stone Farms north of Westlock are calving 300 head of cows this year; half of them Simmental and half Red Angus. They schedule their calving to start in early January, with a warm barn next to the pen where cows are expected to calve, and brought in either just before or after they have calved.

Karen Brown said that on Dec. 29 Hetty 38D, a four-year-old polled fullblood. had a calf about 11 a.m. Nathan Brown put the cow and calf into the barn to give the cow a chance to mother up to her newborn. At around 4 p.m., she was checking the camera in the barn, and noticed not one, but three calves surrounding the cow.

“I said, ‘Nathan, how many calves did you put in the back?’ He said one,” Karen said.

They immediately went to investigate, and yes, there were two more wet, just-born calves — one female and two males. All over 60 pounds weight, and born unassisted.

The farm has been in the family for over 100 years, and as far as Karen knows, cattle have always been a part of the farm.

“We’ve never had triplets ever born on this farm,” Karen said, “Even when my dad (the late Evan Roberts) was here.”

Karen added the cow didn’t look all that big, yet had over 180 pounds of calves inside. Hetty is obviously very prolific. Karen said in her first calving, she had a single calf. Last year she had twins. And this year, triplets. “I wonder if we are on a rising scale here!” she commented.

Lonnie and Karen Brown have operated Lone Stone Farms, a mixed-farming operation for over 35 years, and along with the cattle operation, have about 1,800 acres in crop each year. Their son Nathan and his wife Alisha have now become a part of Lone Stone Farms, and their two children are always excited to go out to the barn to see the new calves.