All students returning to online learning; personal services closing; no dining in
May 4, 2021 7:42 PM By: Heather Stocking 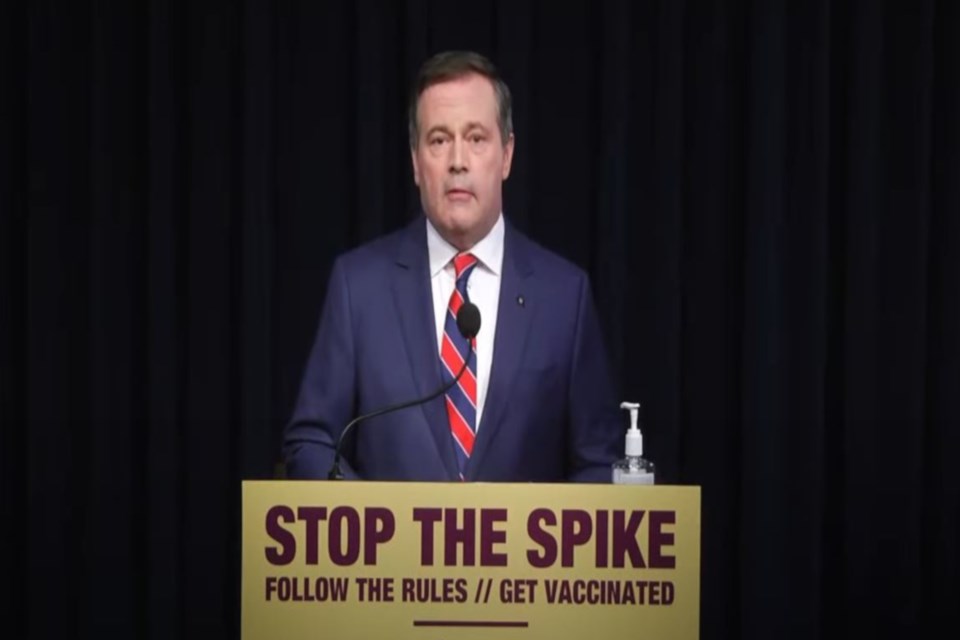 Premier Jason Kenney announced several new restrictions including a return to online learning for K-12 students, no in-person dining and an increase in fines for not following health mandates.Government of Alberta

ATHABASCA - The Government of Alberta announced last week it was bringing back measures it put in place over a year ago to try and stop the rise in COVID-19 cases.

Premier Jason Kenney made the announcement May 4, saying 150 out of the province's 226 ICU beds are filled by COVID patients, adding Alberta Health Services (AHS) is making plans to expand to 425 beds if needed.

"If pressed, we can open as many as 425 ICU beds,” he said. “But — this is a big but — that would require mass cancellations of surgeries and other care that people are counting on."

He noted over 65 per cent of Albertans over the age of 50 have had at least one dose of vaccine and urged everyone else to book an appointment for their first dose as soon as possible.

“The disease continues to spread at an alarming rate, especially among younger people,” said Kenney. “We must not, and we will not force our doctors and nurses to decide who gets care and who doesn’t, and that is why we must act now to stop the spike.”

Starting May 7, K-12 and post-secondary students returned to online learning until May 25; outside gatherings are now limited to five people; places of worship are allowed up to 15 people; and funerals go back to 10 people from 20.

“Effective at 11:59 p.m. on this coming Sunday, May 9, personal and wellness services including

Ryan Hamzeh, owner of the Neighbours Pub in Athabasca, had just been approved by the town to have a patio.

“We were supposed to start building (May 5),” Hamzeh said.

He’s frustrated by the turn of events — again — because he has been following the rules and doing contact tracing, but he’s not responsible for what people do outside his restaurant.

He added there has been a lot of community support through every phase of locking down and reopening however.

During his announcement, the premier also added workplaces with outbreaks will be mandated to close for 10 days, with exemptions only for critical services, and all businesses must limit customers to 15 per cent of fire code capacity, or five customers.

“Health, social and professional services like massage therapy, physicians and dentists, accountants and lawyers will remain available, but by appointment only,” he said.

“And we are introducing a tougher enforcement protocol for repeat offenders because we will not tolerate those who endanger the health of their fellow Albertans while the vast majority of people are doing the right thing,” said Kenney.

The tougher enforcement measures were put into practice the following day when RCMP and AHS health inspectors went to the Whistle Stop Café in Mirror, AB, changed the locks and took control of the building.

On May 6, AHS issued a media release stating they had received a court injunction against illegal gatherings and rallies, specifically naming Christopher Scott, the owner of the Whistle Stop Cafe, Whistle Stop (2012) LTD., Glen Carritt, a former Innisfail town councillor who resigned in January after being confronted by other council members regarding his support of a local business actively defying provincial COVID restrictions.

“The action today also sought and received a court order against all other organizers of advertised illegal gatherings and rallies breaching COVID-19 public health orders,” the release said. “AHS has taken this step due to the ongoing risk to Albertans created by those breaching COVID-19 public health restrictions and advertising social gatherings which, if held, breach current and active CMOH (chief medical officer of health) orders and pose a risk to public health.”

Kenney ended the announcement saying those who can must work from home for the next three weeks.

More information can be found on the Government of Alberta website.

Additional COVID-related death reported in County of Barrhead
May 10, 2021 7:00 PM