Businesses need to be recognized even more now for their hard work
Jul 31, 2020 11:27 AM By: Heather Stocking 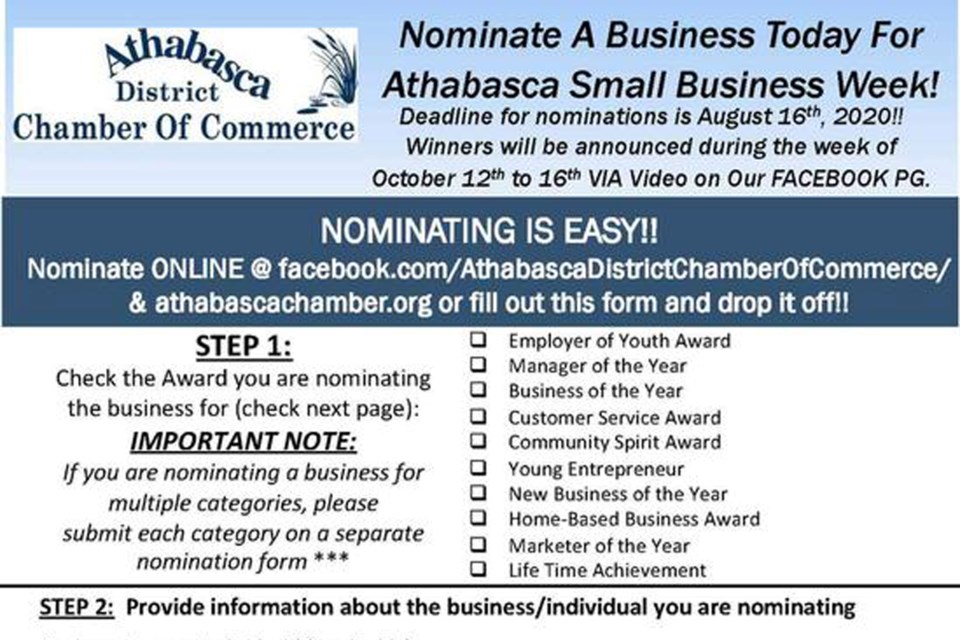 The Athabasca District Chamber of Commerce is accepting nominations for their award gala which will now take an online format due to the pandemic.

ATHABASCA – For eight years the Athabasca District Chamber of Commerce has hosted a gala event for members with entertainment, food, drinks, mingling and awards for local businesses, but not this year – at least not like before.

As the world comes to terms with learning how to live in a pandemic world and creative ideas are producing unique solutions to maintain physical distancing the Chamber has decided to do their upcoming award ceremony online said president Tova Schwede.

Schwede said a lot of discussion has gone into make the decision to switch to an online awards ceremony or cancelling it altogether. The gala was always well attended by business owners, their families and staff as a night to celebrate each other.

“We did not want to forego the awards; we wanted to keep the awards momentum. It was actually a very big deal with the dinner; with linens and caterers and all of that. And the decision was made that we're not going to risk it. We're just going to turn this into something else,” said Schwede.

Now that the decision has been made nomination forms are available and anyone can nominate a business, including businesses nominating themselves.

“What we're doing is, and we've done this in the past, is we do the nominations via Survey Monkey. There is a link on our Facebook page. There's also a link on our website,” Schwede said.

The forms can then be dropped off at Home Hardware in Athabasca, or scanned to email and sent to the Chamber executive assistant Jenn Oba (info@athabascachamber.org) for collection.

"The last couple of years we've started using Survey Monkey and we actually get way more nominations, and they're also easier to read,” said Schwede.

As to how the online version will look, that is still to be decided Schwede said, adding it may include a mix of pre-recorded videos and live streaming, but the decision will be made in August.

The link to the nomination form can be found at http://www.athabascachamber.org/ or their Facebook page.