There have now been 12 confirmed cases within the borders of Athabasca County — four of those are active
Sep 9, 2020 4:50 PM By: Town And Country Today Staff 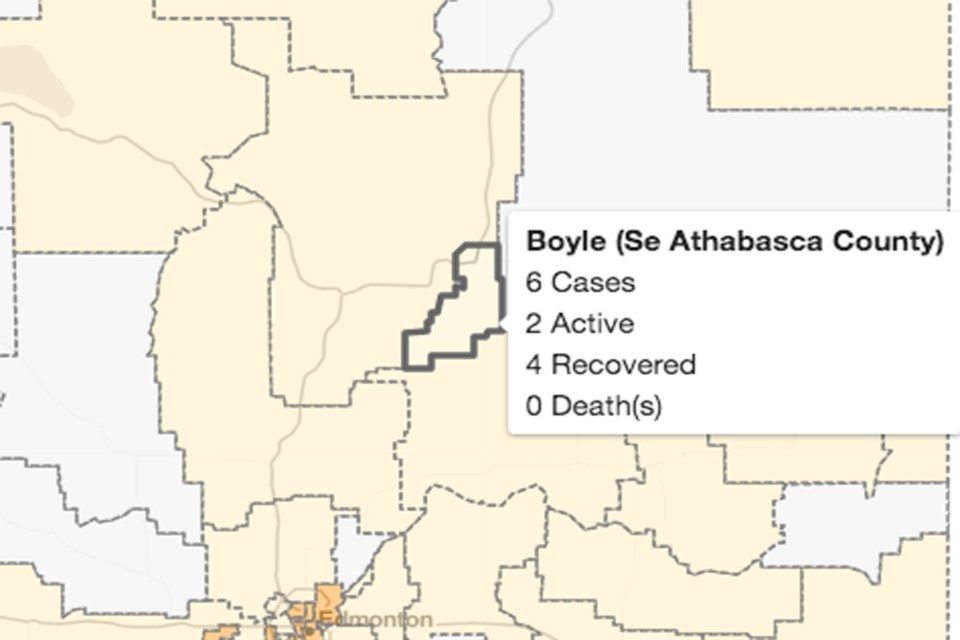 There are now four active cases of COVID-19 within the borders of Athabasca County, two of which are in the Boyle area. There have also been four recoveries in each of the two areas.

BOYLE - There have now been as many confirmed cases of COVID-19, and recoveries, in or around the Village of Boyle as there have been in the rest of Athabasca County.

The village and the county now have two active cases each, along with four recoveries each — a total of four active cases altogether, and 12 since the start of the pandemic.

The Government of Alberta's geospatial map indicated one more positive case in the Boyle region Sept. 9, putting the area on par with the number of cases confirmed in the rest of Athabasca County. Boyle is located in the southeast corner of the county, but is an independent municipality, so cases within the village and surrounding area are separated on the map, but are included as a part of the county's total numbers. The Town of Athabasca does not have its own tally and there is no way to tell the exact location of the positive cases.

Alberta's chief medical officer of health Dr. Deena Hinshaw reported 98 new cases Wednesday, but the total number of active cases was down to 1,585, from 1,692 the day before.

With cases inside schools being reported around the province, Hinshaw also announced the launch of a new school status map tool that will track and report every school in the province that has confirmed two or more cases, in a 14-day period, where the virus could have been acquired or transmitted within the school. The map will also indicate when the outbreak is complete, following 28 consecutive days with no new confirmed cases.

The currently reported cases in Alberta schools have all been acquired outside the schools, she said.

"So far, none of the 16 schools that AHS has reported to us have met that threshold," Hinshaw said. "If needed in the future, the map will also list schools that have shifted into Scenario 2 or 3 to protect the health of students.

"I know that some have asked why we are focusing on that number when other sites are reporting higher numbers," she said. "The answer is that we are striving to help parents best understand the risk of exposure that their children face."

Aspen View deals with two COVID cases first week of school
Sep 14, 2020 11:30 AM
Comments
We welcome your feedback and encourage you to share your thoughts. We ask that you be respectful of others and their points of view, refrain from personal attacks and stay on topic. To learn about our commenting policies and how we moderate, please read our Community Guidelines.