Some are faring better than others just days into isolation guidelines
Mar 23, 2020 1:00 PM By: Heather Stocking 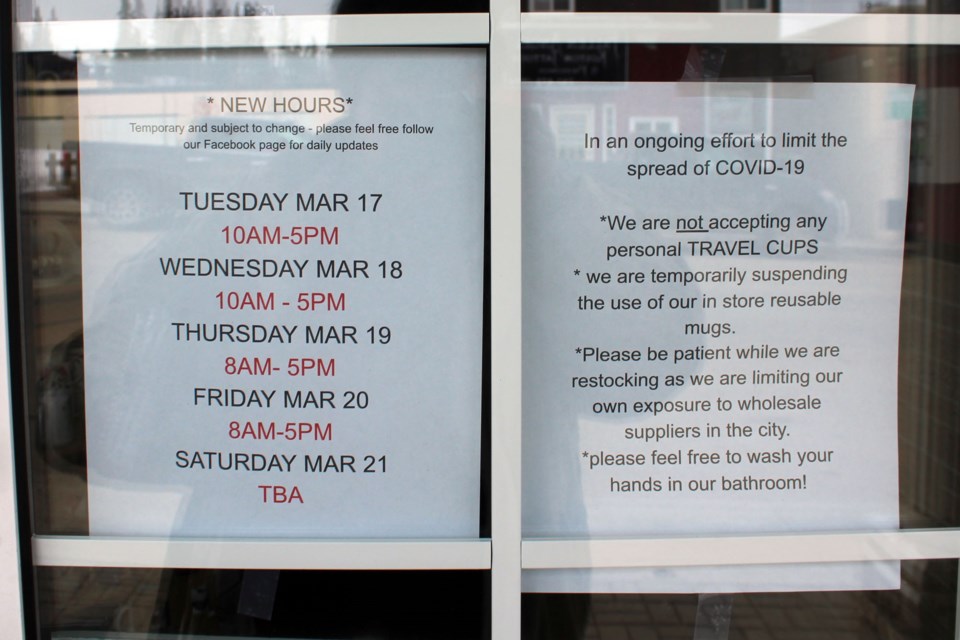 Signs, like this one at Paddymelon Gifts, Espresso & Eatery, are popping up all over town. Some signs tell of a business being completely closed. Bryan Taylor/AA
ATHABASCA, BOYLE, GRASSLAND – The impact of the COVID-19 pandemic on local businesses is already being felt across the Athabasca region.

Some stores are shutting their doors, while others are struggling to stay open. In a few instances the pandemic has had little impact or even increased business.

Less than four months after opening Glas Floral Studio in Athabasca owner Jesse Congdon has locked the door but is still accepting orders and doing deliveries.

“Every one of the events we've had except for a wedding in October have now been canceled or indefinitely postponed,” Congdon said. “May is supposed to be our busiest month with Mother's Day and then I had three events; everything's canceled.”

Congdon will try to keep her business going in other ways she said.

“We just kind of shift our focus a little bit; try to make sales a different way,” she explained. “So, just having to get really creative.”

She is trying to remain positive about the situation while watching her passion project forced to temporarily close its doors.

“The only thing that gives me any solace is that literally we're all in the same boat, no one's exempt,” Congdon said. “The public actually has been amazing through all of this. That is one thing I will say that the way people are coming together, it's very heartwarming.”

Grassland OK Tire owner Taylor Preb has also noticed a decline in customers, but wants to keep the store open as long as possible.

“We're worried but it is what it is,” he said. “We're just gonna kind of tackle it as it comes.”

For Scott Kiteley and his weeks-old business SK Distributing in Boyle, he is remaining optimistic.

“It's actually not too bad for us,” Kiteley said. “If everybody's at home they're gonna get bored and they'll start fixing things.”

People may not be coming into the store but they are still buying parts he said.

“From Day 1 it's been about the same; I haven't really noticed too much of a difference in sales,” Kiteley explained. “You get a little bit less foot traffic, but people are spending more money.”

They also offer 24-hour call out and will make appropriate arrangements if a customer needing a deliver identifies as having COVID-19.

“If somebody needed something I can come out to the store. But if I have a customer that they are confirmed (Coronavirus) or they self-isolate, I've no problem (leaving it at the door),” he said.

“It's been business as usual. If we didn't turn on the news you wouldn't know people were talking about it,” Derko stated. “It's slow today but it was like that two months ago. We get a couple busy days and a couple slow days.”

He did add that he thinks the full impact is coming.

“I would think though that by next week we'll probably start feeling the effects pretty hard,” he added. “If it's quiet then we're going to have to adjust accordingly as far as staff goes. But if they shut us down, well then who knows? I mean depending on government programs, the bills don't stop coming you know; you still have to heat the place.”

Derko chooses to remain optimistic as well, noting it’s a good time to retreat to the great outdoors.

“I've been trying to find the good in it as well like with the power sports and stuff. A lot of people are off right now with nothing to do and just wanting to get away,” he said. “You get out in the bush or get out on the trail and then it's almost like self-isolating in Mother Nature.”

One business that has seen an increase is Athabasca Health Foods owner Beverly Benham said.

“We're super busy,” she explained. “We have a lot of stock that we can't get ahold of but we're still getting things in maybe a little later than sooner.”

Benham has also noticed that customers coming in know what they want.

“People have done their homework,” she added. “They just come in and ask for things and they know what they want.”

Benham remains pragmatic though and knows the swell of people seeking supplements to ward off the COVID-19 virus may not last.

“Like everything else we take it one day at a time," she said. “We're open for business as long as we can be.”