COVID-19 numbers slowly going up in County of Barrhead 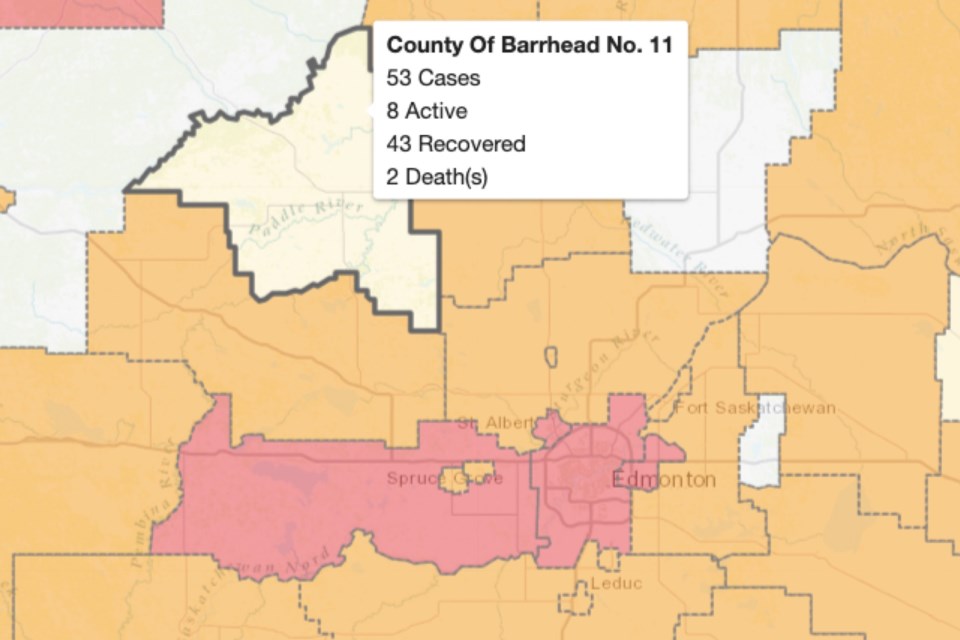 While still low compared to other areas, COVID-19 numbers in the County of Barrhead are showing no signs of disappearing. The number of active cases now stands at eight.

The number of active COVID-19 cases in the County of Barrhead climbed up to eight over the weekend, according to the geospatial map that lists all COVID-19 cases within Alberta.

On Jan. 7, there were a total of five active cases within the county, along with 43 recoveries and two deaths. By Jan. 11, the number of active cases had increased by three.

The spread of COVID-19 in Lac Ste. Anne County to the south remains incredibly high, with a total of 98 active cases, 244 recoveries and nine deaths.

The Town of Whitecourt is also being hit hard with 38 active cases, 69 recoveries and one death. Otherwise, Woodlands County has no active cases.

Chief medical officer of health Dr. Deena Hinshaw reported that a total of 639 new cases of COVID-19 had been identified over the past 24 hours. With 9,800 tests being conducted, that represents a testing positivity rate of 6.1 per cent.

The current number of active cases across the province now stands at 13,917. Hinshaw said there are 811 Albertans in hospital, including 130 who have been admitted to the ICU.

An additional 23 deaths were reported in the last 24 hours, bringing the provincewide death toll to 1,307.

“Our overall numbers underline the importance of the immunization program that is underway. I know that many are celebrating Alberta’s progress in distributing the vaccine, and rightly so. I also know that some have questions and even worries, as is normal with anything new,” she said.

"As I said in December, Canada has lined up the most robust regulatory system for new vaccines in the world. Health Canada moved quickly, but at the same time, there was rigorous testing and scrutiny applied to these vaccines, as with any other.”

Hinshaw noted that with schools across Alberta resuming classes earlier that day, they will begin reporting on school outbreaks later in the week.